Coup-attempting Gülenist group operates near 140 charter schools in US

The mastermind of the July 15 failed coup in Turkey, Gülenist Terror Organization (FETÖ) owns one of the largest charter schools networks in the U.S., with about 140 schools across the U.S.

Residing in Pennsylvania since 1999, FETÖ's ringleader, Fethullah Gülen, is known as the man who controls these schools and the $500 million annual income he gets for these from the U.S. government, according to some U.S. media reports. 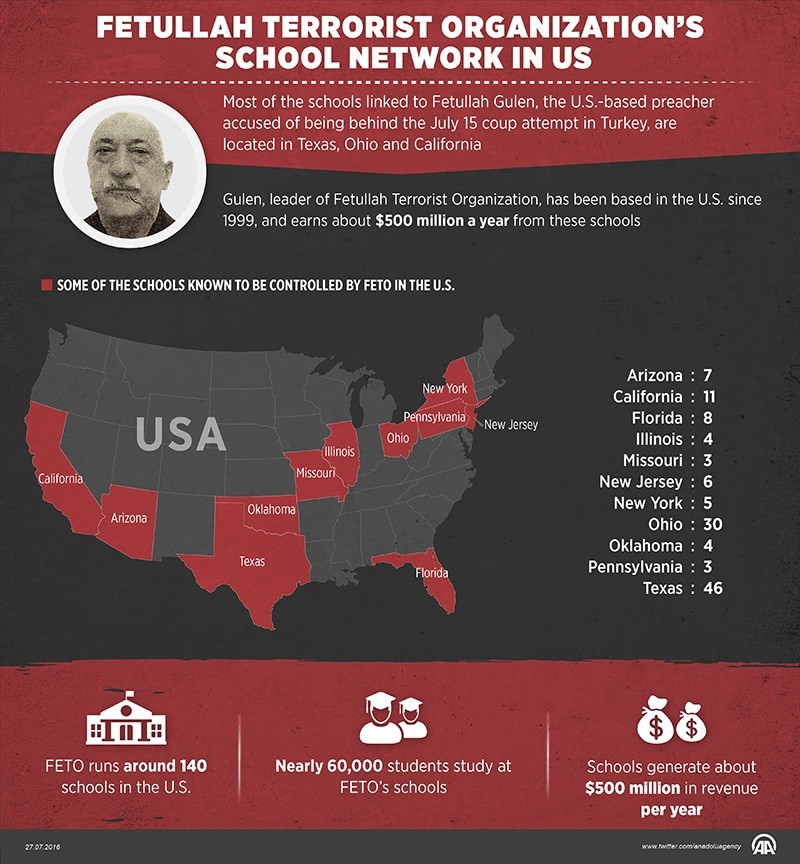 The schools in the U.S., some of which have changed names over time, were opened in the late 1990's and beginning of 2000's. Around 60,000 students attend the schools annually.

According to another recent article written by Valerie Straus at the Washington Post, FETÖ's 46 schools only in Texas, get $250 million from the U.S. government.

Having huge resources already from the charter schools, FETÖ's economic volume is even bigger when its other functioning structures -- such as companies, firms -- in the U.S. are considered.

While the administrators of FETÖ schools reject that they are connected to FETÖ's leader Gülen, the financial relationships between the schools and other FETÖ institutions reveal that they are.

FETÖ's schools in the U.S. are usually gathered under some umbrella organizations and are managed through foundations. As an example, there are 46 schools -- all under the name "Harmony" in Texas, 30 schools under the name "Concept" in and around Ohio and 11 campuses of schools in California under the name "Magnolia".

Some of FETÖ's schools are currently under the FBI investigation for irregularity, unlawful profit, corruption, fraudulent tender and forgery of documents.

The investigations first began on Dec. 11, 2013, after an FBI raid on the Kenilworth Science and Technology Academy in Louisiana's Baton Rouge city and spread to other FETÖ schools afterwards.

The first leg of the FBI investigation was over the irregularity of the 30 Chicago-based "Concept" Schools for transferring more than $5 million U.S. governmental support for the schools to its members. The investigation continues.

Investigations are also going on in 19 schools in Ohio, Indiana and Illinois over white-collar crimes. As part of the ongoing investigations, several documents of the Concept schools -- to which the investigated schools belong -- are retained by the police.

The investigation over Concept schools is conducted through the suspicion of violation of rules on competition for using U.S. government's E-Rate program that makes telecommunications and information services more affordable for schools and libraries in the U.S.

The first complaint applications to investigate FETÖ's charter schools in California last February and Pennsylvania were made by the Amsterdam&Partners LLP law firm. Then, the firm made the third investigation application in Texas.

In California's case, the firm made its application to the California Education Ministry to investigate financial flows of FETÖ's 11 Magnolia Schools.

According to the head of the firm, Robert Amsterdam, one senior manager who was hired in 2009 at Magnolia Schools, signed a contract with a firm for the 2011-2012 education term worth of $700,000. The same person became the head of that firm in a short period.

On April 4, 2016, Amsterdam&Partners LLP law firm submitted a lawsuit petition over another FETÖ related firm, Solidarity. According to Amsterdam, one of FETO's Harmony Schools' directors, who became head of Solidarity, was provided a construction business worth $22 million in only two years.

While the judicial processes continue over FETÖ's schools in the U.S., the American public has also started to express more inconvenience about the schools, according to U.S. media reports.

Last year, Congressman Raul Grijalva sent a letter to the Secretary of Education Arne Duncan, demanding a report over investigations on FETÖ's schools.

Also parents, whose children attend those schools, complain that these schools' teachers who come from Turkey "can't speak English" and have no "scientific qualifications", according to media reports.