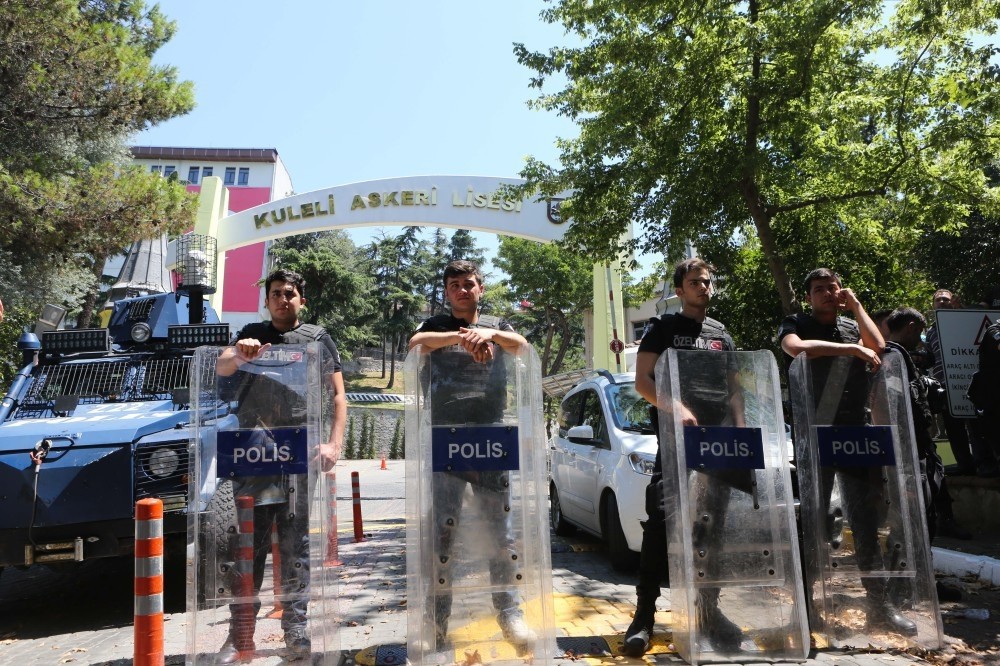 Police officers on duty in front of Kuleli Mlilitary High School on July 16 after the failed coup attempt.
by Mustafa Kırıkçıoğlu Jul 28, 2016 12:00 am

The government will take another step to prevent FETÖ members from infiltrating the military, shutting down military high schools and taking military academies under the National Education Ministry

After the July 15 failed coup attempt, a restructuring of Turkey's military draws closer, such as closing military high schools to prevent Gülenists from infiltrating the army at an early age, according to a decision made after a Council of Ministers meeting that convened under President Recep Tayyip Erdoğan on Tuesday. The restructuring plan, which primarily aims to cleanse military schools of cadets for decades who infiltrated the institutions on the orders of the Gülenist Terror Organization (FETÖ), consists of three different phases. New regulations that resemble arrangements made among police academies and police colleges after the Dec. 17-25 judiciary coup attempt would entirely change the structure of the Turkish Armed Forces (TSK).

In the first step, the government is pondering closing military high schools that are considered the earliest stage of the infiltration process. Since it was revealed after the confessions of Lieutenant Colonel Levent Türkkan, a putschist who was the aide of Chief of General Staff Hulusi Akar, that Gülenists were regularly stealing and cheating on military school entrance exams in previous years, officials claim that there is no possibility of separating Gülenist elements from normal students in military high schools. Students currently being educated in these schools will be transferred to other state schools.

On the other hand, the other vital location for military education, military academies, will continue their functions under the auspices of the National Education Ministry, but the government also plans to break off all students already being educated in military academies. After the closure of military high schools, military academies will procure needed personnel from normal state schools.

The Gülhane Medical Military Academy (GATA) will be assigned to the Health Ministry and continue its activities under the charge of that ministry. It has been revealed that the Gülen Movement infiltrated GATA for over two decades.

Speaking to Daily Sabah, Baki Kaya, a former staff colonel in the army, said that regulations should be imposed as soon as possible to expel Gülenist figures hiding in military schools and prevent defamation of the Turkish Armed Forces, which is already in a bad situation. He added that the educational process should change immediately to avoid possible interventions of the TSK into the legal administration. He said: "Today, we saw that Gülenists took possession of many critical positions within the military. That's why the government should rapidly take action. The closure of military high schools is not a big deal. There is not much specialized military education in these schools; they just have intense training in the summer term. One can get this training in a year. The important issue is the qualification of the curriculums and transformation of the main principals of the TSK. Beginning in high school, it is preached to cadets that the Turkish military is the true defender of the Turkish state and national interests, and they can intervene in 'dirty' politicians when needed to protect the country. The coup d'état has been been a kind of tradition in the Turkish military for 200 years. This has to be changed. The professionalization process should start in the TSK."

Kaya also said that the TSK made a crucial mistake in past decades by discriminating against certain parts of society, paving the way for Gülenists to infiltrate and factionalize easily in the military. "One of the main reasons that evokes today's situation is the hostile attitude of Turkish military forces toward conservative people in society, which are the majority in the country, in the last few decades. In the name of secularism, conservatives were excluded from the military just like other public enterprises, and Gülenist figures, which have been hiding their real identity, were stationed within the army using the method of "taqiyya" - a form of religious dissimulation mainly emphasized in the Shiite sect. They seemed to be non-religious people to avoid exclusion; however, after they became more powerful they started to intrigue against secular officers too. The TSK should embrace all parts of society without discrimination. It is the only way to prevent factionalization within the military," he added.

Speaking to Daily Sabah on the issue, former Office of the Chief of Staff director of intelligence, retired Gen. İsmail Hakkı Pekin, said: "These regulations should conclude as soon as possible. Military high schools seem to have failed in training patriotic officers, as they were seized by Gülenist officers in time. So they can be shut down. We can give weight to contracted officers for military academies like many countries worldwide already do. The Armed Forces should clean out any personnel is necessary to dismiss all military academy students, the government should do that. Otherwise, a resolution to this issue will not be possible."
Last Update: Jul 28, 2016 12:04 pm
RELATED TOPICS