Residents do not want to see military school in Kuleli, headman says 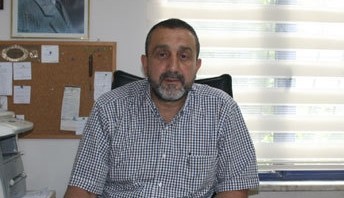 by Sena Alkan Aug 03, 2016 12:00 am
Can Cumurcu, the headman of the village of Çengelköy, who was injured in the protests against Gülenist Terrorist Organization (FETÖ)-linked coup forces in the district who came from the Kuleli Military High School on Istanbul's Anatolian shore, said on Monday thatÇengelköy's residents do not want to see soldiers at the military high school anymore.

Even though two weeks have passed since putschists from the military school killed 22 Çengelköy residents on the night of the July 15 attempted coup, outrage among the district's people has not abated.

Speaking to Daily Sabah at his home in Çengelköy after he was discharged from hospital, Cumurcu said Çengelköy's residents do not want to see anybody wearing epaulettes in their neighborhood after the coup attempt, and that the military school should be turned into either a library, university or social facility to erase the bitter memories of the coup attempt.

"We were like brothers with the soldiers from Kuleli. The Çengelköy artisans treated them as if they had been their own sons. We gave those soldiers priority even in while waiting at the barber; we were like a family here. After all those dark things we have experienced, no; we do not want soldiers next door," Cumurcu said, adding that the residents there feel as if they have been stabbed in the back.

"My father and grandfather were commanders at the military school," Cumurcu continued. "Despite the fact that it was home for my family for years, we do not want to see soldiers there anymore. It is a huge facility, it can be used in effective ways, but not as a military school, after our soldiers from that school killed our civilians."

Çengelköy is the Kuleli Military High School neighbor, and it takes only minutes to reach from the town. That is why Çengelköy was the site of clashes during the attempted coup. From midnight until dawn, Çengelköy residents stood against the coup attempt while dozens of coup soldiers fired at them and held them hostage for hours. Among those killed there were 22 civilians, including a middle-aged woman and a 22-year-old university student who were trying to run away from gunfire, in addition to dozens more who were injured.

Cumurcu was shot and was taken to the closest hospital. A video recording from the coup night shows Cumurcu calling out to the coup soldiers that deployed opposite the civilians, saying, "Our military does not fire at its own civilians."

The headman said only minutes after his call, the coup soldiers shot him in his back. "They did not let other civilians take me to the hospital immediately. Only hours after was I transferred to the hospital through the back streets in Çengelköy, and dozens ofÇengelköy residents who were severely injured in the district started to be transferred."

Cumurcu added that around 10:30 p.m., a soldier from the Kuleli Military High School arrived in Çengelköy and announced that residents had to go home since a coup was under way.

"I asked him what he was doing here? Go back to your school. There are scores of civilians enjoying their night in here, go back." Facing a large amount of resistance, the soldier retreated to the military school, firing into the air. "Nearly an hour later, dozens of putschists, including high-ranking coup soldiers, arrived and fired at residents who tried to prevent the coup soldiers from gaining ground," Cumurcu said.

They shot at those resisting and unarmed civilians tried to run away from them through Çengelköy's narrow streets. The putschists took nearly 50 civilians hostage on the main street and instructed them to not move or they would be killed.

Çengelköy is located between the Selimiye Military Barracks in the Altunizade district of Üsküdar, the renowned Kuleli Military High School and the last access road to the Bosporus Bridge in Beylerbeyi. Putschists from the Kuleli Military School are believed to have taken over the Çengelköy shore connecting the military school and the Bosporus Bridge, but faced resistance from nearly 250 of Çengelköy's residents who tried to stop them.
RELATED TOPICS