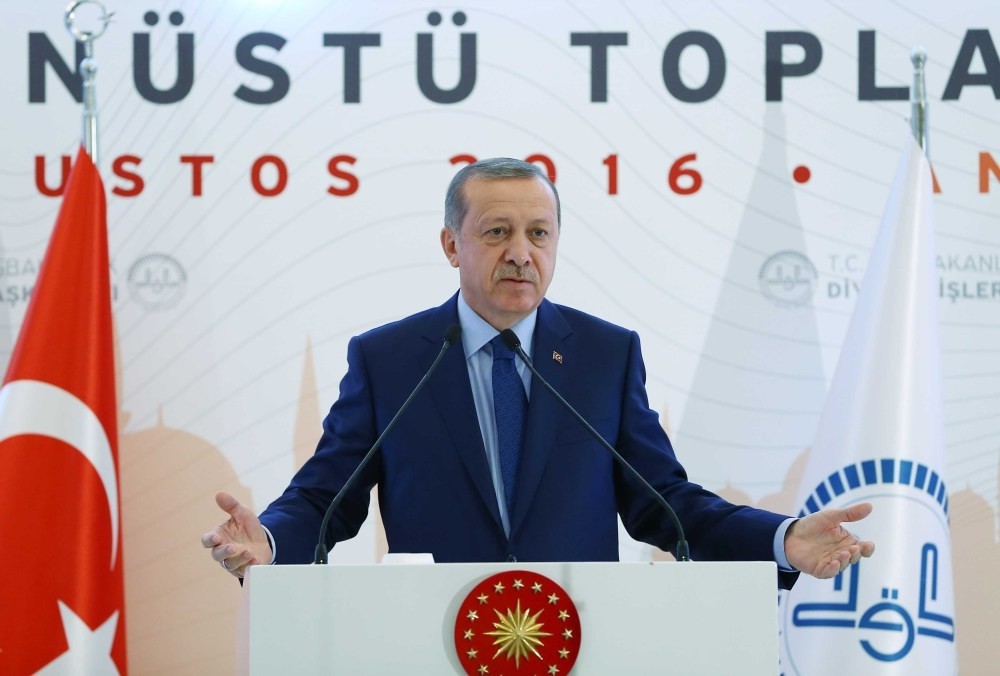 The FETÖ exploits religion and sees no problem in using arms to reach its goals, President Erdoğan asserted. He also said that the terrorist organization spreads its propaganda through a worldwide network of schools

Speaking Wednesday at the opening of the "Unity, Solidarity and Future Perspective against the July 15 Coup Attempt and the Exploitation of Religion" extraordinary religion council held in Ankara, President Recep Tayyip Erdoğan said: "Anyone who continues to adhere to the delusions of the charlatan, the terrorist in Pennsylvania [Fethullah Gülen] from this moment on, has accepted the consequences," adding that it is now time to fight Gülenist Terror Organization (FETÖ) rather than suspecting the organization's intentions. Erdoğan said Turkish politics has experienced important incidents within the last three years, and "The armed coup attempt we went through on July 15 represents the bloodiest and daring dimension of this process." He said that 238 is not a number to be underestimated – the total number of people who died resisting the coup attempt. Calling FETÖ a virus-like structure spread throughout Turkey for the last 40 years under the cover of providing education, he said, "Assuming that we could find a minimum common ground, I, like members of all groups, assisted them despite our various disagreements." He also said FETÖ was supported by the Turkish people, politicians and statesmen from various backgrounds, including the late leaders Turgut Özal, Süleyman Demirel and even Bülent Ecevit, as they refer to Allah and Prophet Muhammad (Peace Be Upon Him) and pretend to be engaged in charitable acts.

Admitting that for a long time the Justice and Development Party (The AK Party) could not see this group was actually an instrument to reach covered purposes, Erdoğan said he treated with the members of FETÖ with the idea of bringing the religious groups who had been pushed to the periphery into the center. "I regret not being able to uncover, throw off this organization's mask. I know we have to account to both Allah and the nation. May Allah and my nation forgive us," Erdoğan said.However, he added that the government had reservations about the FETÖ since 2010, and especially since 2012. Explaining that he had serious doubts about the operations and lawsuits against members of the Turkish Armed Forces, he said, "I wasn't convinced by charges brought against, and the arrests of certain commanders with whom I had worked for years," Erdoğan said, stressing that the 2013 coup attempt particularly revealed the real face of the organization.

"The period of suspicions ended and the period of struggle has begun," Erdoğan said, especially pointing to the phase following the legal and security scandals in December 2013 and the violence on July 15. "The time has come to hold the perpetrators of this assault against Turkey and its people accountable and to take stock," he said, adding that there is no explanation to excuse FETÖ members who remain a part of it, while statements from those who express remorse will be approached with suspicion.

Drawing attention any further possible outcomes of the July 15 coup attempt, Erdoğan added, "Had it not been for the precautions we have taken, especially in the judiciary after Dec. 17 and 25, 2013, the coup attempt would have been a much more serious threat performed by not only a group of armed terrorists within the military, but also joined by police forces and the judiciary."

He said containing religious elements cannot be a reason to justify the FETÖ's actions, as the loyalty of the organization's followers do not prove their righteousness, but only the wrongness of the path they are on. Attempting to draw parallels between FETÖ members and the Hashashin (assassins) of 11th century Lord of Alamut Hassan Sabbah, Erdoğan said the majority of FETÖ members are educated and completely loyal individuals with successful careers who turned into assassins, killers and suicide bombers.

Further touching on the closure of military high schools and taking military academies under civilian control under the National Defense University as well as transferring control of the gendarmerie to the Interior Ministry, Erdoğan said religious institutions might also need reforms.
RELATED TOPICS