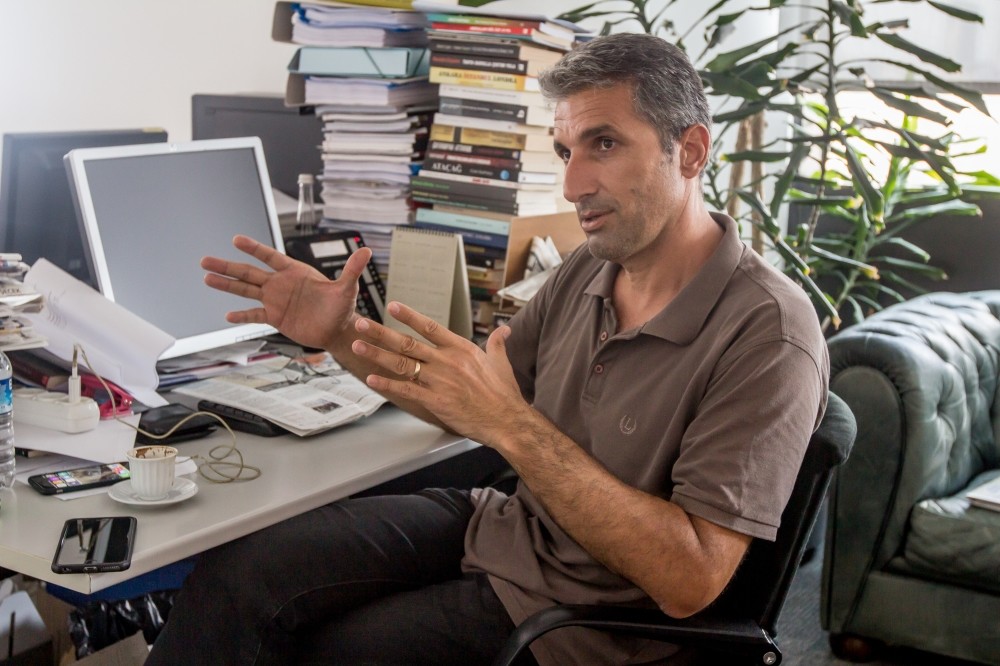 Prominent journalist and author Şener spent more than a year in jail because of a FETÖ plot. He spoke to Daily Sabah about how he has fought Gülenists and how they orchestrated the coup attempt, backed by the CIA

Nedim Şener, (right) an investigative journalist and one of the most prominent victims of the Gülenist Terror Organization (FETÖ), in an interview with Daily Sabah, said he is sure the group was behind the failed July 15 coup attempt and that the CIA was tacitly backing it. Şener, who spent 13 months in jail after writing a book detailing the criminal activities of FETÖ, said the U.S. and FETÖ believed political polarization in Turkey could be used to topple President Recep Tayyip Erdoğan and that the nation would not react. Since it failed, FETÖ leader Fethullah Gülen has been trying to shift the blame by arguing that it was a plot by Erdoğan, Şener said.

DS: How did the Gülenist Terror Organization (FETÖ) stage a plot against you?

I was a reporter for the Milliyet daily. The Ergenekon investigations had not yet started. As I talked to a friend from the police department, he said that some people were committing fraud on evidence in the Hrant Dink case. I found out that FETÖ's police officers, who were supposed to shed light on the case, played a part in the murder. FETÖ needed a plot for the Ergenekon operations to kick off. The Father Santoro and Hrant murders as well as the Zirve Publishing House massacre allowed FETÖ to kick off the operations by saying that these crimes were committed by a neo-nationalist Ergenekon terror group. Everything started after a bomb was found in Ümraniye in 2007. Dink used to receive death threats. One thing is clear: The murder was planned in Trabzon and the police turned a blind eye to it. Dink lived in İstanbul at the time and the Istanbul police department neglected it as well. FETÖ sued me after I published my book on the Dink murder in January 2009. I faced jail for up to 32 and a half years. Interestingly, the murderer faced up to 20 years. As a result of an advice letter, they claimed that I was planning to murder the then Prime Minister Tayyip Erdoğan's son Bilal Erdoğan just like Dink was murdered. Then they started to spy on me and wiretap my phone. It is written in the letter that I am a member of the Ergenekon terror group. They included me in the indictment and I was arrested and locked up in 2011. All this was because I had written years ago that FETÖ was responsible for the murder of Dink. 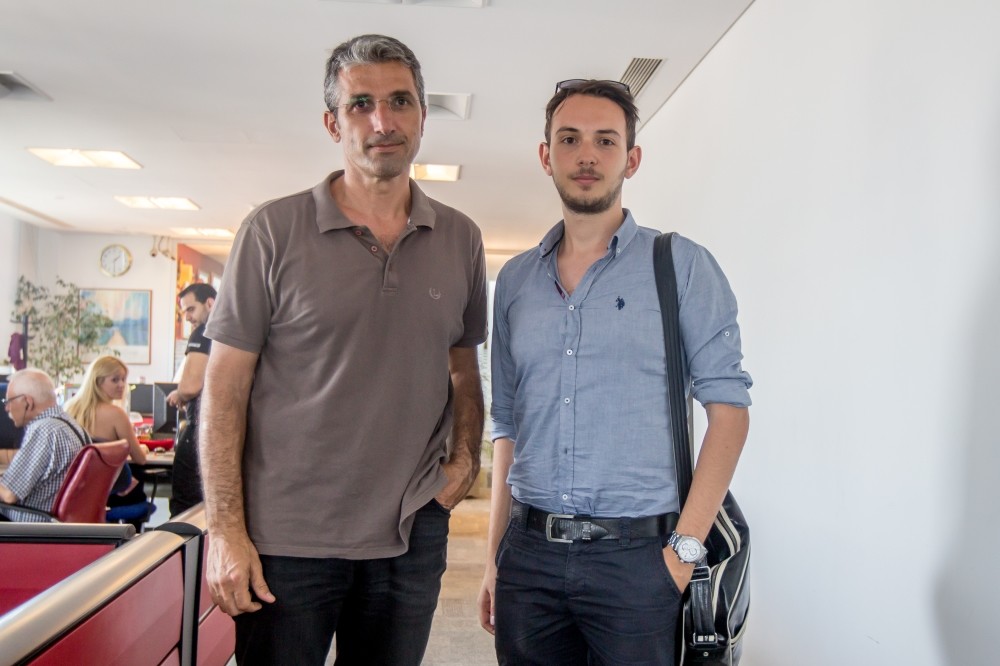 DS:There are allegations that FETÖ put pressure on people investigating the Dink murder. Are they true?

Inspectors from the Prime Ministry were investigating the murder. They were threatened by Ramazan Akyürek. In general, FETÖ's network in the judiciary and the police department helped them to whitewash their crimes. Their network in the media is also crucial. Look, Adem Yavuzarslan, Nazlı Ilıcak and Bayram Kaya claimed in every book they wrote that I was a member of the Ergenekon terror group and was trying to put all the blame on police officers in an attempt to smear them. I have been fighting [against these allegations] since 2009. I found out that the fraud in this murder could greatly damage the law in Turkey. That's why I felt the need to write the book.

DS: The FETÖ-affiliated Zaman daily claimed you and Ahmet Şık were not arrested because of journalism while Şık's book was banned even before it was published and you were locked up. The media in the west is trying to bash Turkey on freedom of the press though it advocates for Zaman daily journalists now. Is there a double standard over this?

I said it at that time, too. Advocating for us and protecting FETÖ journalists are not the same thing. Look at what the Zaman daily wrote and you will see what kind of activities they were in. You cannot talk about freedom of the press while you are a part of the operation to lock up journalists. The west should question why journalists do not react to the closure of many newspapers and TV channels linked to FETÖ. People even say this is the right thing to do, because these media organs were part of an operation. FETÖ would not have been able to expand like it has were it not for their media groups. They label their own media as opposition media and the west buys this lie because Gülen is their man.

DS: Do you think Gülen is an agent used by the West?

FETÖ was in the cosmic room of the state. They were close enough to the Chief of the army and the president to kill them. They are in the intelligence agency, judiciary and the police department. They can get any information they want. Anybody would love to work with such an organization. Anybody would protect them if need be. The west and the U.S. think they are always right so long as they are the strong one. However, the reality is different. What matters is the reality.

DS: Gülen gathered the western media shortly after the July 15 coup attempt and claimed he was not behind it. Do you think Gülen's FETÖ is behind the attempt?

You do not even have to ask me if I think. I said it from the beginning based on the information I received.

DS: You hint at a collaboration between FETÖ and the CIA in your columns. Was the coup staged in a joint FETÖ-CIA effort?

I wrote in my book about FETÖ in 2009 what I will say today as well. FETÖ is an intelligence service under the control of the CIA. I think the U.S. is behind the coup attempt because they are linked to FETÖ. There is a polarization in Turkey, which I can see in columns and articles against Erdoğan. This polarization was supposed to be used to legitimate the coup. The putschists thought that the people would not mind if Erdoğan was toppled. They thought polarization would stoke the flames of a grand civil war. They were wrong. They cannot make any analysis as a result of their failure. They are trying to weather it by saying that the coup attempt was a scenario [hatched by the government].

DS: What is the link between Gülen's FETÖ and the CIA?

Şenkal Atasagun [former intelligence agency head] said previously in 1999 and 2003 that FETÖ is a U.S. project and linked to the CIA. Sönmez Köksal [former intelligence agency head] said in a 1997 report that FETÖ worked with the CIA. MİT Istanbul head Nuri Gündeşin said the same thing in his book as well. He claimed that most English teachers in FETÖ schools are CIA agents, which he learned at a high level meeting held by Gülenists. The MİT has it on record; there are documents.

DS: Did the CIA have an influence on the decision when Gülen's residence permit in the U.S. was extended?

DS: Do you think the U.S. will extradite Gülen? Have Gülen's days expired in the U.S.'s service?

No, the U.S. will not extradite Gülen. The U.S. still wants to use FETÖ. The U.S. has agents in FETÖ schools across the world. FETÖ can be used for various operations in every part of the world. Would you extradite him? Gülen still has many more agents within state institutions that he can make use of.

There are some in the international arena as well as Turkey who claim the coup attempt was a scenario written by President Erdoğan. What do you make of that?

Think of a scenario. It is about a coup attempt. We make a deal. You are the army and I am the ambitious Erdoğan who wants an executive presidency with more powers. We play the scenario. I get more powers and the executive presidency when the scenario is over. What do you get? You get to be a traitor and have a life sentence. What kind of a scenario is this? Gülen said it was like a Hollywood movie. He is trying to cover his dirt, knowing that the west will buy it.

DS: What can FETÖ do now? Is the danger over?

FETÖ can carry out small-scale operations. Some politicians and prominent figures can be assassinated, Kurdish politicians in particular. The grand powers that planned this coup attempt will not easily accept the defeat and give up. They will not stop. We should be prepared for anything. We cannot know what FETÖ will bring on in three months.

Dink, the editor-in-chief of the Agos weekly, was killed in broad daylight by Ogün Samast, 17, on Jan. 19, 2007. His murder caused public outrage and was initially blamed on ultra-nationalists angry over Dink's comments on Turkish-Armenian relations, a sensitive issue for nationalists. A judicial inquiry into his murder saw Samast and his accomplices jailed, but the alleged role of public officials in the murder have long remained in the shadows. A renewed investigation laid bare the links between murder suspects and police officers with ties to Gülenists. Although Gülenist officers are not accused of directly ordering the hit on Dink, they are accused of negligence for ignoring tip-offs and intelligence reports indicating that Dink might be assassinated before the murder.