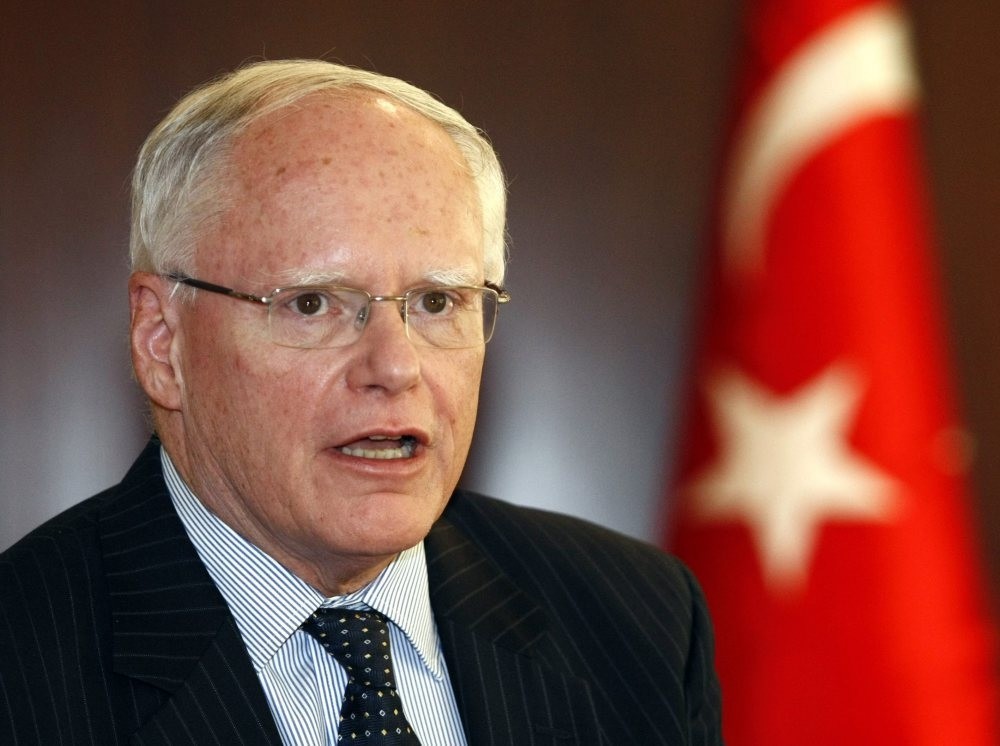 by Ragıp Soylu Aug 08, 2016 12:00 am
The U.S. government could make Pennsylvania-based fugitive, retired imam Fethullah Gülen's life very difficult and monitor his activities closely until the courts decide on Ankara's extradition request, according to a former U.S. ambassador.

James Jeffrey, the U.S. ambassador to Turkey from 2008 to 2010, who is now with the Washington Institute, described the Gülen Movement as an illegitimate, covert force and agreed that the Turkish government should remove Gülenist elements from the bureaucracy while upholding the rule of law and due process. Jeffrey is a known critic of Gülen's secretive organization that attempted a coup last month with his followers in the Turkish military.

According to U.S. diplomatic telegrams leaked by Wikileaks, on Dec. 4, 2009, Jeffrey wrote about Gülen's application for permanent residence status in the U.S. and gave background on Gülen and his movement. Saying that Gülen faced charges in Turkey of plotting to overthrow the state, Jeffrey mentioned a sermon in 1986 in which Gülen is heard declaring: "Our friends, who have positions in legislative and administrative bodies should learn its details and be vigilant all the time so they can transform it and be more fruitful on behalf of Islam in order to carry out a nationwide restoration." Holding a green card now and living in rural Saylorsburg, Pennsylvania, it was doubted that Gülenists had infiltrated the Turkish National Police (TNP), and they "have found no one who disputes it."

Additionally, Jeffrey said: "TNP applicants who stay at Gülenist pensions are provided with the answers in advance of the TNP entrance exam. … Gülen's lack of transparency creates doubt about his motives and leads to suspicions about what lies ahead." As for the aspects of concern in the allegations that the U.S. government is somehow behind the Gülen Movement, Jeffrey concluded: "The U.S. is not 'sheltering' Mr. Gülen and his presence in the U.S. is not based on any political decision."

Daily Sabah: The Turkish government and opposition parties believe that Fethullah Gülen and his disciples ordered the coup attempt. However, people in Washington disagree with this assessment. Why?

James Jeffrey: There are three reasons. There are skeptics in Washington, but I'm one of the less skeptical people. I have had experience with the Gülenist movement. I don't have too much information about penetration in the military, although I read the confessions of some people who were arrested after the coup. I saw this penetration of the Justice Ministry and police. This is an illegitimate, covert force. There is no doubt about it. So why do people question this in Washington? Reason number one is it is very hard to find concrete information about the Gülenist movement. As we have seen, they have been able to perpetrate a massive military uprising without much warning. So they are a hard group to find out. Secondly, people in Washington focus on the issue of Fethullah Gülen because the government has never stopped talking about it. That's a separate issue of legal culpability. The issue of whether the Gülenists are behind the coup is one of fact, political analysis and that kind of thing. So the two are really somewhat confused. The third reason is people in Washington are very concerned that President Erdoğan will use the effect to basically cleanse the bureaucracy in the country of anybody opposed to him. And that is just between the 50 or 60 percent of the population based on the last elections – that's a lot of people. So people are nervous about that. And that nervousness feeds back skepticism about what the government says. Maybe perhaps it is unclear for them, but I think, in this case, the government has a point this time. This is why you have all these analyses in Washington.

DS: There is a strong criticism in Washington about the Turkish government's mass dismissals. What should the government do if the state bureaucracy is invaded by these Gülenist operatives other than suspend them?

JJ: The answer is, if you accept that fact, I do and everybody in Washington does, and then yes, the government has to cleanse the bureaucracy. The problem is there is a very deep principle in the U.S. of freedom of information. The only law with elements of proof defined in the constitution is the law on treason, which requires two independent witnesses to be prosecuted. And the reason is from our own experience in the revolution, we knew that is very easy for any government to brand anybody who is not clearly on the side of the government as potentially a member of some other group, some movement or something else. There is great questioning of the rule of law in Turkey. That is a separate issue from the question of whether there is a Gülenist movement, but it is having an effect on people who are working with Turkey.

DS: Do you believe Gülen is leading a cult-like organization?

It is a cult-like organization. It is ruled from the top. We don't know who is at the top. The assumption is Fethullah Gülen, but I don't know whether he is the effective person making decisions. It is not open. So who is a member is secret. And it uses its influence in government; the latest example would be this coup. Another example would be the Sledgehammer case, and we have an example that they prosecuted Turkish spy chief Hakan Fidan for negotiating with the PKK's leader Abdullah Öcalan in 2012, and there is another example – the revelations of corruption against the government back in 2013. These are all politically motivated; they weren't independent actions by the justices. They were done by the movement to go after the opponents of the movement.

DS: There is a spat between Turkey and the U.S. on Gülen's extradition. Is there a possibility that it could risk the Turkish-American partnership and alliance?

I don't think the alliance would break down, but I think the alliance would be damaged. Many Turks who support President Erdoğan believe we should put Gülen on a plane. If he has to be sent anywhere, it can't be government action. It has to be by a court order. It can take a while. That might be a good thing for Turkey because right now nobody in America will send anybody to a country whose judicial system is in total uproar. Nobody knows whether you can get a fair trial when thousands of judges and prosecutors have been removed. It is total confusion. So a little bit of time is good. The constant attacks on the United States should stop. Yet we keep getting these aggressive comments. It is very troubling for the U.S. Damage to the relationship is not something America does and Turkey decides, damage to the relationship can also be something Turkey does and America decides.

DS: Is there anything that the U.S. could do while we wait for Gülen's extradition?

The U.S. government could make Gülen's life very difficult. It could start to monitor Gülen, and it could become difficult for him to manage his actions. It could also prevent people from visiting him. And similar steps could be taken with administrative actions.
Last Update: Aug 08, 2016 1:04 am
RELATED TOPICS