Erdoğan to US: You are either with democracy or terrorist Gülen 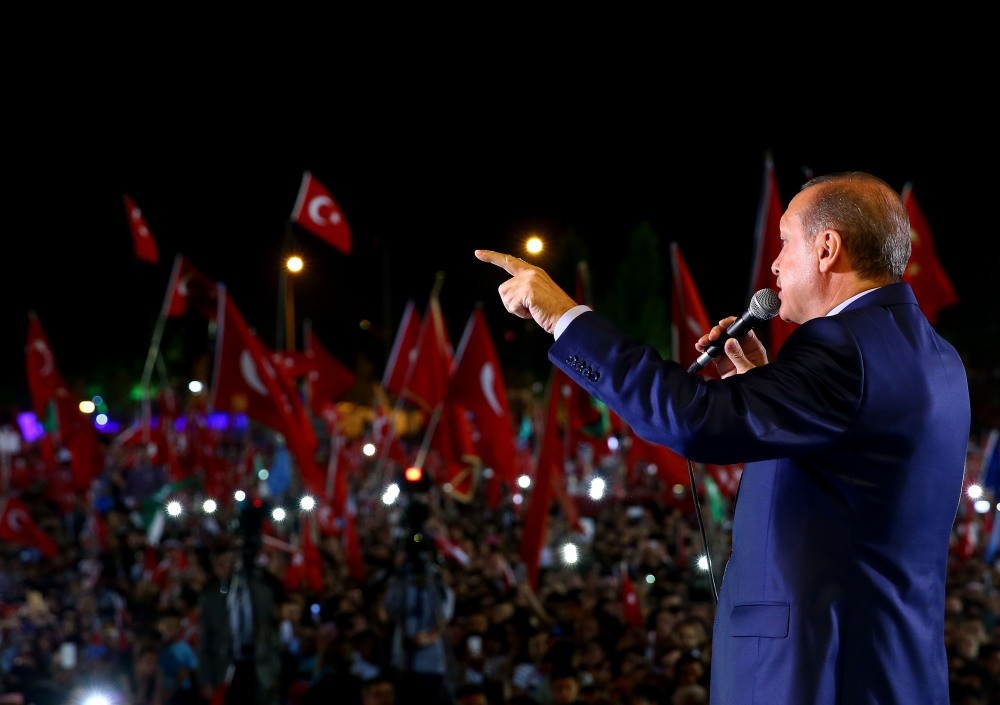 President Erdou011fan addressing a mass crowd at the Presidential Complex in Ankara on Wednesday.
by Yunus Paksoy Aug 12, 2016 12:00 am

While the U.S. sends mixed signals regarding the extradition of Gülen, which puts it in a tough spot in the eyes of the Turkish public, President Erdoğan sent an ultimatum, saying the U.S. has to choose between a terrorist and its close ally Turkey

Ankara continues to harshen its tone amid the ongoing dispute with Washington over the extradition of Gülenist Terror Group (FETÖ) leader Fethullah Gülen. President Recep Tayyip Erdoğan on late Wednesday urged the U.S. to make a choice between "coup-plotting Gülen and Turkey." Addressing a crowd in front of the Presidential Palace in Beştepe, Ankara, Erdoğan said: "Sooner or later the U.S will make a choice. Either Turkey or FETÖ," he said. "Either coup-plotting terrorist Gülen or democratic country Turkey. It has to make this choice," he said. The U.S. has remained relatively indifferent to Ankara's warnings about and requests for Gülen's extradition. Both U.S. Secretary of State John Kerry and other American officials have repeatedly said they need to see real concrete evidence for the extradition. The reluctance from the U.S. to extradite the accused person blamed for the coup led to anger and suspicion among the Turkish public. Many Turks believe that the U.S. was behind the coup attempt in addition to FETÖ. There are also allegations that the CIA and the U.S. are in cooperation with FETÖ in various ways.

In a recent interview, Hüseyin Gülerce, who was the general director of the Gülen Movement-affiliated Zaman daily and at the forefront of the Gülen Movement for many years, claimed in comments to Daily Sabah that the FETÖ and Gülen received professional help from the CIA and have been part of a plan to invade Turkey for decades.

Gülerce presented another claim regarding the alleged assistance, saying: "Around 100 imams travel to Pennsylvania three times a year to get orders from Gülen. Does the U.S. not follow the periodical travels of 100 imams closely? Does Washington have nothing to say about this?"

He further claimed that there have always been high-ranking Gülenist police officers who traveled to the U.S. for professional training.

The U.S.'s reactions to the coup attempt in its early hours also led to mixed reactions among millions of Turks. While Kerry said Washington hopes for stability and peace in Turkey, he also said the U.S. supports the democratically elected government in Turkey after the coup failed.

With regard to the CIA's alleged professional help provided to the FETÖ, Nedim Şener, a journalist and author who was framed by the FETÖ, claimed, "The FETÖ is an intelligence service under the control of the CIA."

He also claimed that most English teachers in Gülen schools are CIA agents, which a former National Intelligence Organization (MİT) head supposedly learned at a high-level Gülenist meeting. "The MİT has it on record; there are documents," he added.

A statement from U.S. Central Command (CENTCOM) Commander Gen. Joseph Votel that Washington's "allies" are being locked up in Turkey as part of the fight against coup plotters also caused some comment.

"The putschist is in your country. You are feeding him," Erdoğan had said in response to Votel's statement.

In response to Votel's statement, Markar Esayan, an Istanbul deputy for the ruling Justice and Development Party (AK Party) and Daily Sabah columnist, told Daily Sabah that he was "having a very difficult time grasping what the U.S. has been trying to do since the very beginning." Calling it Washington's struggle to side with democracy and the Turkish people, Esayan said: "We are watching the events in dismay. I call it [U.S. President Barack] Obama's ineptitude in times of crises."

Gülen has been accused of leading a long-running campaign to overthrow the state through infiltration of Turkey's state institutions, particularly the military, police and judiciary, forming what the government calls the "parallel structure."

It is not the first time that Ankara and Washington have exchanged ultimatums in a dispute. Erdoğan had set a stern ultimatum for the U.S. in early February over the close alliance between Washington and the Syrian PKK affiliate Democratic Union Party (PYD) and its People's Protection Units (YPG) militia. "Are you on Turkey's side or the side of the PYD [and its armed] YPG terrorist organization?" he said.

Relations further soured following a statement from U.S. State Department spokesman John Kirby that the U.S. does not consider the PYD or the YPG to be terrorist organizations.

Another incident played a crucial role in straining bilateral relations in late May. Several photos appeared in the media showing U.S. soldiers in supporting roles during a ground offensive wearing YPG and the Women's Protection Units (YPJ) insignia. The incident drew strong reactions on social media in Turkey, with some accusing the Obama administration of having a two-faced strategy against Turkey, which is a NATO ally.
RELATED TOPICS