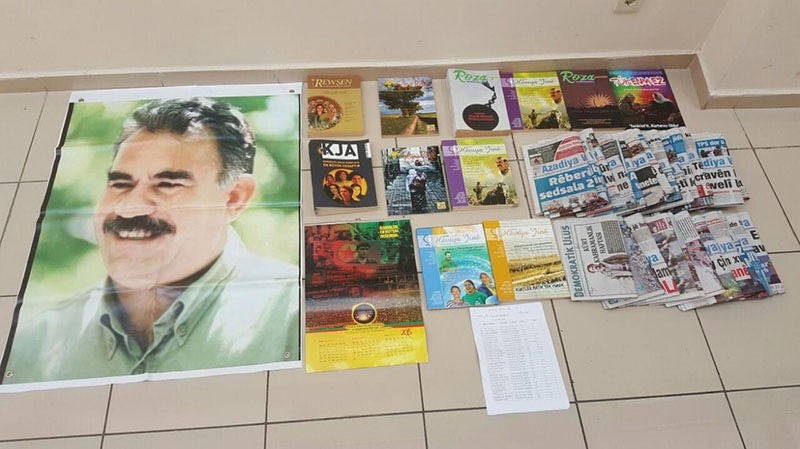 PKK terrorist propaganda material seized during the operations in u0130zmir (DHA Photo)
by Daily Sabah with AA Aug 16, 2016 12:00 am

An anonymous police source identified one of the detainees as the leader of the YDG-H in the Aegean area. Homemade explosives and organizational documents were seized during the operations, the source added.

Numerous arrests have been made across Turkey since a July 2015 suicide bombing that killed dozens of people in the Suruç district of Şanlıurfa province near the Syrian border.

Most of the suspects detained have alleged links to terrorist organizations such as the PKK, Kurdish Communities Union (KCK), YDG-H, DAESH and the ultra-leftist Revolutionary People's Liberation Party Front (DHKP-C).

Senior PKK leaders and PKK-linked political figures have previously leveled threats, indicating that western provinces will be targets as well. In an interview with military was only in the mountains. Then it spread to towns and provinces. It will be everywhere now."

Pro-Kurdish Peoples' Democratic Party (HDP) Co-Chair Selahattin Demirtaş said in September: "My brothers who live in the west, if we are silent about Cizre [in the southeast], if we do not pour into the streets, believe it or not, this fire will burn everywhere. Do you think that Bodrum is too far from Cizre. It is not. Everywhere is close."

Eight people suspected of having links with the PKK were detained in an operation late Sunday.

Counterterror special operations units captured the suspects in operations in the Sultangazi and Gaziosmanpaşa districts of Istanbul. The eight suspected PKK militants were mentioned in intelligence reports as likely to commit illegal activities after Aug. 15.

In addition to the eight detained suspects, four unlicensed pistols, two hunting rifles and almost 250 buckshot shells were found in the operation.

Prior to that, a senior PKK figure, Rakip Yardımcı, who is also known by the code name "Cigerhun," was arrested Friday in a counterterror operation in the Istanbul district of Bağcılar.

Yardımcı was in the "grey category" of the Interior Ministry's mos- wanted terrorists list and a TL 300,000 ($100,000) cash reward was announced for information leading to his arrest.