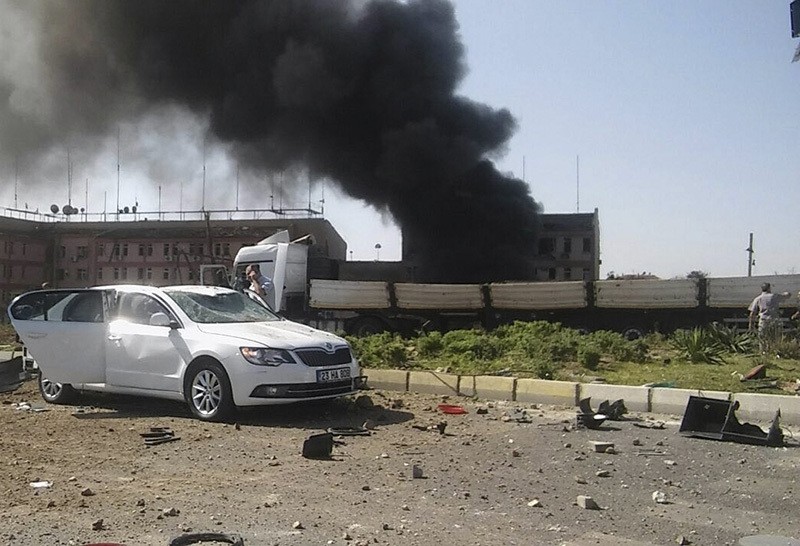 A car bomb exploded at in front of the police department headquarters in eastern Elazığ province, killing at least three people and injuring 217 others.

Elazığ Governorate confirmed in a statement that three police were killed in the attack and 146 people, including civilians, were injured. 14 of the wounded remain in critical condition.

Prime Minister Binali Yıldırım, Defense Minister Fikri Işık, Interior Minister Efkan Ala, Health Minister Recep Akdağ, Family and Social Policies Minister Fatma Betül Sayan Kaya and Turkish Chief of Staff Hulusi Akar visited Elazığ after the blast. In a press conference given near the blast site, Yıldırım said that 217 injured people were transferred to hospitals after the attack. 72 of those were discharged since, Yıldırm said, adding that 85 police officers and 60 civilians are still being treated.

Regarding the chain of terrorist attacks conducted on Thursday, Yıldırım said that the PKK terror organization has now lost its chain of command and it desperately attacks wherever it can. He added that Turkey has raised its level of alarm after latest terrorist attacks.

A two-meter deep and five-meter wide pit emerged at the blast site. The effects of the blast was felt throughout the city. Early footage from the explosion scene showed the smoke rising from the area, while the large building complex receiving heavy damage. The police residences located near the explosion scene were also damaged from the blast.

Meanwhile, the Radio and Television Supreme Council banned all broadcasts about the deadly attack in the interest of public safety and ongoing police probe.

The blast came hours after two other terrorist attacks hit eastern and southeastern provinces of Van and Hakkari, in which three people were killed and near 80 others were injured.

Later in the day, three soldiers and a village guard was killed in clashes and a subsequent attack on an armored vehicle in Hizan district of eastern Bitlis province.

Chairman Kemal Kılıçdaroğlu, leader of the main opposition Republican People's Party (CHP), pledged full support to the government yesterday in the fight against terrorism, asserting that the CHP is ready to do whatever is necessary to tackle terrorism.

Earlier in August, Cemil Bayık, a senior leader in the Kurdish Communities' Union (KCK), an umbrella organization that includes the PKK, threatened to spread violence across Turkish cities.

Speaking to PKK-affiliated Fırat News Agency (ANF), Bayık threatened Turkey, promising that war would be waged everywhere, including in the mountains, across plains and in the cities, explaining that the "war is not limited to the mountains."

Defining this as "a new stage," Bayık said: "The [Turkish] state and local police will not be the dominant power[s] anymore. […] The war is carrying on in the metropolis and it will be conducted [elsewhere]. […] The killing of police officers and armed conflict in the cities will reveal the truth. The police will no longer live in the cities as comfortably as before."

Bayık previously stated that the terrorist organization aims to topple the government led by President Recep Tayyip Erdoğan and the AK Party.

In March, four days before a car bombing killed 35 civilians in Ankara, Bayık told the British daily The Times that the PKK is the main obstacle for the realization of Erdoğan's dreams.

Turkey has a democratic government despite being situated in a troubled region and international monitors have repeatedly confirmed that Turkish elections are free and fair.

The PKK-listed as a terrorist organization by Turkey, the U.S. and the EU-resumed its 30-year armed campaign against the Turkish state in July 2015.

Since then, more than 600 security personnel have been martyred and more than 7,000 PKK terrorists have been killed.