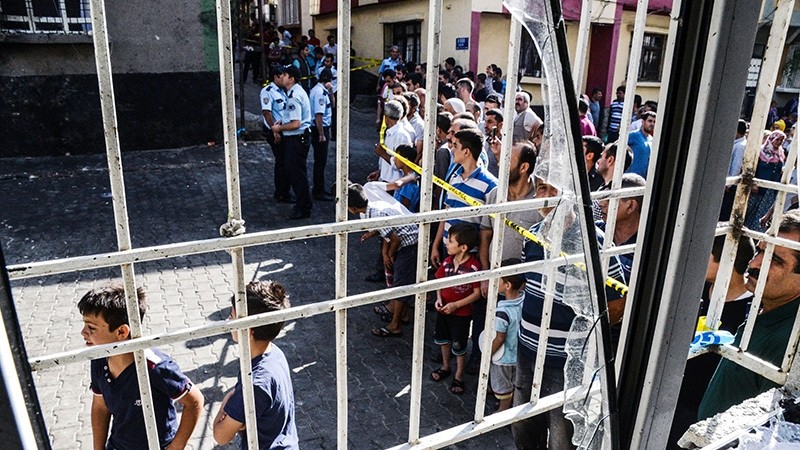 People stand near the explosion scene behind police cordon following a late night Daesh terrorist attack on a wedding party that left at least 50 dead in Gaziantep in southeastern Turkey (AFP Photo)
by Daily Sabah with AA Aug 21, 2016 12:00 am

World powers strongly strongly condemned the terrorist attack which took place late Saturday evening in Turkey's southeast and reaffirmed solidarity with the Turkish government and its people against terrorism.

Embassy of the United States in Ankara condemned the deadly attack, and pledged to stand with Turkey against terrorism.

"We condemn the barbaric attack on innocent civilians last night in Gaziantep. We stand by our ally Turkey and pledge to continue to work closely to defeat the common threat of terrorism" the U.S. Embassy said in a statement.

The White House also released a statement strongly condemning the 'barbaric' attack, saying: "Our thoughts and prayers go out to the families and loved ones of those killed, and we wish a speedy recovery to those injured. We stand with the people of Turkey as they defend their democracy in the face of all forms of terrorism."

In a statement, Turkish Republic of Northern Cyprus President Mustafa Akıncı also condemned the attack and expressed his country's support and solidarity.

"Terrorist violence has manifested itself this time in the atmosphere of a wedding in Gaziantep. I condemn this terrorist attack."

United Nations Secretary-General Ban Ki-moon extended "his deepest sympathy and condolences" to the families, urging for the perpetrators to be brought to justice and international counter-terrorism efforts to be intensified.

UN Special Coordinator for the Middle East Peace Process Nickolay E. Mladenov also condemned the brutal attack in his Twitter account, saying that the people and government must join forces to fight terror.

"We stand united in solidarity with our Turkish allies in this difficult time. We remain determined to fight terrorism in all its forms," Stoltenberg said.

German Chancellor Angela Merkel also said that Germany stands by Turkey in the fight against terrorism.

"Our deepest sympathies are with those who lost their loved ones, and victims," Merkel said in an official letter to Prime Minister Binali Yıldırım.

"The government and people of Pakistan are deeply anguished and saddened by the news of the latest terrorist attack in Turkey, targeting a wedding ceremony in the southeastern province of Gaziantep. Reports indicate at least 30 innocent lives lost and more than 90 injured. The heartlessness of this brutality is evident from the fact that a celebration was turned into mourning," said a Pakistani Foreign Ministry statement issued early Sunday.

"Pakistan condemns this despicable act of terrorism in the strongest possible terms. We extend our profound sympathies and condolences to the brotherly people and Government of Turkey. Our thoughts and prayers are with all those who have lost their loved ones. We also pray for the speediest recovery of the wounded" the statement read.

"This attack in Gaziantep follows recent acts of terrorism in Van, Bitlis, and Elazığ. We have no doubt that those seeking to disturb the peace, stability, and internal harmony of Turkey will never succeed. We remain firm in our belief that the fraternal people of Turkey will decisively defeat the scourge of terrorism with their resolute will and unshakable resolve," the statement added.

"We condemn the brutal attack on the Gaziantep wedding and stand with the Turkish people, united versus terror. Our condolences to the families of the victims," said Greece's Foreign Ministry on its official account.

French President François Hollande said in a statement that he "strongly condemns the despicable terrorist attack in which at least 50 people were killed last night and 100 injured in Gaziantep, Turkey during a wedding."

"France extends to the authorities and people of Turkey its condolences and sympathy ... It stands with all who fight against the scourge of terrorism," he added.​

"Let us pray for the victims and the injured and for the gift of peace for all," the pope said on Sunday from St. Peter's Square.

Speaking to Anadolu Agency Sunday, Sweden's Foreign Minister Margot Wallstrom "vehemently condemned" the attack."We have all kinds of cooperation for the common fight against terrorism with Turkey," she added.

Italy's President Sergio Mattarella sent a letter of condolence to President Erdoğan about the incident.

Mattarella said in the letter: "The blind and devious murderous fury of terrorism has transformed an occasion of joy and happiness into a tragedy, whose brutality and absurdity hurts and offends all humanity."

"At this time of great suffering for your country, [we] want to convey to the families of the couple and of all the victims feelings of solidarity and deep sympathy of the Italian people and my staff, together with the most sincere wishes for a speedy recovery to all the injured," he said.

In an official statement, EU foreign policy chief Federica Mogherini and European Commissioner for Enlargement Negotiations Johannes Hahn extended their "deepest" condolences to the families and friends of those killed, and wished a speedy recovery to the injured.

"As [the] European Union, we express our solidarity and sympathy with the government and people of Gaziantep and of all Turkey. And we will continue to strengthen our cooperation with the Turkish authorities to prevent and counter terrorism," the statement said.

Azerbaijan's President Ilham Aliyev also sent a letter of condolences to Erdoğan and expressed his sorrow at the attack.

"We are extremely outraged by this horrible tragedy and other terror acts treacherously committed in your country, and consider it important and necessary to carry out a joint, consistent, and resolute struggle against terrorism and all its manifestations," he said.

"We strongly condemn the barbarous terror attack [AND] offer condolences to the victims' families and wish a speedy recovery to those injured," the statement from Barzani's office said.

"It became obvious one more time that terror and radical ideas are threatening citizens' safety and daily lives," the statement added.

Georgia, Kazakhstan, Iran, Israel, Romania, Latvia, Lithuania and Estonia all have condemned the terror attack as well with statements from officials.