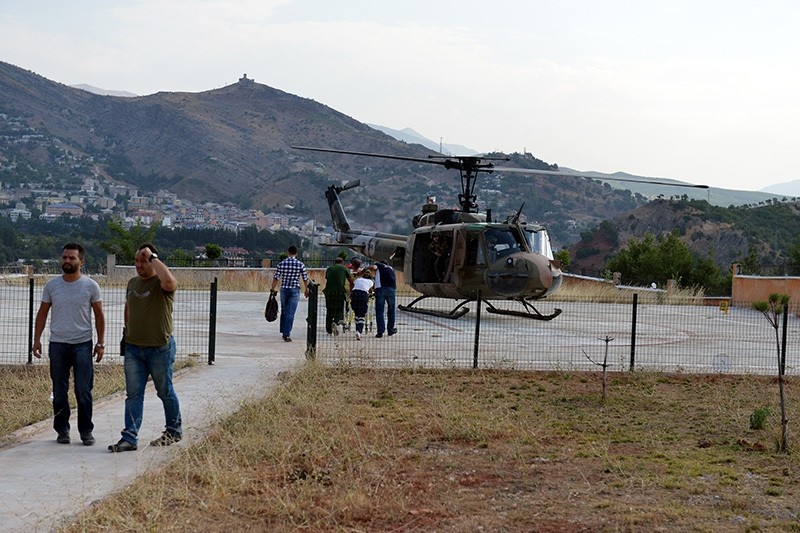 Wounded police officers in Nazu0131miye district were transferred to hospital in Elazu0131u011f province with helicopters in the morning. (AA Photo)
by Daily Sabah with Reuters Aug 22, 2016 12:00 am

One soldier was killed and three police officers were wounded in a clash with PKK terrorists in the Nazımiye district of eastern Tunceli province on Monday, amid a spike in violence carried out by the PKK and Daesh terror groups along with Gülenist terror-cult.

PKK terrorists launched simultaneous attacks against police headquarters, the gendarmerie command and district governorate in the dead of the night to infiltrate the town. The attacks were repelled, however, clashes are ongoing in rural areas of the district.

Security forces that were backed by helicopters sealed the area and sent in reinforcement and authorities imposed a curfew in the district throughout the day.

Elsewhere on Sunday, the PKK targeted a military vehicle in the Viranşehir district of southeastern Şanlıurfa province, killing one soldier and wounding four others.

The PKK terrorist organization had previously claimed responsibility for a car bomb attack on Thursday in the eastern city of Elazığ, that left three dead and hundreds wounded, including civilians.

Meanwhile on late Saturday, a suicide bomber, as young as 12, blew him or herself up at a wedding ceremony in the city of Gaziantep, killing 51 people. President Recep Tayyip Erdoğan said the attack appears to have been carried out by DAESH.

That attack was the deadliest in a series of bombings in Turkey this year blamed on DAESH.

NATO member Turkey is also roiling with the aftermath of a failed coup attempt by soldiers affiliated with the Gülenist terror cult on July 15 that killed an estimated 340 people, with about 100 of them putschists.

The PKK, designated as a terrorist organization by the U.S. and the EU, continues its armed campaign against the Turkish state since 1984. More than 40,000 people, mainly ethnic Kurds, have died in the clashes. The Syrian Kurdish YPG, which is battling Daesh in northern Syria and is backed by the U.S., regarded as PKK's offshoot in Syria by Turkey.