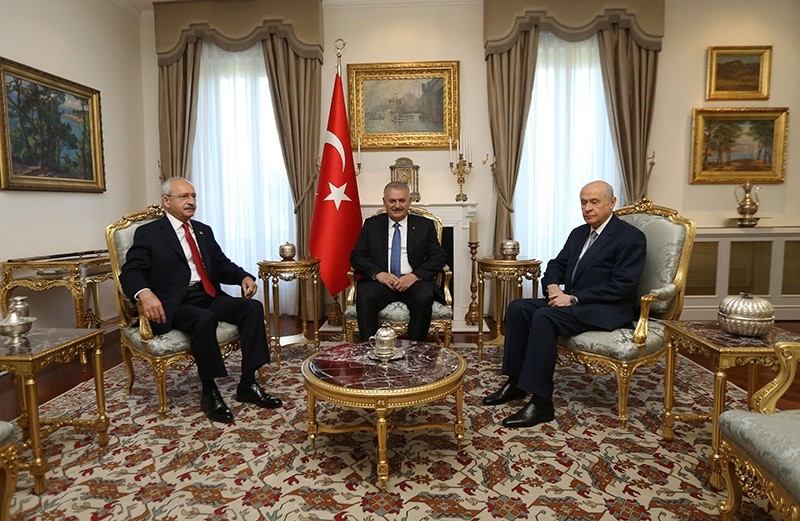 On Monday,, ruling Justice and Development Party Chairman and Prime Minister Binali Yıldırım met with the leaders of the opposition Republican People's Party (CHP) and Nationalist Movement Party (MHP), for the second time since the failed attempted coup July 15, that was organized by the Gülenist Terror Group (FETÖ). Yıldırım welcomed CHP Chairman Kemal Kılıçdaroğlu and MHP Chairman Devlet Bahçeli at the Prime Ministry Office in Çankaya, and the three-hour meeting that followed focused on Turkey's counterterrorism efforts against FETÖ, the DAESH and PKK terror groups and recent developments in Syria, as well as a new constitution.

During the meeting, which aims to maintain the spirit of solidarity and unity displayed at the rally, the three leaders discussed Turkey's fight with terror, as well as the latest developments in Iraq and Syria. The prime minister provided information to the opposition leaders about the fight against FETÖ and measures taken by the authorities. The leaders further exchanged views on the "mini" constitutional amendments package, while agreeing that the Peoples' Democratic Party (HDP) should distance itself from the PKK terrorist organization, to avoid being seen as their political wing.

Commenting on the meeting between the three party leaders, AK Party Istanbul Deputy Erkan Kandemir said the invitation from Yıldırım was quite important, as much as the acceptance of the invitation by the two opposition leaders. "We have to stand by one another against any attack from DAESH, the PKK, FETÖ, or any other terrorist organizations that we might hear of tomorrow for the first time," adding that the spirit of unity and solidarity of Turkey will repel any further attacks. Kandemir said that Turkey has always had the spirit of unity in its genes, stating that now the political parties are showing this spirit. Kandemir added that the current solidarity in the Turkish society has been witnessed by the entire world, especially after the Yenikapı rally, which marked the end of the democracy watches following the coup.

MHP İzmir Deputy Oktay Vural touched upon the importance of the meeting between the ruling party and the opposition parties, adding that the process should be supported by taking concrete steps. "Such politics is a step toward understanding each other, unlike the dominant understanding of the political polarization present ahead of July 15." Underlining that the recent threats of coup and terror concerns the whole country, Vural said, "We might have our different political opinions, but we meet on the basis of common values and to build a rivalry upon these common bases will lead to quite beneficial results for Turkey." Vural stressed that the gathering of Turkey's party leaders as part of the ongoing understanding of solidarity would maintain a strong stance against foreign countries, as well as those marginal groups that would like to take advantage of the post-coup atmosphere.

CHP Eskişehir Deputy Utku Çakırözer added that the solidarity that arose on July 15 between the ruling party and the opposition parties in the Parliament has considerably remained until now, adding that the process of dialogue should be maintained and strengthened by concrete steps. "A sound dialogue between the ruling party and the opposition has vital importance, not merely in Turkey, but also to clear the air in the West of doubts concerning Turkey." Çakırözer said that the ongoing dialogue process should be maintained in order to reiterate the principle of the state of law, adding that the HDP should be included in the process, as they are the fourth-largest party in Parliament. Çakırözer added that the government should be extra careful about the treatment of unjustly-arrested innocent suspects, as well as listening to recommendations of opposition concerning the fight against DAESH and the PKK.

Prime Minister Yıldırım met separately with the two opposition party leaders on July 19, four days after the failed coup attempt. The leaders also met at the Presidential Compound on July 25 upon an invitation by President Recep Tayyip Erdoğan, and the four leaders attended the massive pro-democracy rally in defiance of the coup attempt at Istanbul's Yenikapı Square on Aug. 7.