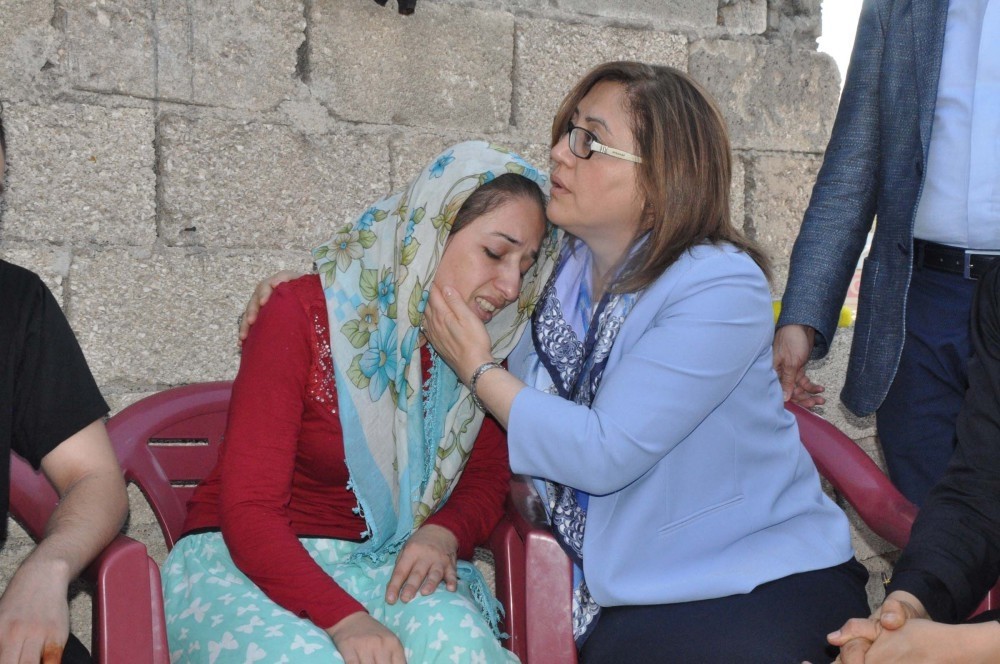 The newly wed Akdoğan couple, whose wedding was targeted on Saturday by DAESH's suicide bombing in southeastern Gaziantep, warned about the pro-PKK HDP's incitement, urging them to be mindful against provocateurs

The Gaziantep couple, Nurettin Akdoğan and Besna Akdoğan, whose wedding was soaked in blood on Saturday with a suicide bomb attack by DAESH that killed 54 people and wounded 94, said the actions by pro-PKK Peoples' Democratic Party (HDP) on Sunday were "provocative actions" and urged the public to be mindful of those who aim to sow discord among the people. The Akdoğans said they warned people about provocation. "There were provocateurs [at the funeral]. Victims are from our community. They should not do this," he said. "We never harmed anybody. I want the perpetrators to be found and punished. They have turned our most beautiful day into hell. We lost all our relatives, they are all dead."

On the day of the funeral for the 37 wedding guests who died in the tragic incident, deputies from the pro-PKK Peoples' Democratic Party (HDP) marched and sang slogans glorifying the PKK and its imprisoned leader Abdullah Öcalan before attacking police officers.

The party and their deputies are accused of having links to the PKK. The party has long been criticized for its close ties to the PKK terrorist organization. HDP Co-Chair Selahattin Demirtaş is under fire for his party's pro-PKK stance.

The HDP, which has been slammed for keeping silent over PKK attacks while condemning DAESH bombings, released a list of specific provinces where it urged people to take to the streets on its official Twitter account.

Many have criticized the release of the list by the HDP, saying the pro-PKK party is encouraging ethnic conflict. The Kurdish Communities Union (KCK), an umbrella organization that encompasses the PKK, has issued a total of 140 calls for the Kurdish people to rise up in the wake of Saturday's suicide bombing.

A dramatic call for Kurds to rise up was made on Oct. 6-7, 2014, when the HDP was accused of instigating riots that resulted in the deaths of over 50 people.

"What did they want from us? Why are these incidents not stopped? My whole family is gone. Find a solution now," Besna Akdoğan said during the officials' visit. Gaziantep governor Ali Yerlikaya, Mayor Fatma Şahin and several deputies in the province attended the visit.

Şahin previously stressed that people from other provinces were brought in to Gaziantep to create chaos. Stressing that she gave the necessary instructions to authorities to closely monitor people who were brought in, Şahin said that locals reported that they did not recognize a number of visitors who appeared at the funeral ceremony.

The suicide bomber who carried out the deadly terror attack at the Akdoğan wedding on Saturday night is a child between the ages of 12 to 14. He either self-detonated or was detonated by others, President Recep Tayyip Erdoğan said.

Speaking to reporters in Istanbul on Sunday, Erdoğan said that the brutal terror attack was carried out by a teenager, and initial findings indicated it was perpetrated by DAESH.

The blast took place in a predominantly Kurdish neighborhood of the city, while local reporters and officials said that the family hosting the wedding is from eastern Turkey. Reports suggest that 300 to 500 people were in the area when the explosion took place.
RELATED TOPICS