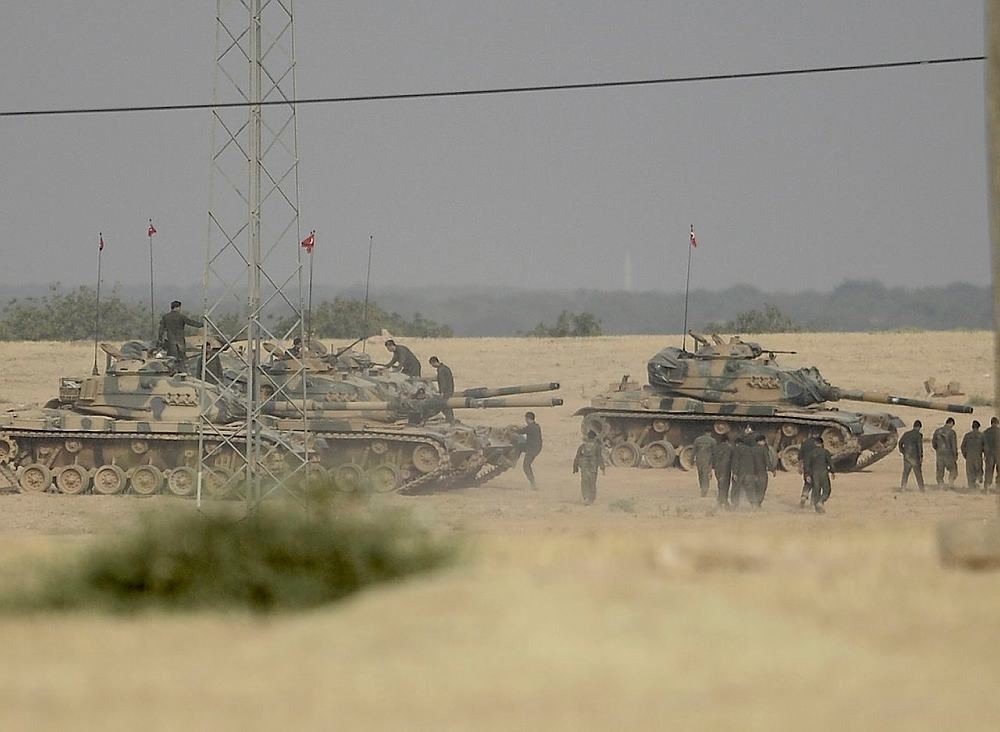 Amid terror threats on multiple fronts, Turkey and the moderate opposition groups it is supporting in Syria continue to clash with DAESH militants after successfully purging the terrorist organization’s presence from Jarablus

Turkey and the Free Syrian Army (FSA) continue to strike DAESH targets in northern Syria amid a surge in domestic terror stemming from the PKK terrorist organization, its Syrian branch the Democratic Union Party (PYD) and its armed wing the People's Protection Units, (YPG) as well as the Gülenist Terror Group (FETÖ), led by U.S.-based retired imam Fethullah Gülen.

Following a DAESH suicide bomb attack at a wedding party in the southeastern province of Gaziantep, killing at least 54 people, many of them children, Turkey and FSA factions launched a cross-border operation into the northeastern town of Jarablus, which was controlled by DAESH. In less than a day, the operation was successful and DAESH was removed from the town.

Collaboration between the Turkish military and the FSA has been a source of hope for the Syrian people combating DAESH. Ankara had urged the U.S.-led coalition to support the FSA more directly but after its calls went unheeded, Turkey decided to take matters into its own hands. The Syrian Arabs and Turkmens, who largely constitute the FSA, have received strong backing from the Turkish military in Operation Euphrates Shield.

Jarablus is critical for Turkey. Ankara has repeatedly asserted that liberating the city from DAESH terrorists would enable the coalition to establish a buffer zone in the area that would stop the influx of new refugees coming from other regions across Syria.

The Turkish Armed Forces (TSK) shelled YPG targets Thursday that were reportedly trying to move toward the south Syrian town of Jarablus from northern Manbij despite warnings from the army. Speaking on condition of anonymity due to security concerns, opposition and security sources north of Manbij told Anadolu Agency that the Turkish Army had warned the PYD during Operation Euphrates Shield to retreat to the Sajur River, which originates in Turkey and flows into the Euphrates in Syria.

In spite of these warnings, the group continued to advance, but had to return to the Sajur River after the TSK shelled the area.

Despite U.S. Secretary of State John Kerry telling Foreign Minister Mevlüt Çavuşoğlu in a telephone call Thursday morning that PYD units were moving to the east of the river, the group continued its offenses amid the conflict between Turkish-backed moderate opposition forces and DAESH terrorists.

As the opposition groups advanced in Jarablus and DAESH started retreating from the area, the PYD soon went on the attack. The group later recaptured the villages of Amarinah, Magara and Balaban and two hills north of Manbij after it advanced north of the Sajuh River again Wednesday. The TSK found PYD members using the "Syrian Democratic Forces" (SDF) label and shelled Amarinah at 6:00 p.m. local time (1500GMT) on Friday.

Security sources, which spoke on condition of anonymity due to fears for their safety, said PYD fighters would not be allowed to advance in the area and that the operation would continue until the group retreated.

Another security official said earlier that the presence of either DAESH or the Syrian wing of the PKK in the Syrian town on the Turkish border was "unacceptable."

The PYD — the Syrian affiliate of the terrorist PKK — has been expanding its dominance west of the Euphrates River since late December, reinforcing its presence in the region using the fight against DAESH as a pretext. The PKK terrorist group's Syrian affiliate PYD had gathered the groups close to it under the SDF name.

The Syrian Arab Coalition (which includes Jaysh al-Thuwwar, the Burkan al-Firat Operations Center, Al-Sanadid Forces, and Brigade Groups of Al-Jazeera), along with the Assyrian Military Council, also joined the SDF. The administration and majority of the group were still held by the PYD. After the SDF was founded, the U.S. bolstered its support for the PYD.

The group enlarged its borders through the northern parts of Syria's city of Manbij – located in the northwestern Aleppo province – after it seized control of the district from DAESH with the support of Arab fighters and U.S airstrikes earlier this month.

With a desire to form a PYD-controlled strip in northern Syria along the Turkish border, the PYD then targeted areas west of the Euphrates River with U.S. help. The PYD aims to sever the geographical ties between Turkey and Syria by capturing the area between Jarablus and Azaz once they grab Manbij.

Ankara has frequently voiced its concern over the activity of the PYD's armed People's Protection Units (YPG) along the Turkish border and has been rigid in its stance in not allowing the PYD militant group to found any kind of de facto Kurdish state in northern Syria. Ankara claims the PYD enjoys close connections with the PKK, including military and logistical support through underground tunnels.

Earlier Monday, Foreign Minister Çavuşoğlu reiterated that Turkey was determined to fight DAESH terrorists inside Turkey and in Syria, after a suicide bomber attacked a wedding party, killing at least 54 people, many of them children. Çavuşoğlu said that Turkey would provide every kind of support needed to "cleanse" Turkey's border with Syria of terrorists.
Last Update: Aug 26, 2016 5:57 pm
RELATED TOPICS