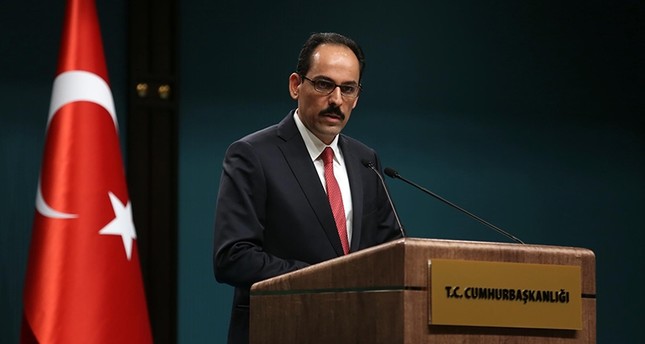 Presidential spokesperson İbrahim Kalın said on Wednesday that a cease-fire to prevent the killing of more civilians in Syria would be discussed in bilateral talks with President Recep Tayyip Erdoğan at the G20 summit in China.

Speaking to reporters in Ankara, Kalın stated that the killing of innocent people in Aleppo is unacceptable, adding: "There is an organization pioneered by the dear president for a cease-fire here before Eid [al-Adha]. This will also be on the table with interlocutors at the G20."

"We strongly condemn such initiatives that portray this [Operation Euphrates Shield] as a movement against the Kurds in Syria [and] as an operation to block Kurds' achievements," he said.

Kalın indicated that Turkey condemns attempts to portray the operation as if it were targeting the Kurds, saying that Turkey has no problems with Syrian Kurds and aims to clear its borders of all terrorist groups, including DAESH and the PKK-affiliated Syrian Democratic Union Party's (PYD) armed wing, the People's Protection Units (YPG).

He also noted that statements made by U.S. officials equating Turkey with the YPG in the fight against DAESH are unacceptable and that a cease-fire or agreement being made with terrorists is out of the question. He added that the PYD/YPG are offshoots of the PKK terrorist organization.''You cannot defeat a terrorist group with another terror organization,'' Kalın said, highlighting that Turkey is against all types of terrorist organizations.

Kalın also noted that fighting terrorism is Turkey's priority and will continue to be so regardless of whether it receives support from allies or not. However, he noted that terrorism is a global problem and its solution requires global cooperation.

Concerning the cross-border operation in northern Syria conducted by the Turkey-backed Free Syrian Army (FSA), Kalın said the objective of the operation is to clear DAESH terrorists from a 90 kilometer (56-mile) stretch of territory along the Turkish border.

Regarding the Gülenist Terror Group (FETÖ) threat, Kalın said the president would also discuss FETÖ leader Fethullah Gülen's extradition to Turkey with President Obama. He also said it is unacceptable that European states had not sent high-level officials to visit Turkey since the failed coup attempt on July 15 orchestrated by FETÖ, speaking after several lower level European trips in recent weeks.

Share on Facebook Share on Twitter
Previous in War On Terror Turkey has prevented the entry of over 52,075 people from entering... Next in War On Terror The Turkish Air Forces carried out an operation on identified targets...
DAILY SABAH RECOMMENDS