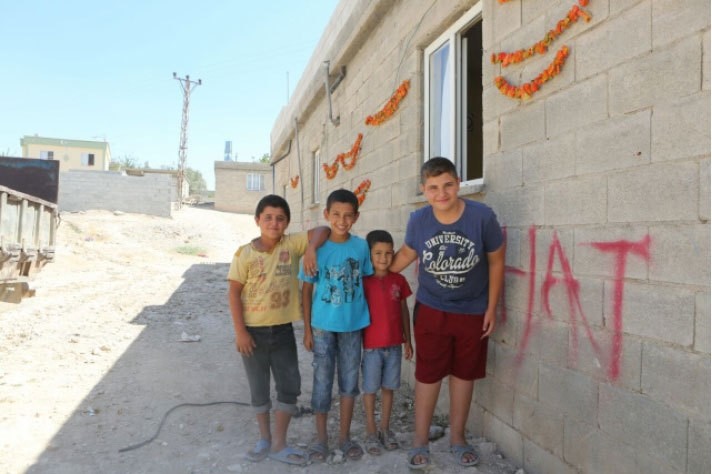 Operation Euphrates Shield brought not only liberation to Syrian town of Jarablus from Daesh terrorism, but has also removes locals from a life of fear on the Turkish side of the Syrian border

Apart from the joy of the people of Jarablus who saw their town liberated from DAESH terrorists, the people living in villages on the Turkish side of the border have expressed their gratitude and relief following Operation Euphrates Shield. Kıvırcık, the village where Operation Euphrates Shield was launched last week, had existed in a state of panic for the past two years due to the DAESH threat from across the border. Daily Sabah talked to the people of Kıvırcık who shared their experiences of DAESH shellings and rocket attacks. The headman of the village, Mehmet Küçükaslan, said that the operation started even later than the people had expected.

"There are seven villages along the border. Locals were quite uncomfortable and scared because DAESH used to send mortar shells and rockets from across the border," he said, adding that Operation Euphrates Shield fixed their problems. As DAESH shelled Turkish villages indiscriminately, children in the area were scared and could not attend school. Thirteen-year-old Vedat Küçükaslan, a relative of the village headman, said that he had to get used to DAESH shelling. "We had no other choice until the operation started. It was a relief for us," he said. Walking through the streets of Kıvırcık, four children caught our eye. Bearing the same surname - Aslan - Mehmet, 14, Mithat, 13, Efe, 12, and Uğur, 7, told me how they can now easily attend school, play games outside and walk around without the fear of DAESH.

"DAESH shelled a dispensary and a mosque from across the border," Efe said. When asked about whether they were used to living with the fear of DAESH, Mehmet and Mithat said that "they had to."

The village headman Küçükaslan said that the seven villages along the border are grateful for the military operation. He stressed that the operation had to be done to secure civilians both along and across the border.

The children also expressed their gratitude for Operation Euphrates Shield. Vedat said that "somebody had to do something to stop DAESH." Vedat had lost an uncle who died in a DAESH attack.

Kıvırcık was where the first Turkish tanks rolled through on their way to Syria while some Free Syrian Army (FSA) fighters took shelter before the start of the operation. "The first 18 Turkish tanks rolled into Syria from here. Around 800 FSA fighters also marched across the border, apart from additional Turkish troops," he explained.

He also showed where some FSA fighters had spent a couple nights at a place within the village.

Mithat said that one or two of his relatives joined the FSA ranks to fight DAESH. "After the operations started in northern Syria, my relatives thought they could also contribute to the anti-DAESH fight," he said.

Kıvırcık played an important role in the recruitment of FSA fighters because of its location as a transition village.

NUMBER OF FSA RECRUITS ON THE RISE

Küçükarslan, who has been active around the villages along the border while people joined the FSA to fight DAESH in northern Syria, said that an increasing number of people wanted to take part.

"Even though there are many willing people who want to be in the FSA ranks, the FSA picks out those who can be useful," Küçükaslan said. He said, however, that the number of willing fighters is likely to further increase in the long term.

Recently, Jaysh al-Nasr spokesman Mohammad Rashid told Daily Sabah that the FSA's victory in northern Syria boosted their confidence. "The FSA's advances in Jarablus thanks to Turkey's help bolstered our morale," he asserted.

Another commander fighting in Aleppo, who wanted to remain anonymous due to security concerns, also spoke to Daily Sabah. He said that the number of new recruits coming in following the Jarablus operation has significantly increased.

Backed by Turkey, the FSA launched an offensive against Jarablus last week with the aim of clearing DAESH from the area. Following Ankara's repeated warnings that it will unilaterally clear its southern border of DAESH terrorists should the international community not take action, the Turkish military embarked on an cross-border operation.
Last Update: Sep 05, 2016 11:42 am
RELATED TOPICS