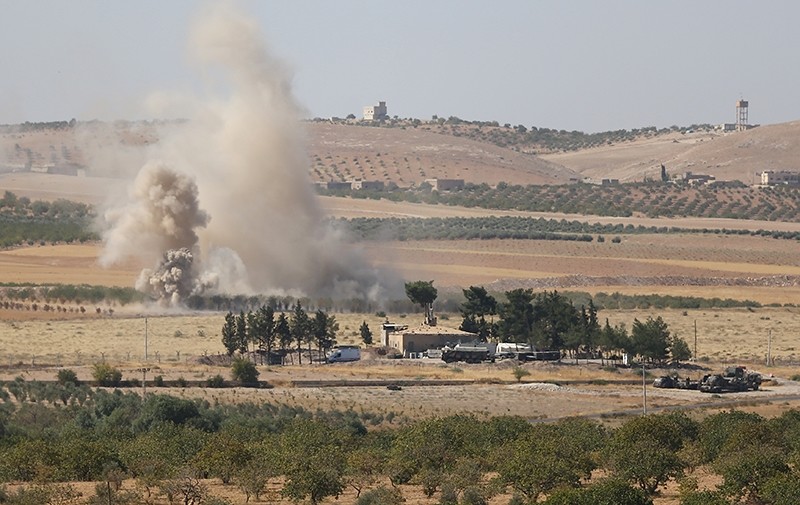 Turkish soldiers help to defuse and dismantle the numerous bombs and booby-traps that Daesh had left behind in Jarablus. (AA Photo)
by Daily Sabah with Reuters Sep 02, 2016 12:00 am

The Turkish military said Friday that its air strikes destroyed three buildings used by Daesh in north Syria on the 10th day of a cross-border offensive that is targeting terrorists.

The warplanes struck Arab Ezza and Qundarah, which lies a short distance south of the Turkish border and west of the town of Jarablus, which was the first place seized by Turkish-backed Free Syrian Army (FSA) forces when they crossed the border on Aug. 24 into Syria.

Turkey has said it wants to clear a swathe of territory running 90 km along its border with Syria. The sites hit on Friday are roughly midway along the line being targeted by Turkey.

The FSA, backed by Turkish armor, artillery and jets, has so far cleared 32 villages of DAESH since the launch of the operation and gained an area of over 400 kilometers wide on Turkey's border, and nearly 25 kilometers of depth into Syria.

Backed by Turkey, the FSA launched an offensive against Jarablus last week with the aim of clearing DAESH from the area. The offensive, dubbed Operation Euphrates Shield, is aimed at improving security, supporting coalition forces and eliminating the terror threat along Turkey's border.

The operation is in line with Turkey's right to self-defense, borne out of international treaties and a mandate given to the country's armed forces by Parliament in 2014 and extended for another year in September 2015.

Operations by the Turkish Armed Forces (TSK) have significantly contributed to the ongoing efforts of the U.S.-backed international coalition against the Daesh terror group.