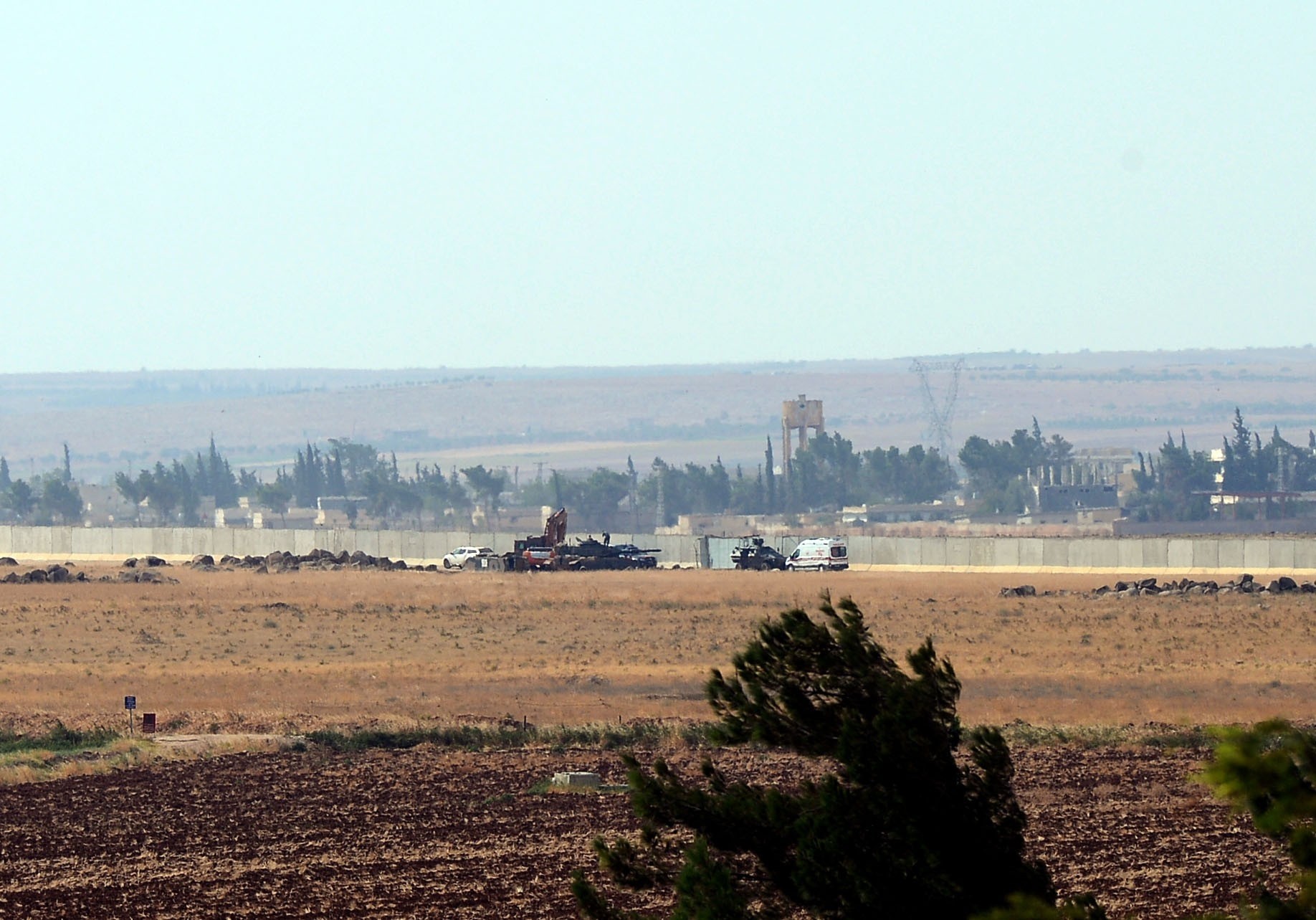 On the 12th day of Operation Euphrates Shield, which was launched on Aug. 24 to secure the Syrian border, the FSA quickly provided full border security in cooperation with the Turkish Armed Forces (TSK).

As the FSA cleared the border line, a 90-kilometer area in southern Turkey has been taken under the control of the Turkish military from DAESH. On Sunday, the FSA seized Ganime and Suveya in the western part of Jarablus, and Kadıköy (El Kadı), the last DAESH-controlled village along the border.

At the beginning of the operation, Turkish tanks and special troops crossed into Syria on Aug. 24 to back opposition fighters. The FSA seized the northern Syrian town of Jarablus in less than a day. Following the victory in Jarablus against DAESH, the FSA moved to the eastern part of northern Syria to reach al-Rai, also known as Çobanbey. 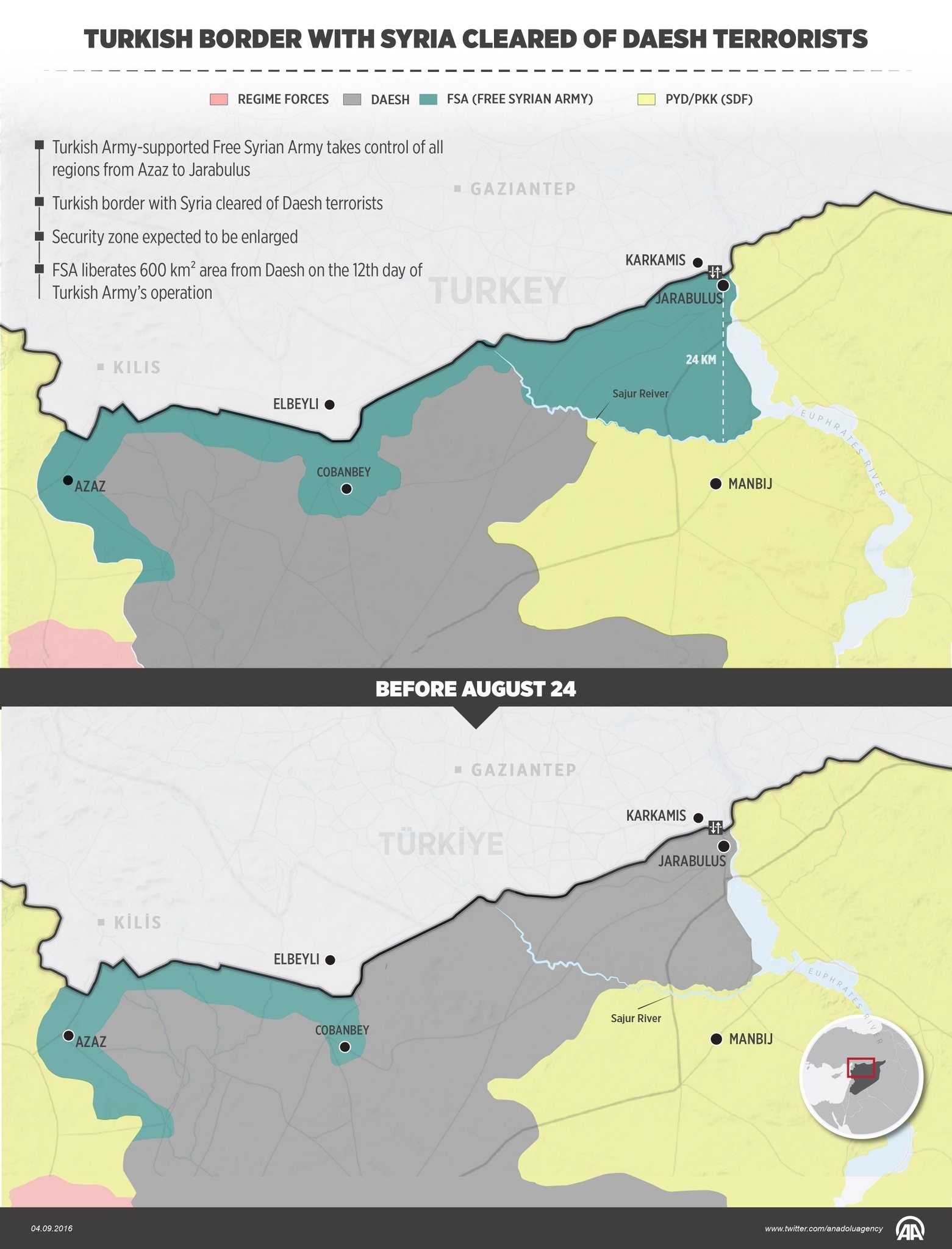 The Turkish military has removed scores of landmines and handmade explosives in Jarablus and at the Syrian side of the border since it took control of the town.

The FSA fought on two fronts. While one front marched from Jarablus, the other front was opened in al-Rai. Turkish tanks crossed into al-Rai on Sept. 3 to back the FSA fighting on the al-Rai front. In two days the FSA was able to connect the al-Rai front to the Jarablus front, giving Turkey full border security.

While Turkish tanks supported FSA fighters on the ground, Turkish howitzers and rockets also played an important role in defeating DAESH. Hundreds of howitzer shots were heard both in the border Karkamış district of Gaziantep province and Elbeyli district of Kilis province.

Now that Turkey has secured an important section of the southern border, the question is now about how deep Turkey is willing to go southwards. For the time being, the Turkey-backed FSA controls three to five kilometers southwards. However, it is argued that this will not be enough for Turkey to be free of a terror threat in the long term.

The former president of the Syrian Turkmen Assembly, Abdurrahman Mustafa, told Daily Sabah that other towns and villages held by DAESH and the PKK's Syrian offshoot PYD will be liberated as well. Stressing that it was the beginning of the operation so far, Mustafa asserted that the next targets will be DAESH-held al-Bab and YPG-held Manbij in the south.

Operation Euphrates Shield disturbed the PKK's Syrian wing, the PYD, in the beginning. When the operation started on Aug. 24, the PYD leader threatened Turkey via his official Twitter account. Salih Muslim claimed that Turkey would be defeated in Syria.

The PYD is disturbed by the cross-border operation because the terrorist group has been dreaming of an independent state along the southern border. Now that Turkey has control along the border, it seems that the PYD's plans were in vain.

Mustafa also contended that the PYD will not be able to fulfill its dreams from now on. "The YPG forces exist in the south of Jarablus as well. We know it. They will have to retreat to the east of the Euphrates," he added.

The PYD's presence in the west of the Euphrates led to a conflict between Ankara and Washington as well. While Turkey asserted that the PYD must retreat east of the Euphrates, the U.S. did not call on the PYD to do so in the beginning. As the PYD hit a Turkish tank, killing a soldier, the Turkish military retaliated.

Disturbed by the escalated tension, the U.S. urged both parties to calm down and things have slowed down in the last week.

Some on the ground claim that DAESH has retreated to al-Bab to prepare for a total war in the area. It is already known that the Turkey-backed FSA and the PYD plan to capture the strategic town of al-Bab.

Al-Bab plays a crucial role in the plans of both groups. While the PYD wants to connect its cantons from the west and the east by seizing al-Bab, the FSA and Turkey want to prevent that from happening.

Erem Şentürk, the editor-in-chief of the Turkish Diriliş Postası daily, who knows the region quite well, told Daily Sabah that the operation has just begun. "The question is about whether Turkey will actively fight in al-Bab. There will be heavy clashes in al-Bab. Turkey will have a surprise to make," Şentürk contended.