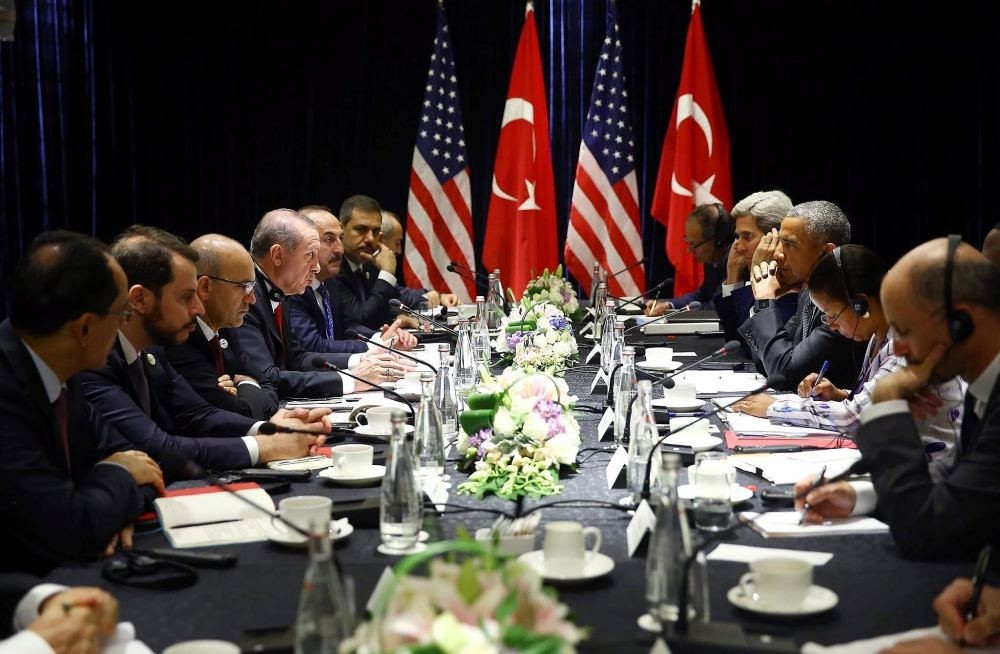 The meeting between presidents Erdoğan and Obama ahead of the G20 world leaders summit in Hangzhou, China, focused on fighting terrorism and the Syrian crisis. Despite Obama's affirming the U.S. will support Turkey in counterterrorism, Ankara seems skeptical of Washington's rhetoric

President Recep Tayyip Erdoğan met with U.S. President Barack Obama on Sunday ahead of the G20 summit in China, mainly focusing on the fight against terror, the Syrian crisis and the legal process concerning the extradition of U.S.-based Gülenist Terror Group (FETÖ) leader, Fethullah Gülen. In a press conference after the two leaders met, President Erdoğan underscored Turkey's firm stance against all terror groups, including DAESH and the PKK terrorist organization's Syrian franchise Democratic Union Party (PYD) and its armed wing People's Protection Units (YPG), and reiterated Ankara's opposition to the PYD establishing a corridor in northern Syria.

Emphasizing that Turkey is a strong NATO ally and a critical member of the coalition against DAESH, Obama said: "Our military, law enforcement and intelligence cooperation has helped push ISIL [DAESH] back from Turkey's borders. But we now need to finish the job and we discussed ways in which we can further collaborate." Obama added that the ways in which such a cooperation could be further enhanced were also discussed with President Erdoğan. Stating that "pursuing a peaceful transition in Syria, a lasting way to end the civil war there," was also touched on in the meeting with Erdoğan, Obama added: "Together we will keep working to ease the humanitarian suffering. Civilians can once again live in security and stabilize the region as a whole." Erdoğan said, "Turkey's fight against all terrorist organizations, including DAESH and the YPG will continue with determination," and urged the Obama administration to adopt a common attitude against terrorism.

"We do not want the formation of a terror corridor on our southern [border]," he said after the meeting.

Condemning the recent terror attacks in Turkey, the U.S. president said: "Against such attacks, we stand by the Turkish people and share their sorrows."

Speaking on the July 15 coup attempt, which he defined as a "scary coup attempt," and the extradition of Gülen, Obama said: "I have given my guarantee to President Erdoğan that our Justice Department and the national security teams will cooperate with the Turkish authorities." Obama also said that the U.S. is committed to investigate those behind the coup attempt and bring them to justice.

Turkey has been criticizing the U.S. administration for not dealing with the FETÖ issue genuinely and quickly enough despite Ankara's efforts to provide evidence showing that the Gülenist terror cult is behind the July 15 coup attempt.

Ankara's position toward the U.S. after the two leaders met, their first face-to-face meeting since the July 15 coup attempt, was reflected by analysts in a way that Turkey will be skeptical of the Obama administration's rhetoric on the fight against terror, particularly when it comes to the PYD/YPG in Syria and the Gülenist terror cult.

Speaking to Daily Sabah, Yaşar Hacısalihoğlu, Yeni Yüzyıl University's rector and an academic in the Department of International Relations, said that the Obama administration has so far put forward a position that does not align with Turkey's stance against the PYD terrorist organization. Hacisalihoğlu added that despite the diplomatic language by U.S. authorities showing support for Turkey, steps taken in Syria have contradicted the rhetoric. "Partnering with the PYD/YPG - which Turkey sees as a terrorist organization - against DAESH is an attempt to legitimize the PYD/YGP in the international arena. The U.S.'s partnership with the PYD/YPG in terms of logistical and military assistance helps the group establish a corridor in northern Syria, which is a direct threat to Turkey's national security," he said.

Commenting on the effectiveness of Turkey's stance against terror groups, he added: "Turkey has shown with Operation Euphrates Shield that it does not make a distinction between terror organizations that threaten its national and regional security. The presence of terrorist groups on Turkey's southern border is an attempt to spread the crisis in Syria into Turkey. As such, the fight against terrorism becomes an issue of survival for Turkey."

Washington says that Turkey should focus its efforts in Syria on DAESH and refrain from engaging in confrontation with the YPG-led Syrian Democratic Forces (SDF). Ankara has continuously criticized the U.S.'s partnership with the YPG and urged the group to immediately return to the east bank of the Euphrates River, calling on the U.S. to fulfill its commitment in this regard.

Commenting on the extradition of Gülen, Hacısalihoğlu added, "Although Turkey respects the judicial processes in the U.S. with regards to FETÖ, it is also known that the extradition issue has become a political matter against Turkey."

Erdoğan also said that Turkey's justice minister and interior minister, accompanied by other delegates, are due to visit the U.S. to discuss the extradition of Gülen.

Mazhar Bağlı, an academic at Konya Karatay University, said in an interview with Turkey's private A Haber broadcaster that Obama's statements during the press conference with President Erdoğan ahead of the G20 summit reflect his awareness of soured Turkey-U.S. relations during his term. "Obama knows that during his tenure relations between Turkey and the U.S. did not develop on a positive note. Most people in Turkey believe that the U.S. had a role in the July 15 coup attempt. And the head of the group behind the coup attempt is still in the U.S. and continues to threaten Turkey," Bağlı said.

Speaking to Daily Sabah, Talha Köse, the chair of Political Science at Istanbul Şehir University, said that the Obama administration's overall attitude toward the Syrian crisis does not seem to be changing. "The existing U.S. position with regards to foreign policy on Syria will continue until the presidential elections," he said. "However, the recent diplomatic rhetoric toward Turkey, saying they support Turkey's position against DAESH, also toward the legal process on FETÖ, such steps seems to be softening the strained relations. Will any result be achieved from this? That we will have to see," Köse said.

Meanwhile, Turkish daily Takvim columnist Ekrem Kızıltaş said in an interview with A Haber that Turkey's efforts against DAESH have been receiving a positive response from the U.S. "Although the U.S. and Turkey rhetoric on Syria seem to be conflicting, after operations [by the FSA forces backed by Turkey], the U.S. will not insist on protecting the PYD," Kızıltaş said.
RELATED TOPICS