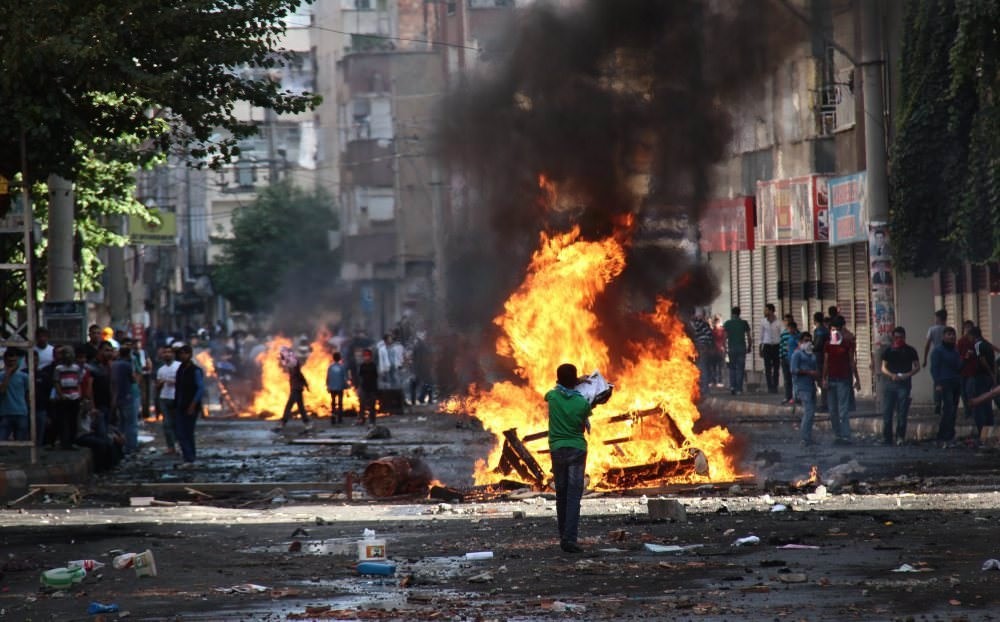 The Co-Chair of Peoples' Democratic Party (HDP) Selahattin Demirtaş has again made a call to the Kurdish people to take violent action in southeastern Turkey like he did before the Oct. 6-7 Kobani protests that claimed 50 lives. Experts criticized Demirtaş and said that politicians must use more responsible rhetoric

As the second anniversary of the Oct. 6-7 Kobani protests, which resulted in violent clashes between anti-PKK groups and PKK sympathizers after calls from Peoples' Democratic Party (HDP) members to take to the streets, approaches, HDP Co-Chair Selahattin Demirtaş once again urged people to be "ready for resistance at all times." Also, during an interview with Germany's Süddeutsche Zeitung daily on Sunday, he said the PKK was not a terrorist group but an "armed §popular movement." Commenting on Demirtaş's remarks, Kurdish expert and associate professor at Dicle University Vahap Coşkun stressed that "politicians [referring to Demirtaş] must be more responsible with their remarks; especially during such critical periods."

Speaking in the southeastern province of Diyarbakır on Sunday, Prime Minister Binali Yıldırım announced a stimulus package for the country's east and southeastern provinces, saying that Turkey will invest TL 10 billion ($3.3 billion) in the country's eastern provinces where the PKK resumed its armed campaign against the government after a cease-fire dissolved more than a year ago. Prime Minister Yıldırım continued his remarks by strongly criticizing Demirtaş, saying: "The HDP says they do not recognize the PKK as a terror organization. Rather than speaking in Germany, come and speak in Dürümlü [the scene of a devastating PKK attack on May 12 that left 16 villagers dead], come speak beside the relatives of the family that were burned alive by the PKK in Diyarbakır."

The prime minister further stressed, "There is no reconciliation. The solution is in the people's hands, there can't be reconciliation with the terrorist organization [PKK]." Assistant Prof. Coşkun said that it is no surprise that the HDP is defining the PKK as an armed popular movement, claiming that both the HDP and the PKK appeal to the same segment of society. "It is never a surprise as the HDP has never defined the PKK as a terror organization. In a way, this is normal because the PKK and the HDP are appealing to the same social ground. If I were to speak more openly, if the PKK were a political party then there would be no HDP today; thus, there would be no need for the HDP's existence," Coşkun added.

Commenting on Demirtaş's call for resistance in the eastern city of Van, Coşkun underlined that political figures must use more cautious rhetoric especially when considering what happened in Kobani on Oct. 6 and Oct. 7. He said politicians must use more responsible rhetoric to avoid having a snowball effect on political tensions. He further emphasized the importance of refraining from provocation on the streets.In addition to Coşkun's statements, Kurdish intellectual and analyst Vahdettin İnce stressed that "[Demirtaş's] remarks are a clear indication that Kurdish politicians or those who represent the Kurdish political movement did not learn their lesson; this is also a blatant statement from the depoliticized."

İnce further said that the PKK and HDP would be left high and dry by Kurdish citizens as he stressed that the HDP fails to "do politics." In regards to Demirtaş's call for resistance, İnce said, "They are calling people out to the streets for what? Not for reconciliation but rather to further agitate the situation regarding the individual in the İmrali prison [referring to imprisoned PKK leader Abdullah Öcalan]. Why are they referring the entire Kurdish issue to only one person? Kurdish people have seen this and are staying out of it." He said that the remarks made by the pro-PKK HDP co-chairman are "meaningless and unfortunate." İnce asked if the HDP wants another 40-to-50 people to be killed like in the Kobani incidents in 2014. "Kurdish citizens have stood side-by-side with Turkish citizens since July 15 and have vowed to remain united," he said.
RELATED TOPICS