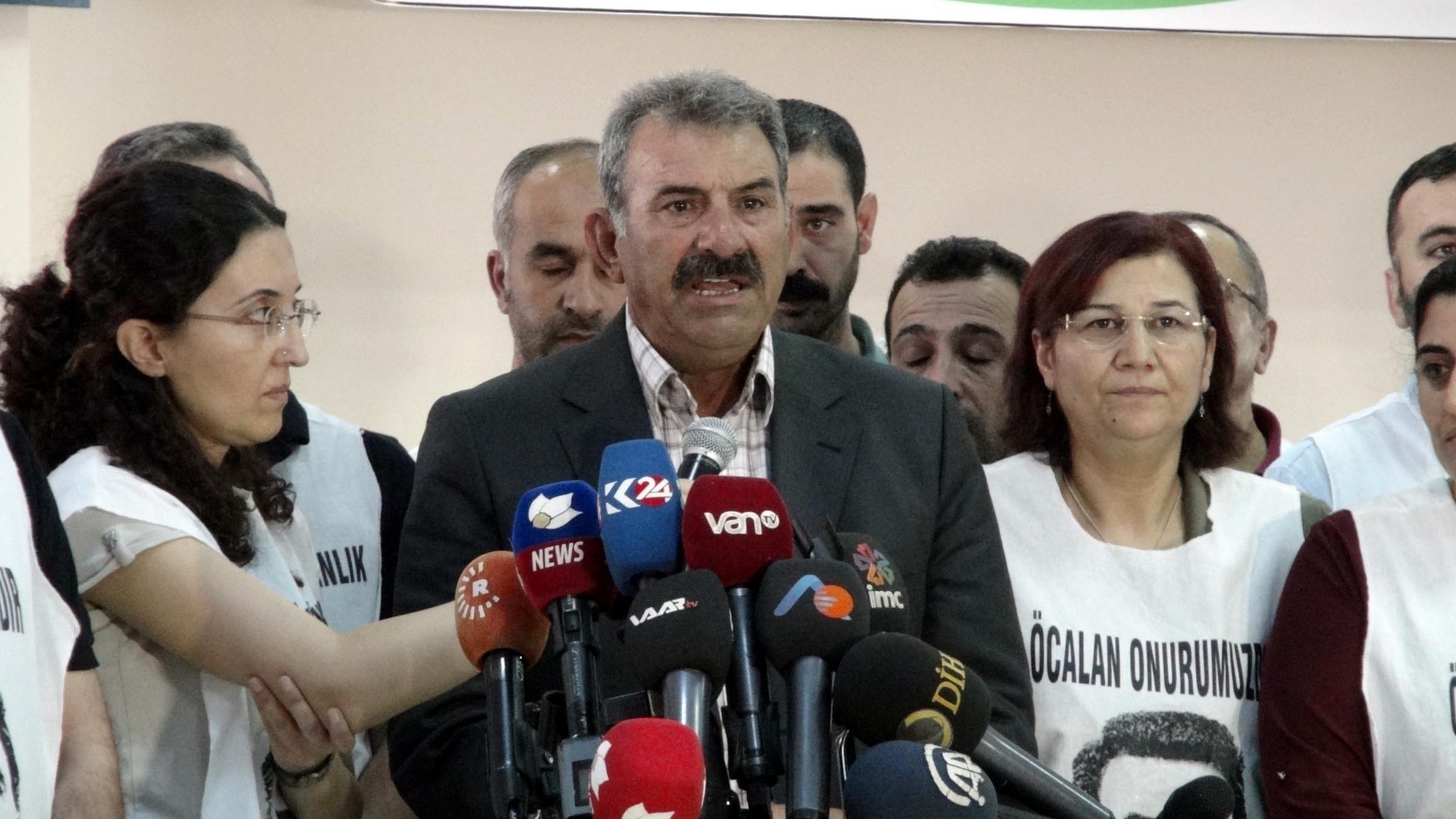 Abdullah Öcalan, the leader of the PKK terrorist group who is serving a life term on the İmralı Prison island in northwestern Turkey, demanded a return to a political solution and claimed that armed conflict could be ended within months in a meeting with his brother Mehmet Öcalan on Saturday.

Mehmet Öcalan acknowledged Öcalan's message in a press meeting in Diyarbakır on Monday, where some 50 people, including pro-PKK Peoples' Democratic Party (HDP) deputies, were carrying out a hunger strike to protest the PKK leader's isolation. Öcalan has been granted permission to see his brother during Qurban Bayram (Feast of the Sacrifice), also referred to as Eid al-Adha, for the first time in two years. The meeting lasted around one and a half hours.

Accordingly, Öcalan said that he was being isolated, however, he does not have any problems with physical conditions in prison. Mehmet Öcalan added that he is in good health.

Regarding the ongoing clashes between security forces and the PKK terrorists, which are at their fiercest since the mid-1990s, Öcalan urged for a return to the peace process. "We have projects. If the state is ready for these projects, we can realize these projects in six months. We did not terminate that process. Kurdish Question is a heavy question. It is not a 20, 40 years of a problem, but a 100, 200 years-old one," Öcalan said according to his brother.

"'This is not a war that one side can win. It's time for the bloodshed and tears to end," he said.

Upon Öcalan's message, the group on hunger strike announced they were ending their action on the eighth day. "We had only one request: to receive news from Öcalan," said, Leyla Güven, the co-chair of the umbrella political organization for the pro-PKK groups named Democratic Society Congress (DTK). "We have received the news. Therefore, we've ended the hunger strike."

More than 500 soldiers and police officers, thousands of PKK terrorists and dozens of civilians have died since July 2015, when a two-year ceasefire with the PKK - which Öcalan founded in 1978 - collapsed amid Daesh and PKK's Syrian wing PYD engaging in a fierce fight in northern Syria, with both groups trying to exert their influence through their adversaries in southeastern Turkey bordering Syria. The tipping point was the suicide bombing in southeastern border town of Suruç in July 2015, the first large scale Daesh terrorist attack in Turkish territory which killed 32 Turkish citizens at a pro-PYD rally held for the besieged Syrian town of Kobani, and PKK responded by killing two Turkish police officers. The terrorist group, using the truce for its advantage with new tactics it had applied in Syria and Iraq, brought life to a halt across entire cities and towns in southeastern Turkey by digging trenches and setting up explosive traps in urban areas. After public reaction due to heavy civilian losses, PKK later shifted its tactic to car bombings aimed at both official and civilian targets.

Öcalan was among the parties that had negotiated for truce from his prison cell, where he's been kept since 1999 on a treason conviction and a subsequent death penalty, which was transformed into aggravated life sentence after the removal of the death penalty in 2002.

In the latest violence, suspected PKK terrorists set off a car bomb on Monday near government offices in the eastern city of Van, wounding 48 people, including two police officers. The attack came a day after the mayors of 24 HDP-run municipalities, who were suspended due to PKK links, were replaced with appointed administrators.

However, a return to peace talks is highly unlikely as government officials have repeatedly said that the only condition for armed clashes to end is that PKK unilaterally laying down arms and walk away from Turkey's borders. President Tayyip Recep Erdoğan, who backed two-year peace talks with Öcalan before the fighting re-ignited, has said the campaign against the PKK - designated a terrorist group by the United States and European Union - was now Turkey's largest ever.

Öcalan's last visitors, in April, were members of the Council of Europe's Committee for the Prevention of Torture (CPT), while his last contact with the outside world was in April 2015, with parliamentarians from the HDP, who were acting as mediators in the reconciliation process. Weeks later, the HDP saw significant gains in June 7 general election, depriving the ruling Justice and Development Party (AK Party) of single-party rule for the first time in 13 years.

The CPT usually conducts visits to Turkey once every two years and visits Abdullah Öcalan, the jailed leader of the PKK who is serving a life sentence on İmralı Island, every time. Even though Öcalan's lawyers asked the CPT on August 22 to visit İmralı and inspect current conditions there, the CPT delegation will not visit the İmralı Prison this time round.

The PKK had been fighting the Turkish government for an independent state until the early 2000's. The group then shifted its goal to autonomy in predominately Kurdish inhabited regions of Turkey. So far, more than 40,000 people have died in the bloody conflict.