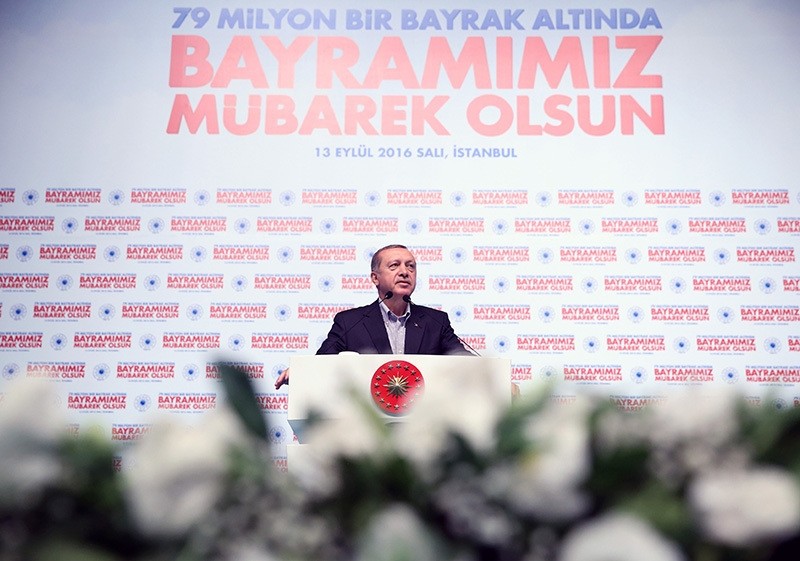 President Recep Tayyip Erdoğan defended the suspension of 28 mayors from office over their links with the PKK terror organization, saying that they exploited their position by providing assistance to terrorists.

"Some question how an elected official can get suspended," he told an audience in Istanbul. "I say they can."

"Being elected does not give you unlimited authority and powers to use against the government and people."

On Sunday, the Interior Ministry announced the replacement of the mayors with trustees, mostly in the east and southeast. Most of the suspended mayors are accused of links to the PKK terror group while four are said to have ties to the Gülenist terror cult (FETÖ) behind the July 15 attempted coup.

"If you use the machines delivered to you by the government for terrorist purposes instead of laying water or natural gas pipes or power cables, then the justice system will make you answer for it," Erdoğan said, referring to instances where municipal diggers and other machinery had been used to dig ditches and build barriers to prevent the entry of security forces into areas controlled by the PKK terrorists.

The president said those who used their powers in support of terrorism were not "really mayors in the truest sense of the word".

Addressing a Qurban Bayram event at the Haliç Congress Center, he added: "Being elected does not give anyone the right and authority to offer given resources to terrorist organizations."

Referring to Monday's car bombing in the eastern city of Van that injured 53 people, Erdoğan vowed to bring those responsible to justice.

"Sooner or later, we will drown the scum who detonated a 1,000 kilogram bomb in Van on the first day of holy Eid al-Adha in their own blood," he said.

"There is no other way around it. Nobody has a right to spoil these holy days. This scum will pay for it."

A bomb-laden vehicle exploded in the city center of Turkey's eastern Van province on Monday, injuring at least 48 people, including two in critical condition and two police officers. PKK terrorists claimed responsibility for the attack.