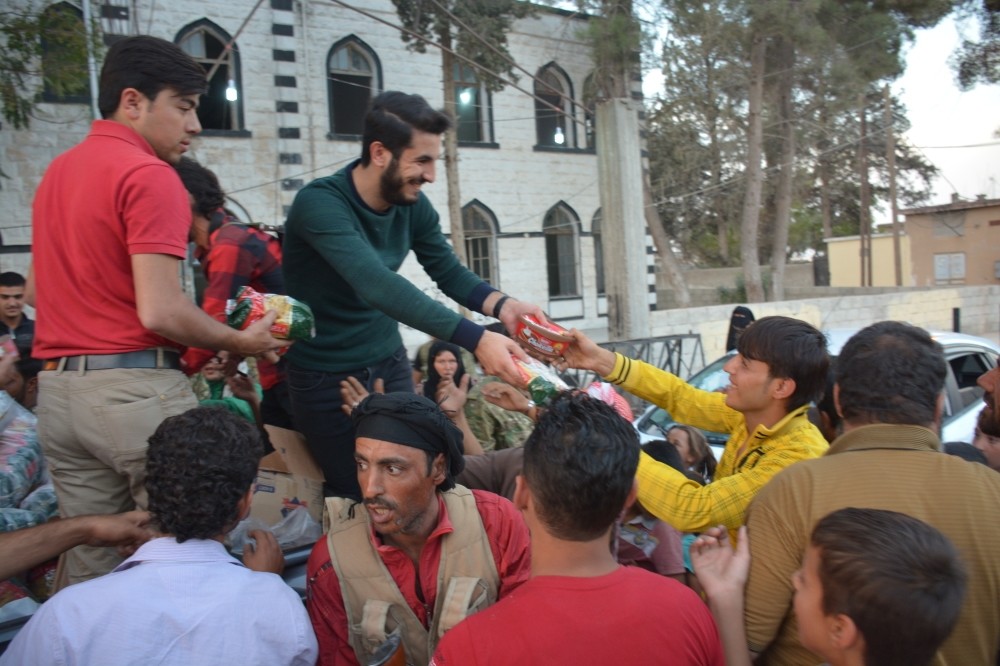 A new Turkish humanitarian aid convoy containing basic supplies reached Jarablus, the northern border town of Syria recently liberated from Daish. Locals of the town welcomed the convoy and said they are very happy to be home again

As daily life in the northern Syrian town of Jarablus returns to normal after the Turkey-backed Free Syrian Army (FSA) liberated the town from Daish terrorists in Operation Euphrates Shield, the government and non-governmental organizations (NGOs) continue to deliver humanitarian aid to the people of Jarablus. Daily Sabah traveled to the town in northern Syria to learn more about developments in the region.

On Monday the Justice and Development Party (AK Party) youth branch brought two trucks of humanitarian aid to Jarablus being the "voice of the oppressed in Syria." Tens of thousands of people fled Jarablus two to three years ago because of Daish terror and many adults had feared they too would be in danger if Daish were to seize their town. In addition, hundreds of teenagers also fled the town as they faced forceful recruitment as child soldiers. Even though tens of thousands of people used to live in the northern Syrian town, the Daish siege of the area brought a sharp decline in the population. Prior to the launching of Operation Euphrates Shield on Aug. 24, only 1,500 people still lived in Jarablus.

The operation liberated Jarablus of Daish shortly after it began, allowing many Syrians to return to their homes while numerous buildings and houses were built for the returning locals.

Monday's humanitarian aid convoy brought baby food, bread, water, pasta, olive oil, sugar, rice, chocolate and other basic needs to the residents there. In addition, a large number of beds were brought in with the trucks.

Both FSA fighters and locals welcomed the humanitarian aid convoy and expressed their gratitude to Turkey. "We are grateful for the humanitarian aid. We liberated this town with the help of Turkey. Now we are building it [Jarablus] from its ashes," a commander from the FSA, İsmail, told Daily Sabah. The commander did not want his surname to be made public due to security reasons.

In the city center, members of the AK Party youth branch distributed the humanitarian aid to locals as children in particular were seen jumping up and down for joy after they received toys.

Aisha, a woman in her mid-30s, spoke to Daily Sabah in the main square of Jarablus. "Thank God we have Turkey looking after us. We appreciate the humanitarian aid very much," Aisha said. Talking about life in Jarablus, Aisha said that they are "more than happy to be home again."

"Things have started to return to normal. We are trying to settle in. Our homeland is better than anywhere in the world," Aisha asserted.

The AK Party youth branch has been bringing humanitarian aid convoys into Jarablus since the very beginning. Speaking to Daily Sabah, head of the AK Party youth branch, Melih Ecertaş, said that their deliveries will continue in the upcoming weeks as well. "When we first brought aid convoys we said that it would not be once. Thank God, our deliveries continue," he said.

Ecertaş stressed that the AK Party youth branch will never abandon the people of Jarablus. "Turkey has always been the voice of the oppressed. As long as we exist, we will be by the side of our brothers and sisters in Jarablus," he asserted.

In addition to the humanitarian aid delivered to locals in Jarablus by the AK Party youth branch, other convoys by the Turkish Red Crescent, Gaziantep Governorate and other NGOs continue every week.

Yesterday, Operation Euphrates Shield entered its 42nd day. The Turkey-backed FSA continues to make advances both from the east and west of the Al-Rai region, also known as Çobanbey.

As the FSA marches further southwards, a fierce clash is expected in Dabiq. The town is quite important for Daish because the terrorist group believes that it is sacred.

The FSA is expected to start an offensive to seize Dabiq in the next couple of days.

The Turkish military Tuesday released a written statement regarding the latest developments in Operation Euphrates Shield. The military said that 80 Daish targets were hit with 199 howitzer rounds and 20 rockets, killing 12 Daish terrorists.

Since the start of Operation Euphrates Shield, the TSK has hit around 1,800 Daish targets, the statement read. Meanwhile, 10 opposition fighters were wounded in clashes as well.
RELATED TOPICS