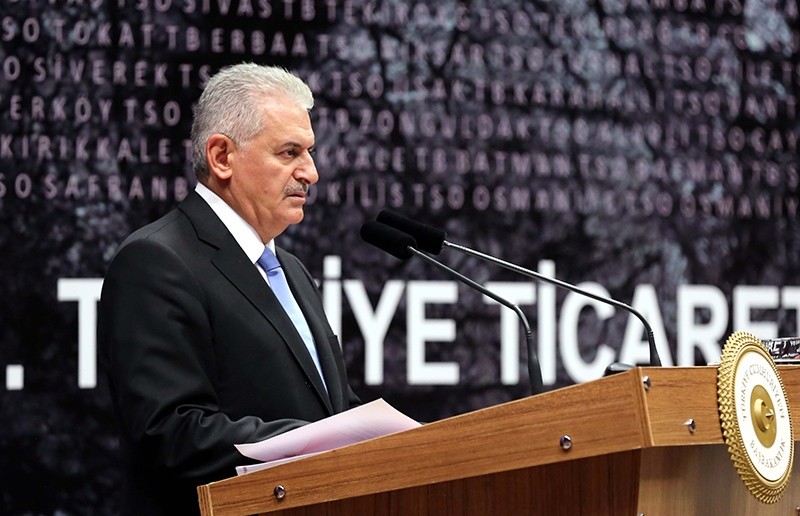 While the Iraqi government’s and Iran-backed Shiite militant groups’ hostile acts toward Turkey have escalated, PM Yıldırım said that the Turkish military presence in Iraq will continue in order to maintain fight against Daish

Turkey's military presence in Iraq's Bashiqa camp will continue to ensure the demographics of the region are not altered and resume fighting against Daish, Prime Minister Binali Yıldırım said on Thursday, as Iraq demanded the United Nations Security Council discuss the Turkish presence in Bashiqa.

Yıldırım spoke at a trade and industry meeting at the headquarters of the Turkish Union of Chambers and Commodity Exchanges (TOBB) and said that the Iraqi government is pushing boundaries by speaking ill of Turkey, which has always existed in the region, while it turns a blind eye to all other countries that have no relevance in the region.

On Tuesday, the Iraqi parliament, in a written statement, said that it did not accept Turkey's military presence in Bashiqa.

Yesterday, Iraq has formally called on the U.N. to convene an urgent meeting of the Security Council to discuss the Turkish military presence in Camp Bashiqa in Iraq's northern Nineveh province, according to a Foreign Ministry statement.

"Iraq's reaction to Turkey's military presence at the Bashiqa army base north of Mosul is 'incomprehensible'," the prime minister said and added that Turkey aims to ensure that more blood is not spilled in the region.

"Iraq is wasting its time by fixating on Turkey's presence in Bashiqa, when there are troops from 63 different countries present to fight Daish and other terrorist organizations,'' Yıldırım said.

"Iraq is reflecting the sentiments of Iran and U.S., so we should examine the interest of these two Powers in order to understand Iraqis and Shiite militant groups aggression towards Turkey," said Özcan Tikit, a columnist for HaberTürk daily, to Daily Sabah.

He said that after the Mosul operation, the dynamics of Iraq will be re-established and all the actors are trying to strengthen its hand for this process. "Iran has been trying to confine Turkey's sphere of influence in the region as much as possible and is attempting to create a government loyal to Tehran for the post-Daish period, just like it did in Baghdad. On the other hand, the U.S. seems to be acting together with Iran, their implicit ally in the region, as its regional interest started to clash with Turkey, especially after the Syrian crisis began," Tikit said. He also added that as long as Turkey receives the Kurdistan Regional Government's (KRG) support it won't be easy to knock Turkey out of re-establishment period for post-Daish era in the Mosul.

The Iraqi Shiite militia group Hashd al-Shaabi threatened to attack Turkish troops if Turkey does not pull its forces out of Iraq.

Yesterday, Yousif al-Kilabi, spokesperson of the group, defined Turkish forces situated in Bashiqa as "occupiers" and said "during the fight against Daish in Mosul we will not only fight the group (Daish), but also the Turkish troops, if they do not retreat from Iraqi land."

"We should define the aggression not as an Iraqi attitude, it totally reflects the Iranian position and interests towards the region," said Taha Kılınç, an analyst on Middle East affairs. He said that Turkey should not take the Iraqi government comments seriously; however, the country should create a strategy against the Iranian agenda in the region. "Even though Iranian politicians often visit Turkey and are considered an ally, they continue to implement their own agenda," Kılınç said.

Meanwhile, on Sunday, Qassim al-Tai, a Shiite cleric issued a fatwa (order) that ordered the Iraqis fight against the Turkish troops, by claiming it is a "religious and moral duty." He said that Turkish companies and goods should also be boycotted.

KRG Spokesman Safin Dizayi said that the Bashiqa camp, which have created a diplomatic spat between Baghdad and Ankara due to presence of Turkish troops there, were founded with the knowledge and permission of the Iraqi government and Defense Ministry.

The KRG facilitated the establishment of the camps, Dizayi said, adding that Turkish experts had started training Mosul police and volunteer forces. The statement noted that these camps had been visited by the Iraqi defense minister.

Meanwhile, Atheel al- Nujaifi, former Nineveh governor and now believed to have formed a 4,500-strong force that is expected to take part in the operation to liberate Mosul, said yesterday to Reuters that his men, who were trained by 200 Turkish military advisors, are more likely to succeed in stabilizing Mosul "because they are locals who can win over the population."

Nujaifi praised cooperation with the Kurds, but criticized the Iranian-backed Shi'ite militias underscoring sensitivities ahead of the Mosul campaign. "Kurds are partners on the ground. We have no problems with them. But in terms of the Shiite militias they are an alien," he said.

Arafat Karam, a Kurdish deputy in Baghdad also said yesterday in the Iraqi parliament that Sunnis and Shiites must denounce other foreign forces that are meddling in Iraq's political affairs.

"Why do they not talk about other parties, for example, Iran. They have even come to Baghdad. Why do they only talk about Turkey?" Karam said.

Turkish diplomatic sources have expressed five conditions over the upcoming Mosul operation to the U.S. authorities during a meeting in Ankara on Wednesday. The reservations are:

-Supporting the homecoming of all Sunni and Shiite Turkmen people to Tal Afar after the operation and prevent Shiite militant groups settling in the district.

- Preventing Iraqi Shiite militia groups who could form a new land connection between Iraq, Iran and Syria via Tal Afar in order to ease military and other logistical transfers to Bashar Assad regime.

- Ruling out a permanent stay of the PKK terrorists who entered Syria by claiming it would fight against Daish, but instead it settled in the Sinjar district.

- Conducting simultaneous operations against Daish in the Syrian city of Raqqa and the Iraqi city of Mosul, which could deal a big blow to the terrorist group.

- Including local fighters of Mosul to the operation, which trained in the Bashiqa region since early 2015, with the request of Iraq's regional government and prevent fanaticism of Shiite militants in the region.