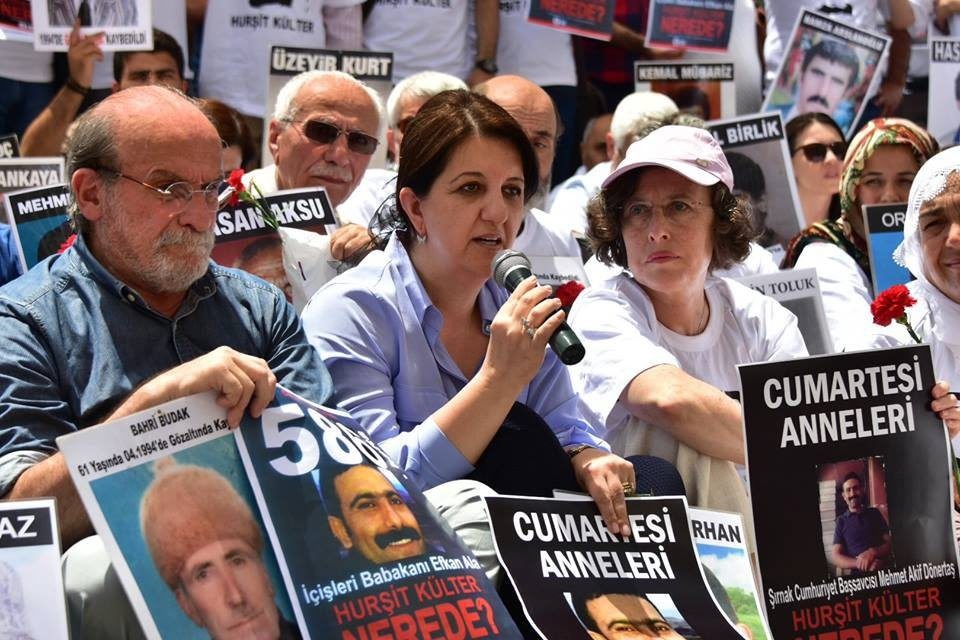 Deputies from Peoplesu2019 Democratic Party (HDP)carry Ku00fclteru2019s picture by claiming the pro-PKK figure went missing on May 27 under police survelliance. Ku00fclter has surfaced at a PKK camp in Kirkuk, Northern Iraq.
by Ali Ünal Oct 11, 2016 12:00 am

After a pro-PKK politician, who had been assumed missing since May, was found in a PKK camp in Northern Iraq, opposition parties and the ruling party told Daily Sabah that the pro-PKK HDP exploited the sensitivity of the Turkish public on the issue

Even though questions about the fate of Hurşit Külter, a pro-PKK figure who went missing on May 27 only to resurface in Iraq last week, seem to have been solved, the ramifications of his cat-and-mouse game continue to plague Turkish politics. Prominent parliamentarians from three different political parties spoke to Daily Sabah about questions surrounding the issue, stressing that Külter and the Peoples' Democratic Party (HDP) manipulated the Turkish community and took advantage of public sensitivity about kidnappings in a striking example of the HDP's level of incompetence on a political level and its failure to represent the Kurdish community.

After months of questions surrounding Külter's "disappearance" and dozens of demonstrations being held, the Şırnak provincial member of the pro-PKK Democratic Regions' Party (DBP) Hurşit Külter has surfaced at a PKK camp in Kirkuk, Northern Iraq. Külter even held a press conference on Oct. 7 and assured members of the media that he was alive. However, the political ramifications of the fabricated event, aimed at dealing a blow to the government, will not disappear as quickly as Külter supposedly did. The political stunt gave the impression that Turkish security forces deny fundamental human rights, hampering their efforts as they continue to fight the PKK terror organization in southeastern Turkey. HDP Co-Chair Selahattin Demirtaş was one of those who accused Turkey of being responsible for Külter's disappearance, going so far as to bring the issue to the fore of a weekly parliamentary group meeting. Showing a photo of Külter to his fellow parliamentarians, Demirtaş told his party that Turkey is sending a grim message to Kurdish youth that their demise could be like that of Külter, urging young people to amp up their resistance against the Turkish state in the southeast.

Commenting on this issue, main opposition Republican People's Party (CHP) deputy Utku Çakırözer expressed his happiness that Külter is still alive while criticizing him for manipulating the Turkish people's sensitivity about missing persons. "Turkey is a country that has witnessed numerous unidentified murders and missing persons cases. Hence, the community is very sensitive about this issue," Çakırözer said. "Therefore, no one should manipulate this sensitivity. These kinds of thoughtless actions offend and hurt the real victims of this problem," he added.

However, MHP deputy Oktay Vural believes that Külter's disappearance was a well-planned provocation that aimed to harm the Turkish state, saying: "I believe the HDP administration knew about Külter's location from the beginning. It was a cheap, dramatic show. The HDP tried to use this incident as an excuse to provoke the people of southeastern Turkey," Vural said. "This incident reveals that the HDP is incapable of participating in politics. The party no longer represents the community and has become a party that gathers support for terrorism and uses cheap stunts to garner public support," he added.

AK Party Group Deputy Chairman Bülent Turan described the Külter incident as a well-planned operation that altered perception, asserting that "The HDP tried to disseminate the perception that people go missing during the detention period, trying to steer the country back to the 1990s. The Turkish people and even the international community were duped by this smoke and mirrors campaign; even U.S. State Department spokesman John Kirby who made a statement about Külter's fate," Turan said.

Turan also drew attention to those AK Party politicians who have been killed by the PKK in recent months, saying that even though the Külter incident turned out to be entirely fabricated, the assassination of AK Party politicians is a cold, hard truth, pointing out that "In recent months the AK Party's Beytüşşebap Youth Branch head Naci Adıyaman in Şırnak, deputy candidate Ahmet Budak in Hakkari and Özalp district head in Van province have all been assassinated by the PKK. The HDP has not raised its voice against these heinous murders and has remained silent. By doing so, the HDP is destroying its own legitimacy and the lives of Kurdish youths," Turan concluded.
RELATED TOPICS