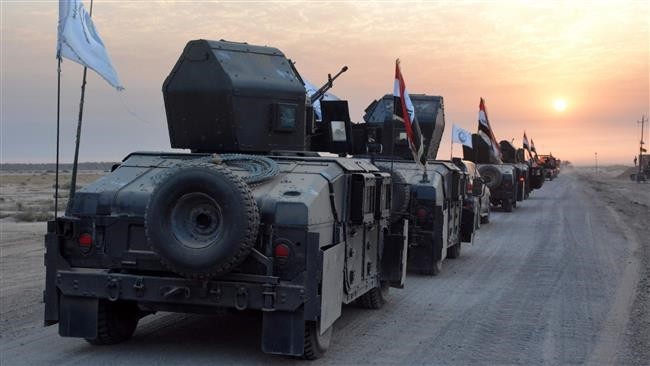 Ankara has expressed its determination in the fight against terror groups in both Syria and Iraq through supporting the Mosul operation in Iraq and continuing the Operation Euphrates Shield to eradicate Daish in Syria. Turkish leaders also underlined that local forces must be an essential part of the Mosul operation to maintain regional stability afterward

''The Turkish army will do what is necessary in Mosul,'' Turkish President Recep Tayyip Erdoğan said on Tuesday in Istanbul, while ignoring al-Abadi's rejection and added that, ''Turkish Armed Forces (TSK) will not take direction from the Iraqi prime minister.'' Likewise Turkish Prime Minister Binali Yıldırım speaking at the Justice and Development Party (AK Party) parliamentary group meeting in Ankara on Tuesday reiterated Turkey's support to the Mosul operation and warned that the Mosul operation should only aim to liberate the city from Daish, rather than trying to change demographic structure of the city. ''Mosul belongs to the people of Mosul. Do not let outsiders in and ruin the original demographic fabric of the city, which might lead to a new civil war.'' Yıldırım said. ''We are warning once again to prevent any sectarian war and Muslim bloodshed. This is the main desire and this is the main reason for our presence in Bashiqa,'' he added.Turkey has readied its plans to support the Mosul operation, and the dimensions of Turkey's contribution in the operations were worked through by Turkish and U.S. officials. Accordingly, Turkey has offered the support of the Turkish Air Forces along with intelligence cooperation including aerial reconnaissance and logistic support via the İncirlik air base. The other Turkish air bases in Malatya, Batman and Diyarbakır will also be ready to provide humanitarian assistance and emergency landing services. In addition, Turkish artillery forces stationed at Bashiqa military camp will also be ready to support the operation. However, sources also indicated, in line with Turkey's policies, involvement of Turkish ground forces in the operation is not considered as an option.

As expressed by the Turkish leaders, the country believes that "Mosul belongs to the people who are from Mosul," and Turkey's perfective aftermath of the operation is just as important as the operation itself to prevent sectarian and ethnic conflicts. Thus, Turkey stresses the importance of the participation of local forces to the operation, rather than Shiite militias, and excludes the idea of the PKK's participation to the operation.

Since March 2015 Turkish military experts have trained more than 3,000 KRG peshmerga units and Iraqi army members to prepare them for the Mosul operation. Thus sources indicated that Turkey desires active participation of the soldiers that have received training from the Turkish forces in the Bashika camp to the operation. In addition, Former Nineveh province governor, Atheel al-Nujaifi told Daily Sabah on Sunday in Irbil that Sunni group Hashdi Vatani, which trained at the Basqika camp, will participate to the operation. ''Currently there is no Shiite militia inside the Iraqi army. According to our main plan, Iraqi forces and Hashdi Vatani will participate to the operation and will enter the city when the operation is succeeded. Shiite militias definitely will not enter the city,'' he said. Meanwhile Felah Mustafa, Head of Foreign Relations Department of the KRG told Daily Sabah that Kurdish peshmerga forces will participate to the operation. ''The operation cannot be successful if the peshmerga will not be part of it. According to our plan our peshmerga forces will support the coalition forces until the borders of Mosul, but we will not enter into the city,'' Mustafa said while stressing maintaining the ethnic and religious demographic of Mosul to have stability even after the operation.

Meanwhile Turkey also expressed its reservation about the Mosul operation to the U.S officials Antony Blinken, U.S. deputy secretary of state, and Brett McGurk, the U.S. State Department's special presidential envoy for the global coalition to counter Daish, during their meeting with Turkish officials last week. Accordingly, Turkey warned U.S. authorities that the Shiite militant groups could trigger the sectarian conflict in Tal Afar if the Shiite militant groups would invade the region after the operation and the Turkmens would be harmed the most by the presence of Shiite militants in their district. Turkey also expressed its concerns about the risk of PKK occupation in Turkmen-populated areas such as the city of Tal Afar. Turkey also highlighted the importance of launching simultaneous operations against Daish in the Syrian city of Raqqa and the Iraqi city of Mosul, which could deal a big blow to the terrorist group. Ankara also warned the U.S. government that the Mosul operation "should not harm" Turkey's recently launched Operation Euphrates Shield, sources stated.
Last Update: Oct 12, 2016 1:18 am
RELATED TOPICS