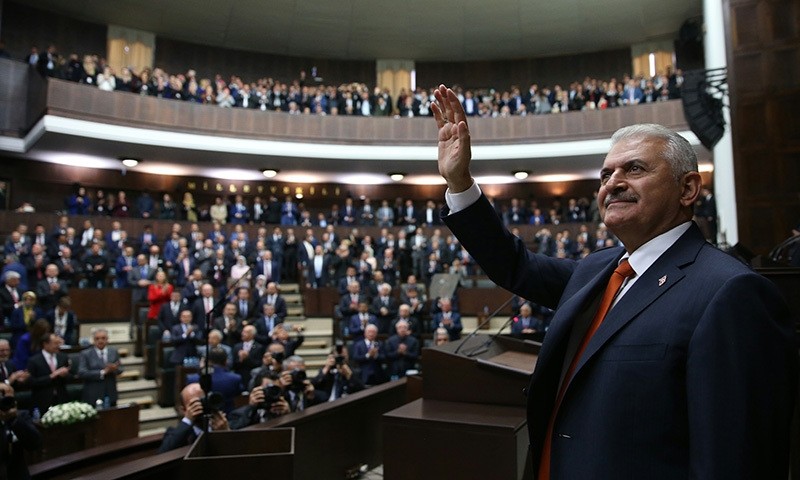 The ongoing operation to liberate Mosul from Daesh terrorists, and the new constitution were the key points in Prime Minister Binali Yıldırım's address to the Justice and Development Party (AK Party) parliamentary group on Tuesday.

Yıldırım warned that Turkey will retaliate in kind if the situation in Mosul contradicts Turkey's interests.

Ankara has been locked in a row with Baghdad about the presence of its troops at the Bashiqa camp in northern Iraq and over who should take part in the U.S.-backed assault on Mosul.

Turkey has trained up to 3,000 forces taking part but is concerned the operation could stoke ethnic and sectarian tensions if Shiite militias and PKK terrorists are used in the operation.

The new constitution proposal, which would include the AK Party's plan for a presidential system, will be brought shortly to Parliament, Yıldırım said, speaking shortly after the Nationalist Movement Party (MHP) leader Devlet Bahçeli reiterated his position on solving the debate with a referendum during his parliamentary group speech.

The prime minister said that Bahçeli is right in his suggestion that the issue should be brought to the people quickly to end the discussion.

Yıldırım said that the government is ready to meet with the main opposition Republican People's Party (CHP).

Yıldırım reiterated AK Party's position that the government will seek a referendum on presidential system even if there is a strong enough majority achieved in Parliament.

Yıldırım also slammed the 9/11 bill adopted by the U.S. Congress allowing the victims of the terror attack to sue Saudi Arabia.

"The bill is a cover for the U.S. to seize Saudi funds, this has nothing to do with international law," Yıldırım said.

At the end of his talk, Yıldırım added that there is mutual understanding between coalition forces over Turkey's participation in Mosul operation against Daesh.