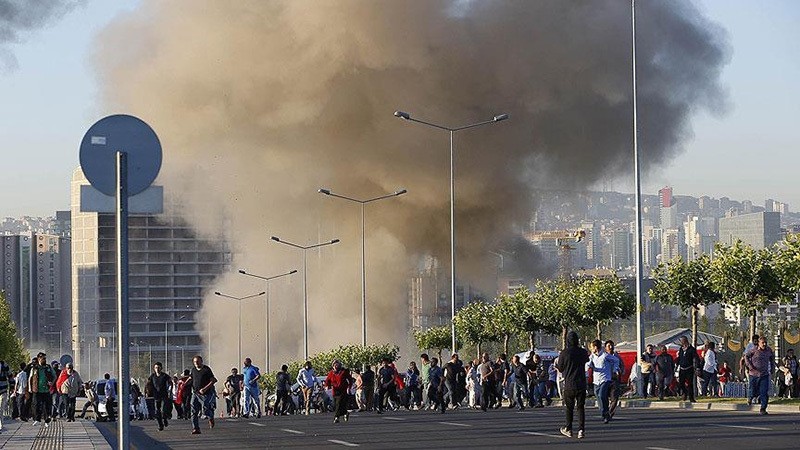 The pilot who bombed the presidential complex in Ankara on the night of July 15 failed coup attempt has admitted in his testimony that he knew his group, the Gülenist terror cult (FETÖ) was behind the coup and that he hit the complex on purpose. His testimony reveals a number of details regarding the direct involvement of FETÖ in the failed coup attempt.

According to reports, Lieutenant Müslim Macit was interrogated on September 30 and said that he received orders from civilians affiliated with FETÖ.

He admitted that Gülenist Lt. Ahmet Tosun was ordering jets to strike the parliament, to fly at low altitudes on Ankara's Kızılay Square, and to hit TürkSat headquarters.

He said that he fired on the presidential complex, and dropped a bomb close to the mosque inside the complex.

"Later on, jets taking off from Erzurum came to stop me so I went back to the base. In the meantime, I knew that we (FETÖ) were carrying out a coup attempt" said the pilot, and added that he intentionally hit the targets.

On July 15, a small military junta linked to FETÖ attempted to topple the democratically elected government in Turkey and bring martial law into effect. The attempt was prevented by the military loyal to the government along with police units and millions of people in favor of democracy. A total of 264 people, mostly civilians, were killed and over 1,500 people were injured. Opposition parties have united in condemnation of the coup attempt, denouncing it in the harshest terms and underscoring their determination to preserve democracy and rule of law in Turkey.