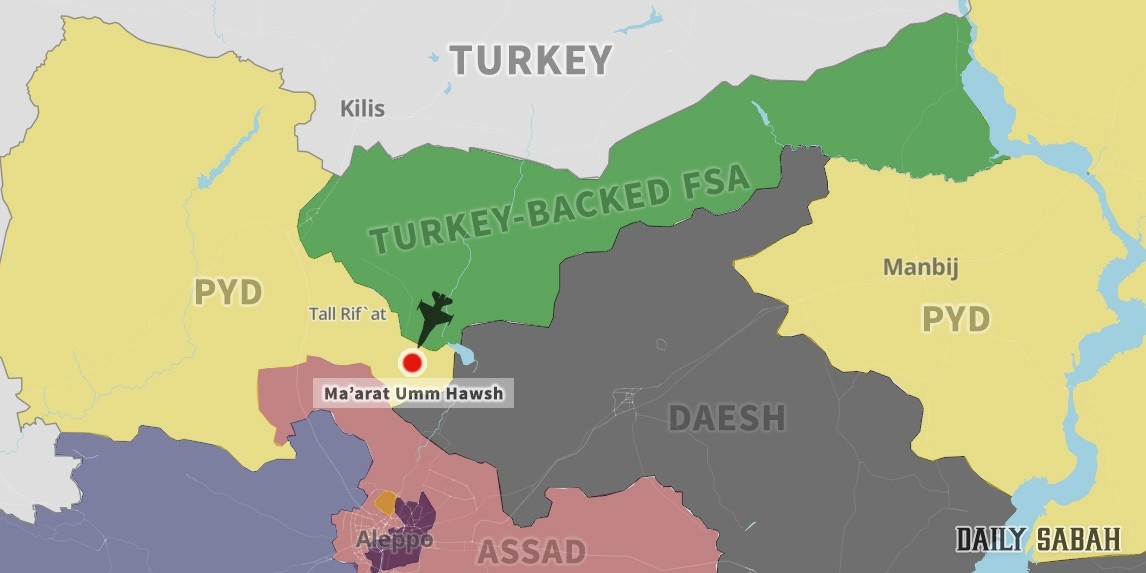 In a statement, the Turkish General Staff said between 160 and 200 members of the terror group were killed in airstrikes carried out as part of Operation Euphrates Shield.

The statement gave no precise location for the attacks but the PKK/PYD has recently been attempting to take al-Bab, a city around 37 kilometers northeast of Aleppo, in a bid to unite two areas it controls - Afrin and Manbij.

According to a local source, who spoke on condition of anonymity, this brought the group into conflict with the Turkey-backed Free Syrian Army (FSA) on Tuesday and Wednesday.

As part of Operation Euphrates Shield, which was launched in August to rid the Syrian border area of terrorists, Turkey has been supporting the FSA against Daesh in northern Syria. The campaign has seen both Daesh and the PKK/PYD targeted by the FSA and Turkish tanks, artillery and aircraft.

In an earlier statement issued Thursday, the military said another 11 stationary targets and seven moving targets were destroyed in raids carried out between 9:11 p.m. and 11:59 p.m. local time Wednesday. The People's Protection Units (YPG) sent off five mortar shells that hit near a military outpost in the border province of Hatay on Thursday.

Turkey considers the YPG a Syrian offshoot of the PKK terror organization, which is also listed as a terror group by the United States and the EU. The PKK resumed its decades-old armed campaign in July last year. Since then, PKK terrorist attacks have killed more than 700 security personnel and also claimed the lives of many civilians, including women and children, while nearly 8,000 PKK terrorists were killed in army operations.

The new gains by the FSA has made it difficult for the PYD to protect its controlled areas in northeastern Syria (near the Iraq border) and in northwestern areas (near Turkey). The PYD's failure to capture al-Bab will mean that it will not be able to connect Manbij city on the west bank of the Euphrates River with Afrin near the Turkish border. The group has been aiming to establish a canton by connecting the two areas, and ultimately declare an autonomous region.

On Wednesday, President Recep Tayyip Erdoğan highlighted that Ankara's new counterterrorism approach will tackle the problem at its source rather than dealing with the consequences of the terror threat.

Ankara has firmly stated that the YPG presence in northern Syria consists of a national security threat for Turkey's borders as it is linked to the PKK terror group. Turkey has long argued that there are arms and logistical equipment transferred from the YPG to the PKK. The United States sees the YPG as its main partner against Daesh in Syria, while Turkey argues that both are terror groups and Washington should not pick-and-choose when it comes to terrorist groups. Meanwhile, Ankara also argues that the arms support to the PYD by the U.S. is eventually transferred into the hands of the PKK, as well as the Daesh terror group, and they are used against Turkey.

On Oct. 17, President Erdoğan also said that a "terror-free zone" will be established for Syrian refugees in the areas cleared of the Daesh terror group in northern Syria. "Manbij will be cleansed of PYD [Democratic Union Party] elements. We have no tolerance on this issue and we expressed our position to our partners in the coalition. Our goal is to form a 5,000-square-kilometer terror-free zone," Erdoğan said, also underscoring FSA's success in clearing Daesh from Jarablus and Dabiq and that the Turkey-backed group will also move toward Raqqa and Manbij to clear the areas of PYD, YPG and Daesh terrorists. The recapturing of Dabiq from Daesh was a strong blow to the terror group, which is of symbolic importance for Daesh, as the group believes it will be the site of an end-times battle with non-Muslims.