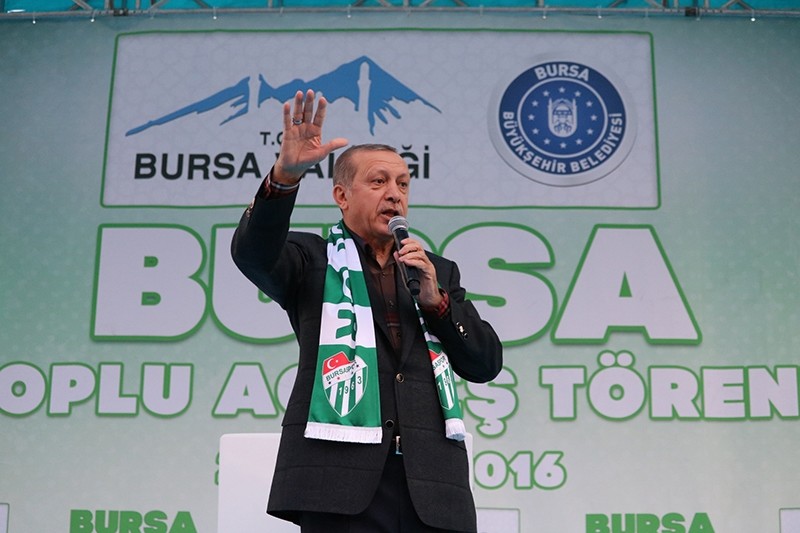 Erdou011fan speaking at an inauguration ceremony for an education facility in the northwestern province of Bursa. (AA Photo)
by Compiled from Wire Services Oct 22, 2016 12:00 am

President Recep Tayyip Erdoğan reiterated his call for a "terror-free zone" in the northern part of war-torn Syria on Saturday.

"Now, 'do not go to Al-Bab' they say. We have to; we will go. Why? Because we need to prepare a terror-free zone there," Erdoğan said, referring to Turkey's ongoing military operation called Euphrates Shield.

To ensure the establishment of a buffer zone on the Turkish-Syrian border to protect Turkey from Daesh shelling and the terrorism threat, capturing al-Bab is as important for the FSA as it is for Turkey.

Turkey has recently reiterated that the aim of Operation Euphrates Shield is securing a 5,000-square-kilometer area in Syria free of the Daesh threat.

The president's comments came during an inauguration ceremony for an education facility in the northwestern province of Bursa.

"If the coalition forces are ready to move together, we will do what is necessary against Daesh in Raqqa too. But not together with the PYD or YPG."

Erdoğan said Turkey would "not take terror organizations along with us".

Carter thanked Erdoğan for "Turkey's resolve in the fight against terrorism and Turkey's critical support for the counter-ISIL campaign in Syria and Iraq," the Pentagon said in a statement which used an alternative acronym for Daesh.