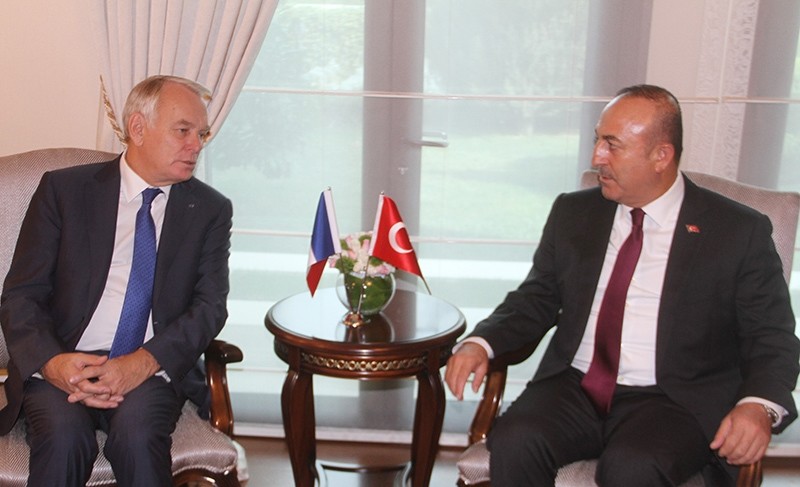 As part of official visits by a number of Turkey's Western allies following the failed July 15 coup attempt, French Foreign Minister Jean-Marc Ayrault arrived in Ankara on Monday making his first stop at Parliament, which was heavily bombarded by the Gülenist Terror Group (FETÖ) fighter jet pilots. Following his visit, the French foreign minister arrived at the official residence of his Turkish counterpart Mevlüt Çavuşoğlu where a joint press conference was held and Çavuşoğlu assured the foreign minister that Turkey will engage in combat more actively against the PKK terrorist organization in Northern Iraq, emphasizing that Mount Sinjar should not be allowed to become a "second Qandil," referring to the Qandil Mountains, which are the headquarters of the PKK.

The foreign minister is one of several diplomats who have visited Turkey and the French foreign minister, like Turkey's regional allies, once more reiterated his support for the country, expressing solidarity with Turkey and its citizens after the bloody July 15 coup attempt by FETÖ.

Adding to Ayrault's remarks, Foreign Minister Çavuşoğlu said, "there is no difference between the state of emergency in Turkey and France, as the declarations in these respective countries have been made with the same goal and under a similar scope that focuses on protecting these countries from terrorist groups. FETÖ-affiliated terrorists in Turkey are liable to the justice system just like those terrorists who targeted France."

Commenting on Prime Minister Binali Yıldırım's recent remarks on Sunday regarding information on the latest involvement of Turkish tanks in Bashiqa in support of Peshmerga forces, Yıldırım said: "Turkish tanks along with the Peshmerga forces have moved forward toward the Bashiqa camp to eliminate terrorists at the request of the peshmergas." Foreign Minister Çavuşoğlu added to these remarks saying, "We are participating in the ongoing Mosul operation in a multifaceted way. The peshmerga forces we have trained in Northern Iraq are actively participating in the Mosul operation. Similarly, the local forces that we trained in the Bashiqa camp, which we call the Nineveh forces, are also actively involved in the Mosul operation against Daesh." Çavuşoğlu said that Turkish artillery fire and mortars has killed 17 Daesh terrorists since the Mosul operation began in Iraq, adding that more than 700 Daesh terrorists were killed before the operation began. While noting that there are four Turkish F-16 jets in the U.S.-led coalition, the Turkish foreign minister said the details of their participation are to be discussed among Turkish officials and other coalition members.

Despite the Iraqi prime minister's intrusive and controversial statements against Turkish involvement in the Mosul operation and Turkey's military presence in Bashiqa, Çavuşoğlu reaffirmed that "territorial integrity, security and stability is as important as our own security." He said that Turkey will exercise its rights which are ensured by international law and will not let terrorists expand, while stressing that Turkey will engage in more active combat against the PKK terrorist network in Northern Iraq and will not allow Mount Sinjar to become a "second Qandil." Regarding the issue of refugees, Çavuşoğlu drew attention to the fact that while most of the world speaks only about Syrian refugees, there are over 300,000 Iraqi refugees in Turkey who fled the conflict in their country. "There are 40,000 displaced people in the refugee camp we established in Iraq and we deliver humanitarian aid there on a daily basis," he said.