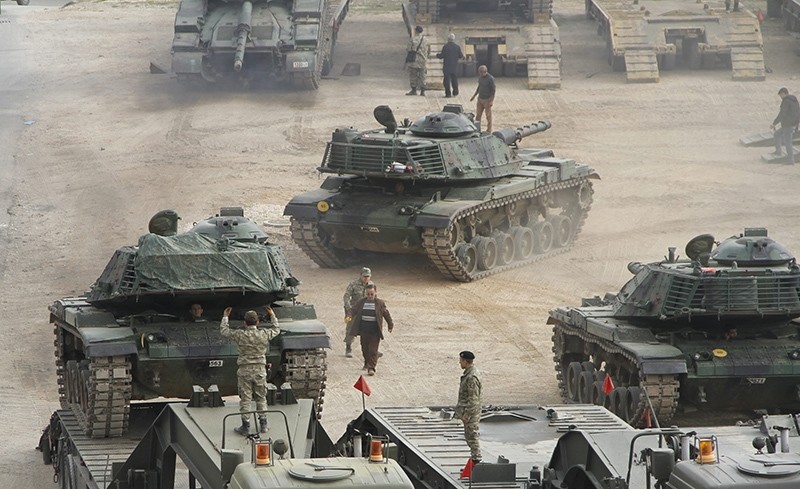 Turkey has asked the United States to keep the PKK's Syrian wing People's Protection Units (YPG) from entering the Daesh stronghold of Raqqa, adding it was ready to provide military support to take over the Syrian town.

Before his departure from the two-day NATO Defense Ministers Meeting, Defense Minister Fikri Işık said yesterday Ankara demands that the U.S. change its stance on the inclusion of the YPG in the Raqqa operation. His comments came after the top U.S. military commander said on Wednesday YPG terrorists would be included as a part of the force to isolate Raqqa.

Işık said Turkey has the necessary skills to provide an alternative to the YPG and that the necessary force could be formed under the scope of the Turkey-backed Free Syrian Army (FSA), which has been successfully carrying out Operation Euphrates Shield in Syria and has cleared Turkey's border from Daesh terrorists. "We have stressed that a wrong strategy would cause troubles for Raqqa too," he said.

The U.S. previously assured Turkey that the YPG dominated Syrian Democratic Forces (SDF) would only use its Arab forces in capturing Manbij from Daesh extremists; however, the YPG led the offensive and this was interpreted as the town falling from "one terrorist organization to another." Washington failing to keep its promises triggered huge anger and frustration from its NATO ally Turkey.

Minister Işık also said the U.S. says it stands behind its promise to withdraw the YPG from Manbij. "From now on, we will not look at their rhetoric but actions. I hope they immediately act upon their promises or else Turkey would not hesitate to take the necessary actions," he said.

Turkey strongly opposes any PKK affiliated organization in the region. President Recep Tayyip Erdoğan also said yesterday Turkey's military operation in northern Syria will target Manbij and Raqqa after the town of al-Bab. The president has persistently called on the YPG to withdraw to the east of the Euphrates River. Erdoğan said the goal of the Turkey-backed opposition was to recapture al-Bab in northern Syria from Daesh terrorists and then go forward to Manbij. So far, the Turkish army has cleared 1,265 square kilometers (488 square miles) of territory from terrorists, including the Daesh stronghold Dabiq, which has symbolic importance. The Turkish border with Syria has been cleared of Daesh elements as part of the military intervention.

Defense ministers from Turkey, the U.S. and France held a trilateral meeting on the first day of the ministerial meeting on Wednesday, discussing the recent regional developments and the fight against Daesh. Işık said Turkey is pleased to be included in the Mosul operation. "Our fighter jets are ready. There is no obstacle for the Turkish air force to join the Mosul operation," he said and added the Shiite militia group Hashd al-Shaabi should not be included in any phase of the operation in Mosul.