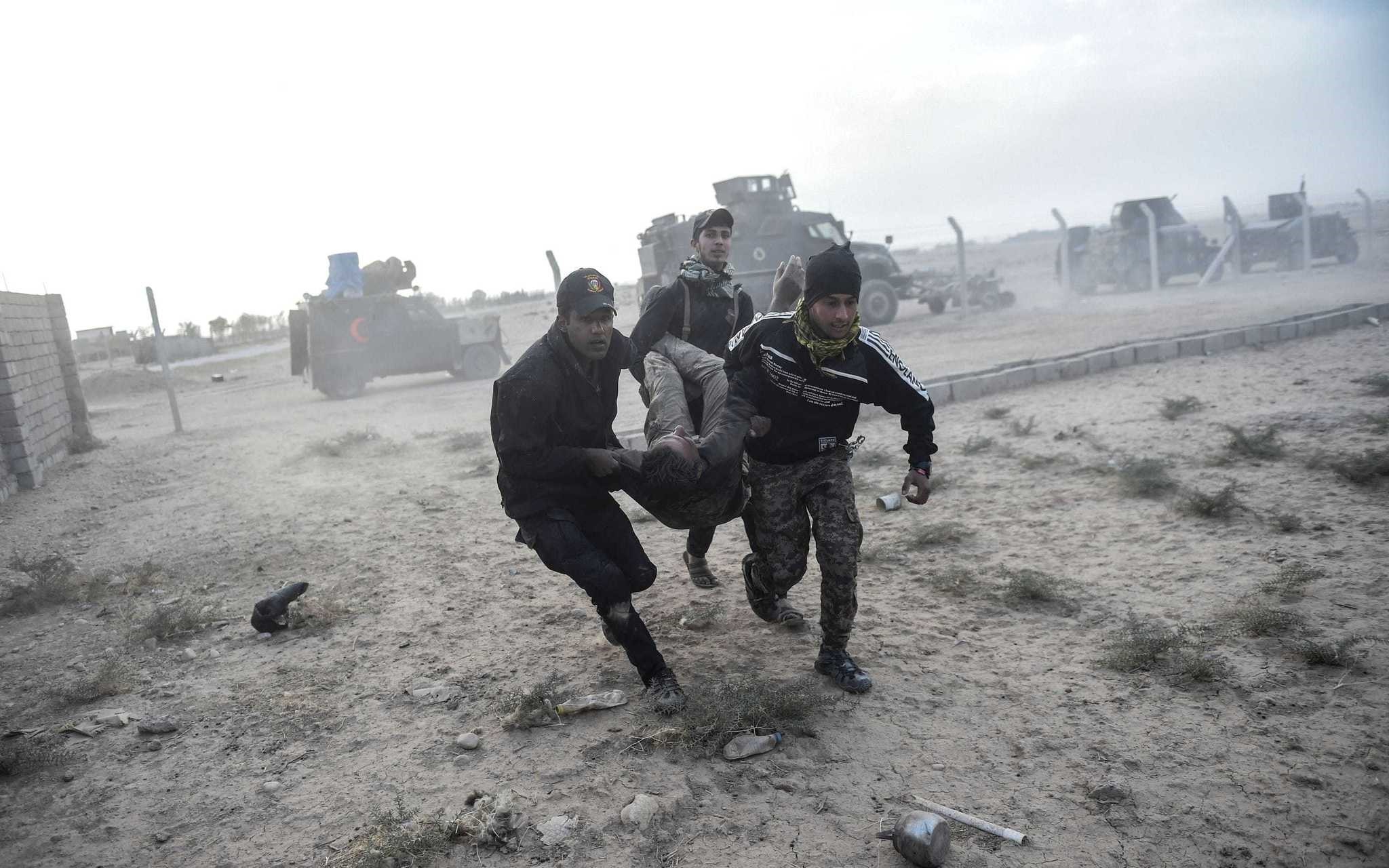 The Iraqi Counter Terrorism Section (CTS) members carry an injured comrade during clashes with Daesh near the village of Bazwaya, on the eastern edges of Mosul, on Oct 31.
by Yunus Paksoy Nov 01, 2016 12:00 am

The Mosul operation entered its third week yesterday, and the Iraqi army made the first push into the city from the eastern front. A long and fierce battle is expected in the upcoming period as Daesh has been preparing for the clashes with explosives, booby traps and suicide attack vehicles

Elite counter-terrorism forces were pounded by mortar fire as they pushed towards Mosul through the Christian town of Bartella just east of the Daesh-held city. Bartella was liberated from Daesh in the first week of the Mosul operation.

Before entering Mosul, the Iraqi army's two key targets for liberation include the Bazwaya and Gogjali villages which, according to sources on the ground, are the sole obstacles to overcome prior to entering Mosul.

"The goal is to retake Bazwaya and Gogjali, the last two villages before Mosul," said Muntadhar al-Shimmari, a lieutenant colonel with the U.S.-trained Counter-Terrorism Service (CTS).

"If we manage that, we'll only be a few hundred meters from Mosul," he said.

As Daily Sabah went to print, reports from on the ground claimed that the two villages were taken and the Iraqi army is making the first push into the city.

Backed by air and ground support from a U.S.-led coalition, tens of thousands of Iraqi fighters are converging on Mosul on various fronts in the country's biggest military operation in years. Meanwhile, The U.S. Special Presidential Envoy for the Global Coalition to Counter Daesh Brett McGurk tweeted on the subject yesterday. "Iraqi forces continue steady advance towards #Mosul this morning. Our coalition enabling with air support, equipment, ammunition," he said.

Even though the army has knocked on Mosul's doors, the push to retake the city is expected to last several weeks, if not months. Daesh is believed to have been reinforced in Mosul for a long time. In addition, concealed traps, improvised explosive devices (IEDs) as well as suicide attack vehicles have been set up in and around Mosul.

"Iran is trying to impose its influence on the region by using Shiite militias. Tehran wants the war in Mosul to last as long as possible because of the profits Tehran stands to gain," Erem Şentürk, editor-in-chief of the Turkish daily Diriliş Postası, asserted.

On the northern and eastern sides of Mosul, one of the last Daesh strongholds in Iraq, peshmerga forces recently consolidated their positions after retaking control of several villages. Humanitarian organizations have been working in a fight against time to build up their capacity to handle the anticipated mass exodus from the city while the UN says up to one million people could be displaced in the coming weeks. More than 17,000 people have already fled their homes since the operation began.

Meanwhile, trucks carrying 527 tons of humanitarian aid dispatched from Turkey arrived in the city of Irbil last week. A campaign organized by the Turkish Red Crescent and the Disaster and Emergency Management Authority (AFAD) titled, "Mosul is your home too," saw the delivery of 527 tons of humanitarian aid by trucks from the Turkish capital of Ankara.

As the Iraqi army makes slow but concrete advances towards Mosul, concerns regarding the possible slaughtering of mass numbers of people by the Shiite militias against Sunni civilians have emerged. Turkey, which joined the Mosul operation on the ground with Turkish tanks and howitzers stationed in the Bashiqa region of Northern Iraq, already has reservations regarding the large presence of Shiite militias within the Iraqi army.

Şentürk said the offensive to retake Mosul "will take longer than expected" while underscoring that a longer war will play into Iran's hands. "It would last months. I think it will at least be the summer of 2017 until the Iraqi army takes Mosul," he contended.