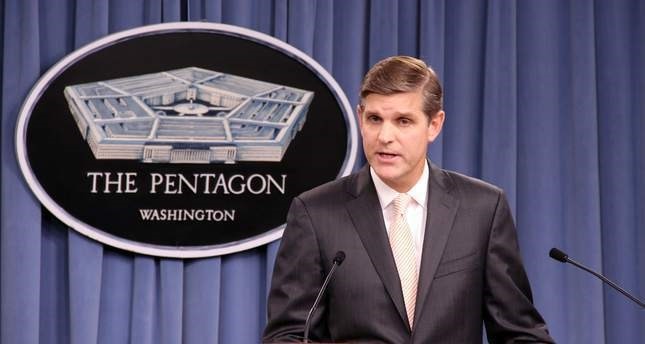 by Anadolu Agency Nov 01, 2016 12:00 am
The U.S.-led anti-Daesh coalition plans to launch operations within weeks to isolate the Syrian city of Raqqa as an offensive in Mosul, Iraq, continues, the Pentagon said Monday.

"We all feel it's important to maintain pressure on ISIL at this particular moment in time, while they're feeling the heat in Mosul." spokesman Peter Cook said, using an alternative acronym for the militant group. "The effort to liberate Raqqah will begin, as the secretary [Defense Secretary Ash Carter] said, within a matter of weeks."

Responding to a question about a disagreement between Turkey and the U.S. regarding the Raqqah operation, Cook said Ankara and Washington are still working out how to move forward with uprooting Daesh from its self-declared capital in Syria.

Carter said last week that there was an imminent need to isolate Raqqah and the U.S. would use local forces on the ground, including PKK/PYD militants.

But Ankara is opposed to the involvement of the PKK terror group's affiliates such as the PYD and its military wing, YPG, in the operation.

Turkish Deputy Prime Minister and government spokesman Numan Kurtulmus told reporters in Ankara that his government's suggestion is to use local Arabs in the operation and to hold the territory.

He also suggested that the Raqqah operation should be launched after Mosul is cleared of Daesh.

Despite the differences of positions expressed by Washington and Ankara, Cook said Turkey and the U.S. are on the same page, noting "an ongoing conversation" between the two countries.

Updating reporters about operations against Daesh in Iraq, Cook said in some places Iraqi forces are less then 1 kilometer from Mosul.

He added that the Pentagon leadership is happy with the momentum in the Mosul operation.