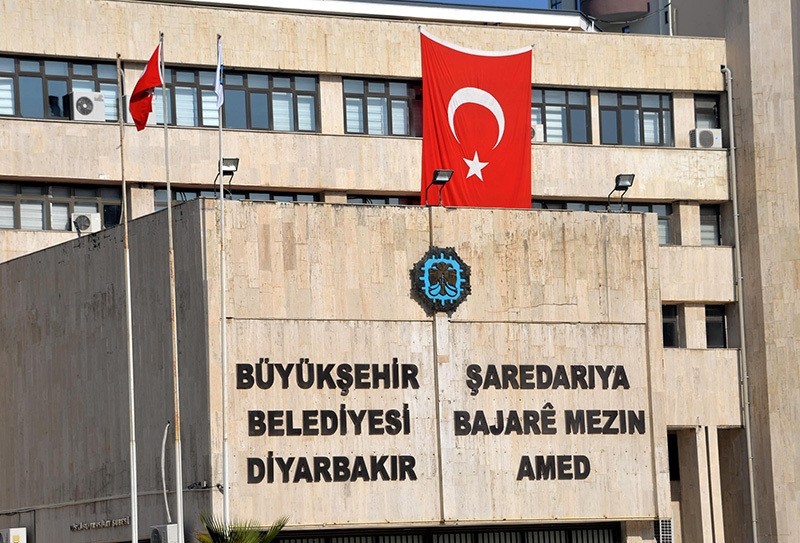 The Diyarbaku0131r municipality building is displayed in this undated photo. |DHA Photo
by Daily Sabah Nov 01, 2016 12:00 am

A district governor was appointed Tuesday to the post of Diyarbakır Metropolitan mayor in Turkey's southeast after elected mayor Gültan Kışanak, a member of the pro-PKK Democratic Regions Party (DBP), was arrested last week on terror support charges.

The new administrator, Cumali Atilla, will assume his post on Tuesday, officials said. Atilla was the district governor of Ankara's Etimesgut district.

In September, an official report by the Justice Ministry revealed at full length the involvement of DBP municipalities in various crimes, including the Diyarbakır local branch of the HDP. The provincial branch of the HDP, the DBP, has participated in nationwide parliamentary elections twice since the party was formed.

Evidence also revealed that some Diyarbarkır municipal funds were wired to PKK terrorists while the municipality also collected a large sum of money from the public under the auspices of "charity for Kobani."

Members of the HDP have previously been criticized for attending PKK funerals. Kışanak is one of those accused for attending the funeral of PKK terrorist Mehmet Şirin Kocakaya who was killed in the Lice district of Diyarbakır in a counterterror operation. HDP deputies Sibel Yiğitalp and Nursel Aydoğan also attended the funeral, which was held in the district of Bağlar. Despite the HDP's claims that they do not support the terrorist organization, the party's members and mayors have attended the funerals of PKK terrorists many times before. In the most controversial example, HDP deputy Tuba Hezer attended the funeral of the suicide bomber who perpetrated the Ankara car bombing attack on Feb. 17 that killed 28 people, most of them civilians, and left 61 others wounded.

The mayors of 29 municipalities were replaced by state administrators in early September through a governmental decree for allegedly aiding and abetting terrorists. Of the 29 mayors replaced, 25 are accused of having links to the PKK, while the remaining four are accused of links to the Gülenist Terror Group (FETÖ). Among these, two are mayors of major cities; namely, Batman and Hakkari. Twenty-four are mayors of municipalities and two are mayors of smaller boroughs. Twelve of the 29 mayors are currently in jail pending trial on charges of terrorism. All of those dismissed due to PKK links are from the DBP. The mayors of the Sur and Silvan districts in Diyarbakır were among those removed from their posts.