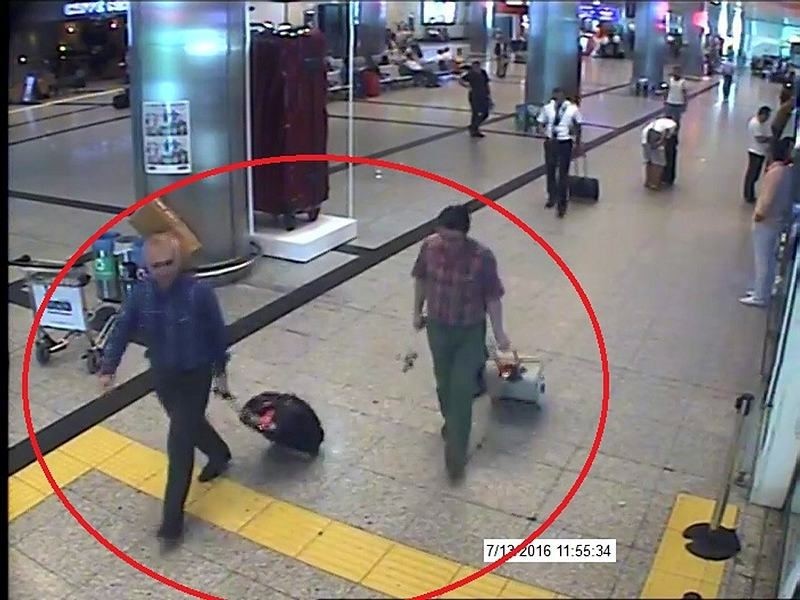 Prosecutors announced a second non-military figure was discovered in the investigation into the July 15 coup attempt blamed on FETÖ. Kemal Batmaz is accused of planning the plot with Adil Öksüz, a fugitive FETÖ figure who was at the command center of the coup with Batmaz

The chief prosecutor's office in the capital of Ankara who is investigating the July 15 coup plot announced yesterday that there was another member of the Gülenist terror cult (FETÖ) at a military base where the coup was commanded from, and he was captured shortly after the coup attempt. The suspect, identified as Kemal Batmaz, former manager of a Gülen-linked company, is accused of planning and conducting the coup with Adil Öksüz, a theology lecturer and Gülen's point man for the army, who remains at large.


Batmaz, whose presence at the Akıncı air base in Ankara on the coup night was not disclosed before, is seen walking freely around the base and conversing with officers who joined the coup in security camera footage released by Turkish media outlets yesterday. More footage shows Batmaz accompanying Adil Öksüz at Atatürk Airport in Istanbul as the two returned from the United States two days before the putsch attempt. Prosecutors say Öksüz and Batmaz flew to the United States, where FETÖ leader Fetullah Gülen resides, on Jul. 11, confirming the allegations that Öksüz went to the Pennsylvania retreat of Gülen to get his approval for the coup.


Security camera footage also shows some military officers give a military salute to Batmaz as he passes by them at the base.

Batmaz was in custody at Sincan prison where coup plotters are held when the prosecutors discovered his links to Öksüz. He was interrogated again but rejected the allegations of involvement in the coup.

Öksüz, who was released by a controversial ruling of a local court within hours of suppression of the coup attempt, is believed to have fled abroad. He was among "civilians" captured in and around the military base after security forces stormed the coup's command center where top military brass was held hostage by coup plotters. Recently the Turkish authorities offered TL 4 million ($1.3 million) for the capture of Öksüz. Hakan Çiçek, owner of a college linked to FETÖ, was another suspect captured on the base on the coup night.

Öksüz, who used to reside and work in the northwestern city of Sakarya, was a frequent visitor to Ankara and the United States and it was during one of his visits to Ankara he met military officers loyal to FETÖ and coordinated the coup plot as "imam" or point man for Fetullah Gülen in charge of overseeing the cult's activities in the army.

Like Öksüz, Batmaz was a frequent traveler to the United States and although his ultimate destination was not revealed, he flew to that country in January, March, June and July, and on the same dates with Öksüz.

Ankara prosecutors issued warrants for the detention of 12 people in connection with Öksüz and seven suspects were already detained. They were identified as people who met Öksüz in Ankara to plot the coup attempt, while others are disclosed as those who accompanied him on his trips to the U.S. to meet Gülen.

Batmaz is identified as a former manager of Kaynak Kağıt, a paper company, which was part of the Kaynak Holding conglomerate, which is viewed as the main source of finance for FETÖ. Authorities assigned trustees to Kaynak for its links to the cult last year and Batmaz left the company in May 2015 and started up a real estate business, although it is believed to be a "front company" only to hide Batmaz's role as an "imam" for FETÖ, as an investigation found the company had no financial transactions and did not lease or sell property since it was founded.

Anadolu Agency (AA) reported that Batmaz is believed to be "a more influential figure than Adil Öksüz," who is regarded as the "black box" of the coup attempt. Quoting judiciary sources, AA said Batmaz may have been in a higher rank than Öksüz within the cult.

Speaking to private broadcaster NTV, Deputy Prime Minister and government spokesman Numan Kurtulmuş said it was not clear yet whether Batmaz was one of the figures behind Öksüz's plot. "I personally think Öksüz is simply a puppet and there might be other figures. The investigation will show the extent," he said. Kurtulmuş said that the discovery of Batmaz deepened the investigation and prosecutors may find new evidence regarding the coup especially based on the testimony of detainees who agreed to collaborate with authorities.

A third man was also detained after the coup attempt along with Batmaz and he was identified as electronics engineer Harun Biniş. Biniş, seen entering rooms in security camera footage of Akıncı air base's command floor released yesterday, told interrogators after his capture he was at the base "to look for a plot of land to buy," parroting the first testimony by Öksüz to interrogators after his capture. Biniş was also identified as one of those who attended the meetings of Öksüz with coup officers at a villa in Ankara prior to the putsch attempt. Biniş, a former executive at a technology company linked to FETÖ, was already implicated in a case for illegal wiretapping of politicians, judiciary members, businesspeople and military officers. He was a suspect in the case of the Telecommunications Authority or TİB, a state-run agency that was closed after the coup attempt. Gülenist staff at TİB where Biniş was contracted to install communications systems were accused of illegal wiretapping operations according to media reports.

The coup attempt, the first time when FETÖ turned to violence to seize power after two foiled attempts to overthrow the government in 2013, was staved off thanks to strong resistance by the public heeding the president and prime minister's calls to "take to the streets." Some 241 people were killed by coup troops firing on the resisting public, as well as fellow troops opposing the putsch and police officers.