Turkey reiterates determination to push back Daesh, YPG terror from south of its border 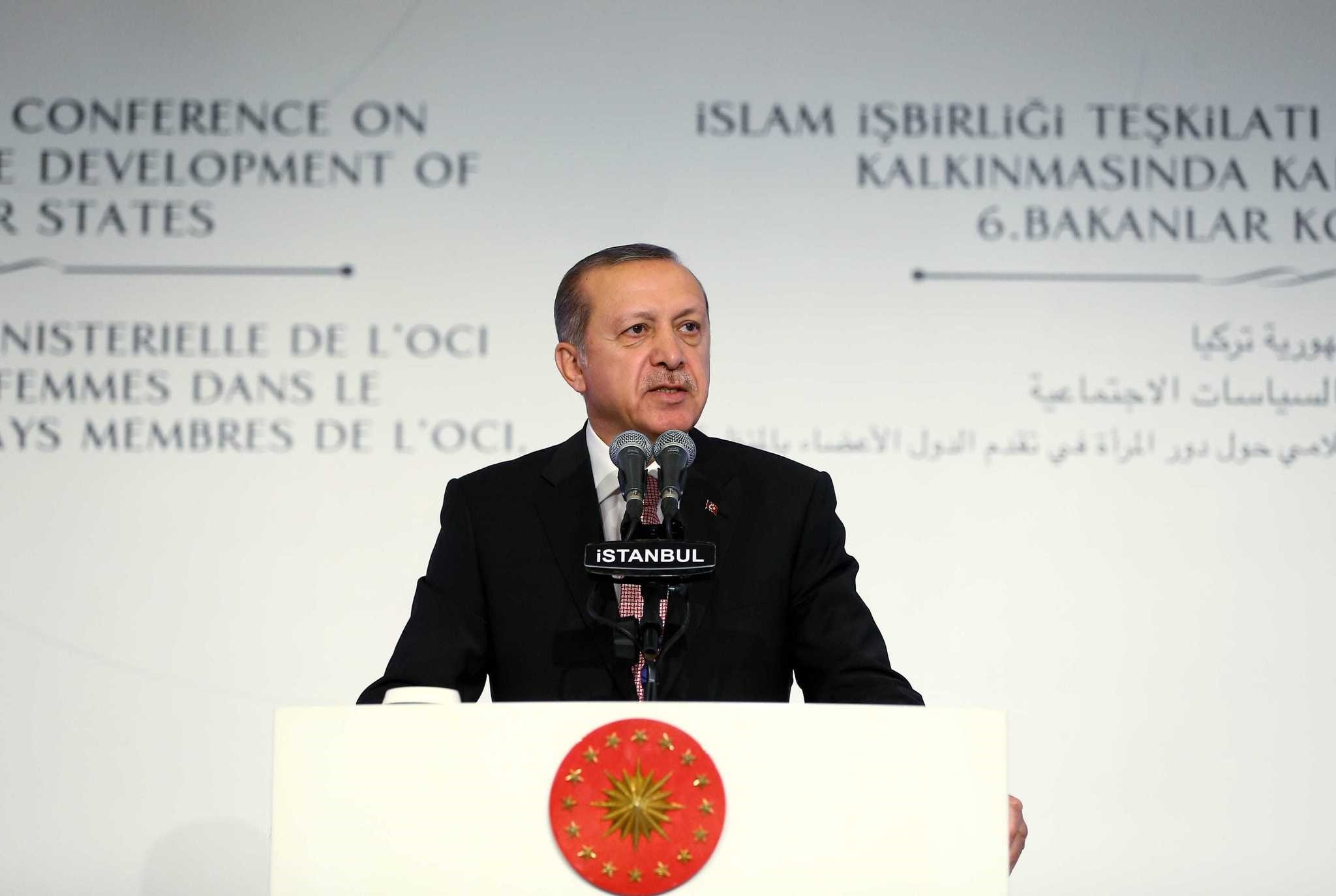 President Recep Tayip Erdou011fan delivered a speech at the opening of the 6th Conference on the Role of Women in Development of OIC Member States on Nov. 2.
by Daily Sabah Nov 03, 2016 12:00 am

President Erdoğan restated Ankara's position against the PKK's Syrian offshoot, YPG terrorists, yesterday, saying Turkey will not allow the establishment of a terror state south of its border and Operation Euphrates Shield will continue against Daesh in Syria

Ankara has restated its stance against the establishment of an area controlled by the Syrian offshoot of the PKK terror organization, the People's Protection Units (YPG), in northern Syria, and that the support to the Free Syrian Army (FSA) against Daesh will continue as part of Operation Euphrates Shield.

President Recep Tayyip Erdoğan said yesterday that Turkey's call for establishing a terror-free zone in northern Syria has been left unanswered as the aim is to establish a YPG terror state in areas recaptured from Daesh.

Speaking at the Senior Official Meeting of the sixth Ministerial Women Conference in Istanbul, Erdoğan said that Turkey will not allow the execution of such a plan, and added: "What will happen in Iraq's Kirkuk, Mosul, Telafer and Sinjar is an unknown. Some try to advise us, saying do not be concerned with Iraq and Syria. We are the ones with a 950-kilometer border with Syria and 350 kilometers with Iraq. How can we be not concerned?"

Turkish authorities have long argued that the fight against Daesh should be done through supporting local forces in both Iraq and Syria. However, Washington has seen the Democratic Union Party (PYD) and the YPG as its partners in Syria against Daesh, despite the initial support to the moderate opposition forces. The U.S.'s military and logistical support to Syrian Democratic Forces, predominantly led by the YPG terrorists, has also led to a diplomatic dispute with Turkey, as Ankara considers the presence of the YPG on its border as a national security threat, due to its link with the PKK, which Turkey, the U.S. and the European Union recognize as a terrorist organization. The EU and the U.S., however, do not recognize the YPG/PYD as a terrorist organization. Meanwhile, Turkey also argues that the YPG aims to change the demographics of the areas captured from Daesh by forcefully pushing out the local Arab and Turkmens residents.

Erdoğan added that as a result of the success through Operation Euphrates Shield, the Syrian towns of Jarablus and al-Rai have been cleared of the Daesh terror group. "The aim is to move southwards to al-Bab. Because we want to establish a terror-free area," Erdoğan added.

Turkey argues that a terror-free area established in northern Syria will also contribute to the humanitarian crisis arising from the refugee influx due to the civil war, which began in 2011.

Ankara has been pushing southwards, supporting FSA forces as part of Operation Euphrates Shield, launched on Aug. 24, to now clear al-Bab from Daesh terrorists and form a 5,000-square-meter terror-free zone, comprising of the towns of al-Bab, al-Rai, Azaz, Jarablus and Manbij. The terror-free corridor will ensure security for Turkey's southern border with Syria, while providing a safe shelter for locals in the region, which would stop the mass influx of refugees coming into Turkey.

Both Daesh and the PKK/PYD terrorist groups have been targeted by the opposition FSA aided by Turkish tanks, artillery and aircraft since the launch of Operation Euphrates Shield.

Meanwhile, President Erdoğan also criticized the Muslim states supporting Syria's Bashar Assad, saying, "How can supporting the butcher Assad be an Islamic attitude? He has killed more than 600,000 Muslims." He added that despite the lack of sufficient financial support from the international community, namely the EU, Turkey will continue to do all that is necessary for the nearly 3 million refugees it has been hosting in the country.
Last Update: Nov 03, 2016 9:38 am
RELATED TOPICS