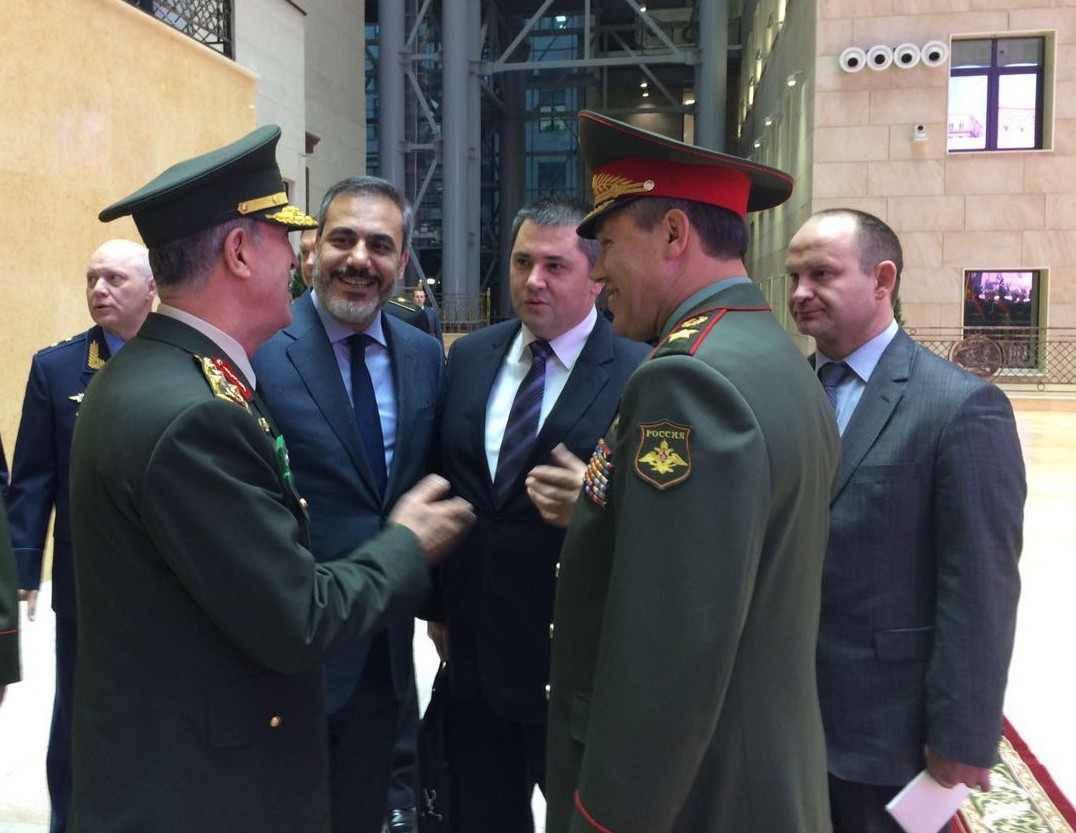 On Wednesday, the Turkish Armed Forces (TSK) published in a statement about the top military chiefs' meeting, stating the two discussed solutions for the Syrian crisis, the normalization of the situation in Aleppo, increasing military coordination against terrorism and eliminating the Daesh threat in the region.

"Increasing military cooperation between Turkey and Russia is in an important phase towards forming a strategic alliance between the two countries," Eşref Yalınkılıçlı said to Daily Sabah, a freelance Eurasian analyst and journalist for TRT World. He went on to say Russia has started to understand sensitiveness, and the halting of airstrikes on Aleppo could be evaluated in this extent. He added that as Turkey knows that Russia is the most important actor in Syria, it carries out intense diplomacy with Russia regarding the Syrian crisis.

"Real politics is forcing the countries to cooperate," he said.

On Sept. 15, Akar and Gerasimov also met in Turkey, the highest-level military contact between the countries since the crisis in relations last year. Gerasimov's presence in Ankara was seen as an important sign in healing the ties between the two countries.

On the other hand, according to Sabah newspaper, a high-level source said Turkey is expecting an offer from Moscow regarding the purchase of a Russian S-400 missile system in what could be the culmination of Ankara's long-awaited procurement process for the purchasing of a long-range missile defense system.

Yalınkılıçlı said a lack of defense missile systems has been one of Turkey's major weaknesses and the country should close this gap as soon as possible.

"Turkey-China talks on the defense missile system did not positively end up; on the other hand, Turkey also could not reach a deal with the western countries, as they took no prisoners on transferring technology. The country is open to threats from several countries including Syria and Iraq. That is making possible a missile deal with Russia," he said.

Turkey's long-known desire to purchase a long-range air missile defense system has been a hot topic since 2013 and speculations that began to swirl among the defense industry followers when Turkey held talks with the French-Italian consortium Eurosam regarding the SAMP/T Aster 30 missile defense system. This was mixed with surprise following a statement by Kremlin spokesman Dmitry Peskov, indicating that Russian President Vladimir Putin and his Turkish counterpart President Recep Tayyip Erdoğan recently discussed the possible supplying of a Russian air defense system to Ankara on Oct. 14.

"Before everything, I want to express my gratitude to President Putin and the Russian people, as they showed us convincingly who our real ally is. President Putin sends us his full support, including sharing intelligence during the coup attempt. Turkish people will never forget this," Çavuşoğlu said.

Putin gave his support to Turkey after the July 15 failed coup attempt and said he stood by the elected government, offering his condolences to the victims of the attempt.

Relations had hit a low in November 2015 after Turkish jets downed a Russian Su-24 bomber near the Syrian border for violating Turkish airspace. Turkey provided radar data proving that the Russian planes breached the border while Moscow insisted that the warplane had not crossed it.