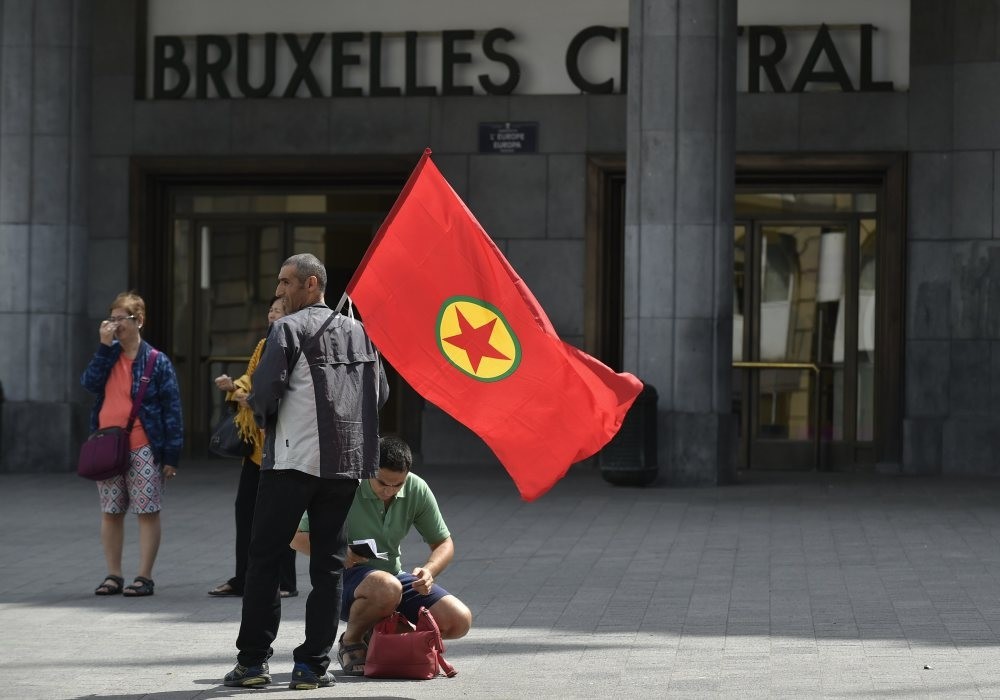 While EU countries continue to remain apathetic towards terrorism in Turkey and a passive enabler of the PKK, the safe haven offered to terrorists by Germany and Belgium has created an anomaly and outrage among Turkish people

Countries in the EU continue to be a safe haven for terrorists from several groups including the PKK terrorist organization, the Revolutionary People's Liberation Party-Front (DHKP-C) and the Gülenist Terror Group (FETÖ), as terrorists flee Turkey to these countries where they find shelter and avoid facing trial. Germany's widespread tolerance and attitude of support toward terror suspects from multiple terrorist organizations is raising ire among Turks.

Turkish President Recep Tayyip Erdoğan Thursday said that terrorism is "like a boomerang" that would eventually turn and strike Germany. "You will be remembered as the supporters of terrorism. We are worried that Germany, which harbored terrorist groups like the PKK and the DHKP-C [a far-left terrorist group that carried out a string of attacks in Turkey in recent years], is now turning into a safe haven for FETÖ activities," he said.

Germany has allowed PKK terrorist propaganda to be spread by supporters of the terrorist organization, allowing rallies to be held freely and even allowing a speech by a senior leader of the group. Despite the PKK being an internationally recognized terrorist organization, in 2011 Germany allowed PKK terrorist leader Murat Karayılan to speak via a video conference call at the 19th Kurdish Cultural Festival in Köln. In anomalous contrast, the country did not allow President Erdoğan to speak at a anti-coup rally in Cologne via video call in early August.

Nowadays, Germany faces criticism for its refusal to pursue the FETÖ members whose sympathizers freely operate in the country, operating schools and large companies despite several of the prominent Gülenist figures residing in Germany being wanted in Turkey. They are believed to be in hiding.

Former Editor-in-Chief Can Dündar, for whom a Turkish court issued a detention warrant earlier this week for aiding FETÖ, resides in Germany after fleeing there shortly before the failed July 15 coup attempt. Germany not only provided shelter to Dündar but also issued a temporary passport for him, and allowed him to stay in the country and travel abroad even if his Turkish passport becomes cancelled. According to the Deutsche Welle Turkish, Dündar was also invited by Joachim Gauck for a meeting next week at the Bellevue Presidential Palace.

Two prominent FETÖ prosecutors, Zekeriya Öz and Celal Kara, are also in hiding in Germany after fleeing Turkey. The controversial prosecutors played a key role in the most controversial cases in the last 10 years in Turkey, including the anti-corruption probe in late 2013 that was organized to overthrow the democratically elected government and targeted senior political figures. Later, it was revealed that the fabricated false evidences during the cases that they carried out. On Oct. 26, Ankara has asked German authorities to find, detain and hand over the prosecutors. However, German Justice Minister Heiko Maas, who told reporters on Wednesday that Berlin would not extradite any suspects if they faced "politically motivated charges" in Turkey.

Belgium has been known for another safe haven for PKK and DHKP-C terrorists and has come under fire from Turkish authorities before as well for their tolerance of PKK demonstrations in the country, such as setting up a tent in downtown Brussels with an exhibition of pro-PKK propaganda and allowing the residence of suspected terrorists.

The Belgian government allowed supporters of the PKK to pitch tents before the Turkey-EU summit in Brussels in March, a move that had caused a diplomatic row between Brussels and Ankara. Turkey's foreign ministry had summoned Belgium's ambassador to Ankara to the ministry to protest the decision and swiftly remove the tent. In August, a pro-PKK rally to mark the anniversary of the group's first attack against the Turkish state in 1984 was held in Brussels. The last anti-terror operation by Belgian security forces against the PKK took place in 2010.Meanwhile, a Belgian court recently issued a scandalous decision and ruled that the charges of abduction of minors, deprivation of liberty and death threats on 36 PKK-linked suspects cannot be considered as "terror crimes" since the PKK's activities were an "armed struggle" and cannot be considered within the scope of terrorism. The decision was taken despite PKK being recognized as a terror organization by the EU, Turkey and the U.S. Turkey's Foreign Ministry released a statement regarding the issue on early Friday and condemned the Belgian court's ruling and noted that Turkey expects Belgian justice to take steps to immediately fix the "grave mistake."

Just like PKK members, Fehriye Erdal, a member of the DHKP-C who was involved in the killing of a prominent Turkish businessman Özdemir Sabancı in 1996, fled to Belgium after the murder and was not extradited to Turkey despite Ankara's demands. The country also does not recognize her as a terrorist and describes her as a "gang member."

Also, just like Belgium and Germany, other EU countries including Austria, Denmark, France, the Netherlands, Sweden and Greece, has been a safe haven for the PKK and DHKP-C, which have been very active in the country.

Since the PKK – also listed as a terrorist organization by the U.S. and the EU – resumed its 30-year armed campaign in late July, hundreds of members of the security forces and civilians have been killed.

Though the PKK is on the EU's official terrorist organization list, Turkey has complained of member states' indifference towards the terrorist group. Ankara argues that although EU leaders condemn PKK terror in rhetoric, the activities of the group in the EU countries contradict the EU authorities' stances.
RELATED TOPICS