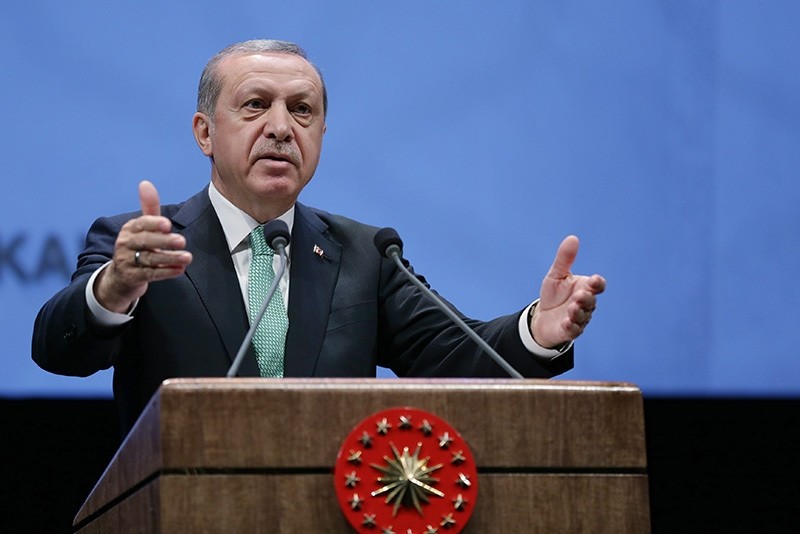 Ankara criticized yesterday the European Union's stance on the PKK terror group, saying EU states turn a blind eye to the terror attacks against the Turkish state and its people as well as the activities of the group within the borders of the EU.

Speaking during a ceremony in Istanbul, President Recep Tayyip Erdoğan said the EU is aiding and abetting the PKK terror group and despite it being listed as a terror organization by the EU, the union has turned into a safe haven for the group's members, including its leadership figures.

Erdoğan said weapons confiscated from the PKK in recent anti-terror operations are mainly Western-made, including heavy weaponry. "When we ask that how these weapons fell into the hands of the PKK, their answer is ready; they claim that these were sent to the anti-Daesh coalition," Erdoğan said.

Erdoğan responded to the remarks against Turkey made by some EU politicians after several Peoples' Democratic Party (HDP) deputies, including the co-chairs of the pro-PKK HDP, Selahattin Demirtaş and Figen Yüksekdağ, were detained after refusing to bear testimony under the scope of ongoing terror probes.

"After the recent developments the EU ministers are attacking Turkey. They go and visit the known [HDP] party. What will happen? You will come and go. You are going to change the decision here? There is law here. When we tell them [EU] something, they say 'we have rule of law.' If you have independent law, the rule of law here is also independent. Just like you [EU] ask to be respected, you will also respect us," Erdoğan said and added that despite Turkey's continuous warnings to EU leaders on PKK terrorism, EU leaders remain inactive in taking the necessary steps against the terror group.

"Since July 20, 2015 the PKK terror organization has killed 787 security forces and 312 civilians. In the attacks, more than 4,000 security forces, and more than 2,000 civilians have been injured. In operations against the separatist terror group, more than 5,500 weapons, 650,000 ammunition, 142 tons of explosive material, and nearly 15,000 bombs were confiscated," the president said, adding that the West turns away from the realities of the terror organization.