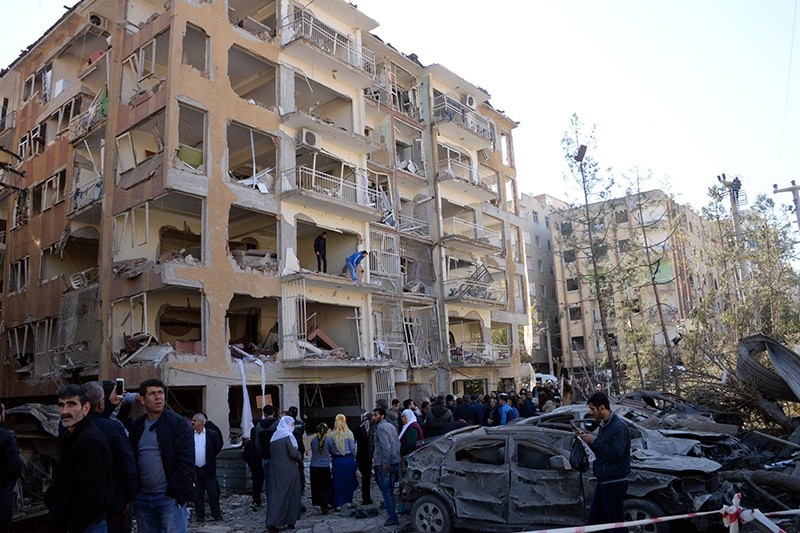 A group affiliated with the PKK terrorist organization, known as the Kurdistan Freedom Hawks (TAK), assumed responsibility yesterday for Friday's terror attack in the southeastern city of Diyarbakır that killed 11 people. The PKK-affiliated Fırat News Agency (ANF) reported the TAK had carried out the car bombing.

The Diyarbakır Governorate previously said the attack was carried out by the PKK terror organization, which controls an extensive and complicated terror network, including TAK.

The governorate reiterated its position on Sunday and said evidence, including three different radio conversations, point to PKK involvement in the attack. In the exposed radio conversation by intelligence sources, the terrorists communicated with each other on Saturday around 9:30 a.m., revealing how, where and by whom the attack was carried out. One of the terrorists tells the other one to ensure he writes down that the attack was committed by suicide bomber Kemal Hakkari (Kemal Hunres) on his reports. The governorate also said conflicting reports aim to whitewash PKK involvement in the attack.

Meanwhile, using Daesh-affiliated Amaq News Agency as a source, Reuters reported Friday that the attack was carried out by Daesh militants. Previously, Daesh has claimed attacks it had not carried out in other parts of the world. Prior to the PKK-affiliated TAK claiming the attack, Peoples' Democratic Party (HDP) Diyarbakır deputy Ziya Pir posted a tweet on Saturday saying Daesh had targeted the deputies at the police station in Diyarbakır in the attack.

The bombing was carried out near the counterterror and riot police branch in the district of Bağlar during morning rush hour, killing 11 people and injuring over 100. The majority of the casualties from the attack were civilians.

TAK, often cited as PKK hardliners aiming to bring PKK armed insurgency and guerrilla tactics to Turkish cities to cause more intimidation and fear among the public, is also mentioned as a public relations effort of the PKK to distance itself with attacks against civilians especially in the eyes of Western public opinion.

The group has previously claimed various attacks on civilians that took place in recent periods.

On Feb. 17, TAK assumed responsibility for the car bomb attack that killed 29 people, mainly military personnel, in central Ankara during evening rush hour. Again in Ankara, 37 civilians were killed when a car bomb was driven into civilians at a busy bus stop and detonated on March 13.

On June 10, a TAK-claimed car bomb detonated while a riot police shuttle bus was passing in Istanbul's Fatih district, killing 12 people, including five civilians, while injuring dozens of others.

At least 13 people were injured when a suicide bomber detonated himself near the historic Ulu (Grand) Mosque in the northwestern city of Bursa on April 27.

TAK also claimed the mortar attack on Istanbul's Sabiha Gökçen Airport on Dec. 23, 2015, that left an airport cleaner dead and injured another, while damaging five aircraft.