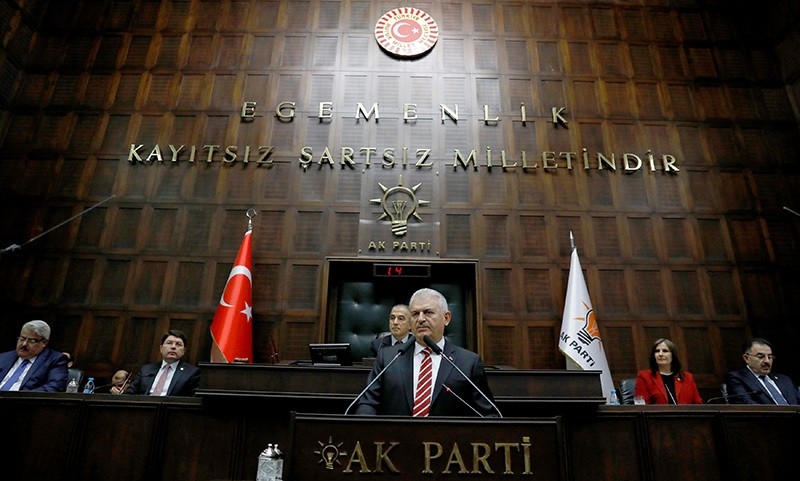 Prime Minister Binali Yu0131ldu0131ru0131m addresses members of parliament from his ruling AK Party (AKP) during a meeting at the Turkish parliament in Ankara, Turkey, November 8, 2016 (Reuters Photo
by Yunus Paksoy Nov 08, 2016 12:00 am

As European Union-member countries remain indifferent toward the PKK, causing friction in Turkish-EU relations, the terrorist group has recently upped its violence across Europe against Turks and Turkish businesses. The PKK also poisons European youths through its wide network of illegal drugs.

Ankara has long slammed Brussels for allowing PKK supporters to spread terror propaganda and incite hatred towards Turks. Recent violent attacks against Turks in EU cities such as Paris, London, Vienna, Frankfurt and many others could go unpunished as they have in the past.

On Monday, two Turkish citizens were attacked by PKK supporters in London. Ceylan Nas, 25, and her fiance, 28-year-old Burak Taş, were appalled when their complaint was turned down by police. Ceylan said they were attacked by PKK sympathizers in the British capital, to which the police remained unsympathetic.

The PKK is engaged in drug and human trafficking, robbery, counterfeiting, the abduction of children, money laundering and other organized crimes in many European countries. Prime Minister Binali Yıldırım yesterday drew attention to the PKK's network of drug business in the EU.

"I am calling on our European friends to stop bothering themselves with Turkey's legal processes and focus on fighting the PKK and drug-runners who poison your youth and future with drugs," Yıldırım asserted.

A branch of the Yunus Emre Institute in central London was also attacked. However, the police did not go to the scene of the incident, eyewitnesses said.

The PKK terrorist organization is active in all phases of drug trafficking including production, delivery, distribution, and sales, according to a narco-terrorism report. The PKK's annual revenues from cannabis production and sales are around TL 500 million ($170 million) and $1.5 billion separately from drug trafficking, the report said.

Suspected PKK terrorists set a vehicle belonging to Turkey's consulate general on fire in the German city of Hanover on Sunday. The suspected arson attack left the car gutted. In addition, the Turkish consulate in the French city of Nantes was attacked Saturday night when a Molotov cocktail was thrown at the building.

"EU politicians who make careless statements about Turkey are to blame for such attacks," said Enes Bayraklı, a foreign affairs specialist at the Foundation for Political, Economic and Social Research (SETA) and an academic at Istanbul's Turkish-German University. Bayraklı asserted that PKK supporters are finding the courage to attack Turks in the EU knowing that EU politicians are behind them.

PKK supporters held several rallies across Europe after the detention of pro-PKK Peoples' Democratic Party (HDP) deputies. Scores of people were on well-known European streets holding banners in support of the terrorist organization.

Also on Sunday, a group of unidentified attackers threw stones at a mosque and a Turkish cultural center in Stockholm.

"The main target of drugs is Europe and the young people of Europe," the prime minister said in his speech at his party's parliamentary group meeting, adding that in Turkey, the PKK reaps around $2 billion annually from drug dealing.

In Austria, a mosque was targeted in the Rankweil region of the country. A suspected PKK supporter attacked the mosque.

"EU lawmakers demonize Turkey. They legitimize attacks against Turks and the Turkish government. The EU has to protect Turks living in EU countries," Bayraklı said.

Ankara has been railing at EU countries for remaining indifferent to the PKK and its supporters across the continent. The PKK erected a tent in front of the European Council building in Brussels after PKK supporters received permission from the Belgian government to keep the tent up until the end of March. Despite pledges to cooperate in the fight against terrorism, this move from the Belgian government raised eyebrows in Turkey.

Such a tent was set up in the Austrian capital in June as well. The PKK supporters received permission from the Austrian government to set up the tent, adorned with posters of jailed PKK leader Abdullah Öcalan, and a flag for the terrorist organization, for 10 days in Stefanplatz Square.

Also, a photo exhibition was held at the European Parliament featuring leaders and members of the PKK terrorist organization and its Syrian offshoot the Democratic Union Party (PYD).