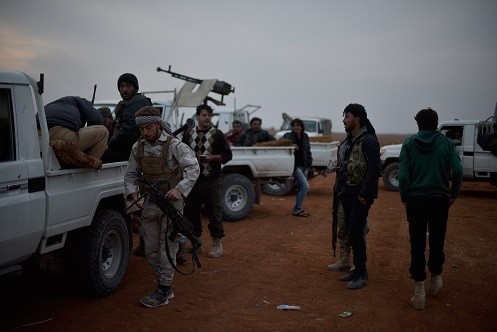 The Turkish military-backed Free Syrian Army (FSA) is only a couple kilometers from the strategic Daesh-held town of al-Bab, an FSA commander told Daily Sabah on Sunday.

"We are around two to three kilometers from al-Bab," FSA commander Muhammed Şıhlı told Daily Sabah in an exclusive interview.

Having liberated Dabiq, which was a vital town for Daesh militants, FSA fighters have set their sights on al-Bab. Opposition fighters have recently accelerated their march toward the town, liberating villages and towns along the way to al-Bab.

Daesh previously said that Dabiq would be the battlefield for a doomsday war based on their belief. However, the FSA dashed Daesh's hopes by taking full control of the town in a short time.

Commenting on how long it could take to seize al-Bab, the FSA commander said that it would depend on Daesh's resistance in the town. The terrorist group is believed to have reinforced its manpower in al-Bab to hold it.

The FSA has expanded operations to al-Bab due to its geostrategic position between the cities of Manbij and Aleppo. If the PKK's Syrian offshoot, the Democratic Union Party (PYD) seized al-Bab, it would be able to connect its cantons in the West and East and establish a terrorist corridor.

Another FSA commander, who wanted his name to remain anonymous, told Daily Sabah that the opposition army has launched an operation to seize al-Bab from the western and northern fronts. "It could take days or weeks. We will see how reinforced Daesh is in the town," the commander said.

Ankara wants to establish a 5,000-square-kilometer safe zone in Syria. To reach this goal, the Turkish government decided to arm and support moderate FSA forces on the ground. The opposition army quickly secured a safe line along the Turkish-Syrian border by connecting Azaz and Jarablus.

Al-Bab's liberation will deal another blow to Daesh as well. The terrorist group manages its economic and logistic activities from the town. In addition, Daesh will have lost another psychological war against Turkish military-backed opposition fighters.

President Recep Tayyip Erdoğan has recently been renewing his calls for the liberation of al-Bab. "Now they say, 'Do not go to al-Bab.' We have to; we will go. Why? Because we need to prepare a terror-free zone there," Erdoğan said in late October.

"We need a terror-free zone in Syria," the president asserted, referring to the Turkish government's plan for a 5,000-square-kilometer safe zone.

As the Turkish government seeks to be free of Daesh and the YPG threat in Syria, it remains unknown how far the FSA will march if the strategic town of al-Bab is taken.

Turkish-backed Syrian opposition forces have taken control of six more residential areas from Daesh, according to a statement issued by the Turkish military yesterday.

Within the scope of Operation Euphrates Shield, which began on Aug. 24 to rid Syria's northern border area of terrorists, 24 Daesh targets have been eliminated, including shelters, defensive positions, command centers, weapons and vehicles.

Almost 1,600 square kilometers (617 square miles) of land in northern Syria has been cleared of Daesh terrorists as part of Operation Euphrates Shield so far.