Germany insists it does not support PKK despite own intelligence reports 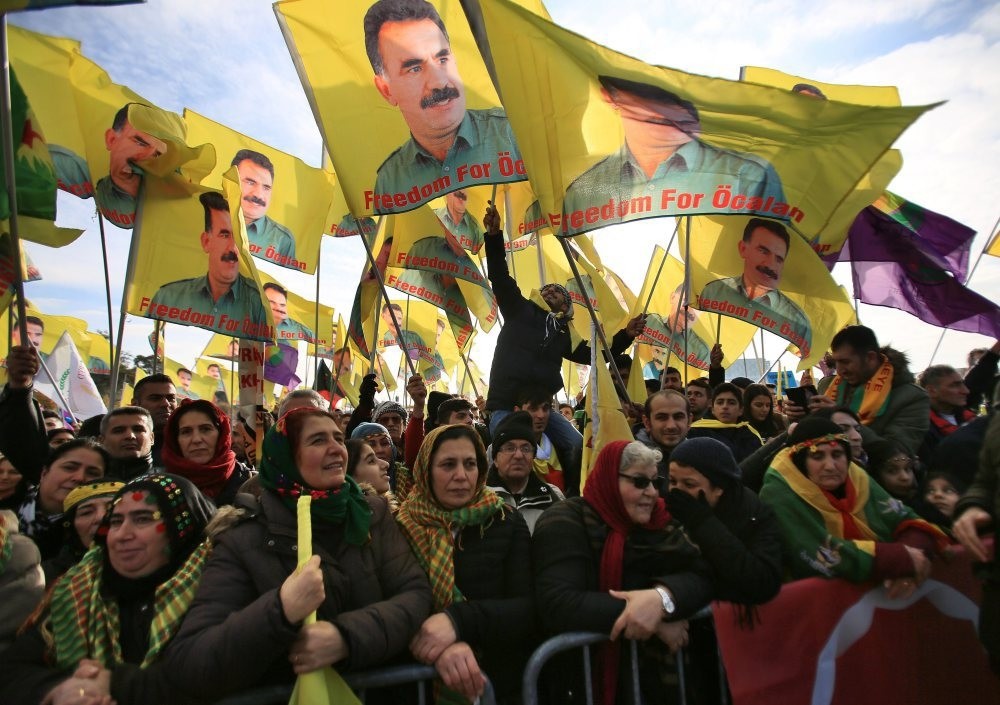 Pro-PKK demonstrators held a rally in Cologne, Germany with PKK flags and banners of PKK leader Abdullah u00d6calan in early November.
by Yunus Paksoy Nov 18, 2016 12:00 am

The German interior minister rebuffed claimed that the German government tolerates the PKK and lends support to it. However, a lawmaker from the ruling AK Party contended that there are intelligence reports hinting at collaboration between Germany and the PKK

Even though Ankara contends that there are German intelligence reports that the PKK can freely recruit militants and manage its activities in Germany, German Interior Minister Thomas De Maiziere rebuffed the claims. Responding to the claims, Maiziere said that Germany considers the PKK to be a terrorist group, which the German government fights in Germany.

However, German intelligence reports show that the PKK can freely recruit for militants in the country, even though the group is recognized as a terrorist organization, claimed a senior Turkish lawmaker Wednesday.

Mustafa Yeneroğlu, the head of Parliament's Human Rights Inquiry Committee, said there are German domestic intelligence reports clearly demonstrating that the PKK is recruiting and racketeering in the country for terrorism and bringing fighters to Turkey and Iraq.

Speaking to Daily Sabah, Yeneroğlu asserted that he is astonished at the German government's surprised stance toward the claims. "German intelligence reports clearly show the reality. However, the PKK freely operates in Germany, recruiting militants, terrorizing the country," he said, pointing out the German government's hypocrisy in the face of the reports.

De Maiziere also said that the German government is ready for cooperation with Ankara in the fight against the PKK.

Recently, Hans-Georg Maassen, Germany's head of the German Federal Office for the Protection of the Constitution, denied claims that Germany has not responded to more than 4,000 requests from Ankara for the extradition of fugitive PKK terrorists.

Foreign Minister Mevlüt Çavuşoğlu said on Tuesday that there were outstanding legal cases against 4,500 PKK members in Germany, but only three suspects had been sent back to Turkey so far.

Yeneroğlu slammed German media as well. Railing at German media outlets for their one-sided coverage, he said they abstain from calling the PKK terrorists and condemning PKK violence. "Germany lends these [terrorists] very significant support. I gave Chancellor [Angela Merkel] 4,000 documents regarding this. When I asked her about what they have done, she said that the judicial process was continuing," President Recep Tayyip Erdoğan said in late July, pointing the finger at the German government for their lack of cooperation.

Despite the PKK being an internationally recognized terrorist organization, in 2011, Germany allowed PKK leader Murat Karayılan to speak via video conference call at a festival in Köln.German deputy Nicole Gohlke from the Left Party attended a PKK rally on Oct. 18, 2014 where she gave a speech in front of a banner of imprisoned PKK leader Abdullah Öcalan and much to Turkey's dismay, raised the PKK flag. Upon the Munich prosecutor launching an investigation, Gohlke's immunity was lifted and she was fined 1,000 euros.

Regional Deputy Jan van Aken also showed a PKK flag during a speech in the Bundestag in March 2015.

In addition to Germany's support for the PKK, members of the Gülenist Terror Group (FETÖ) also find a safe haven in the country. According to the SWR, a German broadcaster, some Turkish military officers assigned at a NATO headquarters requested asylum from Germany. Some 30 to 40 Turkish military officers are believed to be tasked at the headquarters.Previously, German officials said that 35 Turkish diplomats and family members with suspected links to FETÖ applied for asylum in Germany after the failed July 15 military coup attempt in Turkey.
RELATED TOPICS