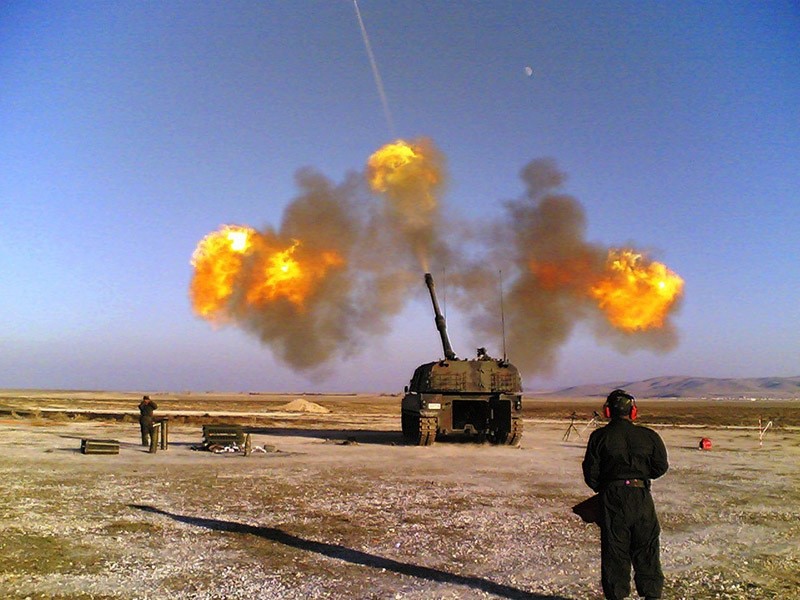 Turkish artillery units stationed on the Syrian border started to bomb the positions of YPG, PKK's Syrian affiliate, on Thursday afternoon following the advances of the terror group towards the northern Syrian town of al-Bab. Their advancement comes despite initial U.S. pledges that they would withdraw from west of the Euphrates Rivers.

Military sources report that Turkish army started heavy artillery shelling against YPG elements following the move of the terror group towards al-Bab, overrunning eight more villages and approaching as close as 9.8 kilometers to the strategically-important town.

The PYD/YPG are aiming to occupy al-Bab in order to create a corridor linking the areas they control in northwestern Syria, known as Afrin canton, with the territories they hold in northeastern Syria.

The Turkish bombardment targeted YPG positions located to the west of the northern Syrian city of Manbij.

Turkish authorities, including President Recep Tayyip Erdoğan, have reiterated several times that Turkey will not allow any PYD authority to have permanent control to the west bank of Euphrates, and that this constitutes a red line for Turkey.

Deputy Prime Minister Numan Kurtulmuş said on Thursday that PYD/YPG terrorists will either withdraw from Manbij and the west of Euphrates River or they will be withdrawn.

The move comes after U.S. pledges, repeated several times over the past months, that the YPG will withdraw from the west bank of the Euphrates River have not materialized.

Lastly, President Barack Obama's special envoy supervising the counter-Daesh fight, Brett McGurk, tweeted on Wednesday that YPG fighters will leave after the training of local forces is complete. However, it later appeared that YPG terrorists, far from withdrawing, were resuming their advances west of the Euphrates at the same time as U.S. officials were pledging their removal.