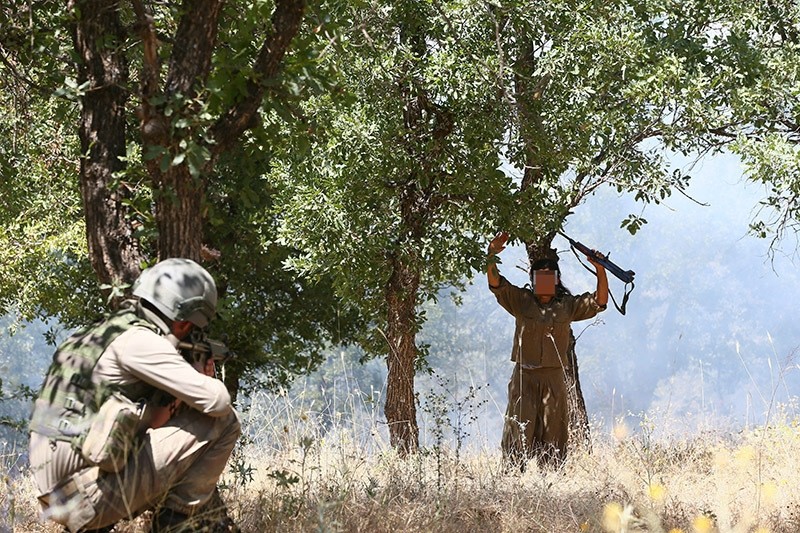 Since Jan. 1, a total of 457 PKK terrorists have so far fled the outlawed organization and have surrendered to Turkish security forces, said the Minister of Interior Affairs Süleyman Soylu on Wednesday.

Soylu said that 2016 has been the year which witnessed an all-time high in the number of PKK terrorists surrendering to security forces for the last 17 years.

''We are not dealing only with the terrorists themselves; we are at war against all factors and underlying structures causing terrorism. I want to put it clearly that we have no tolerance for anyone helping and providing arms to terrorists militarily, or even those giving moral support.'' Soylu added.

Soylu also announced that Turkey had prevented 214 suicide bombing attempts and terrorist attacks by the PKK / KCK terrorist organizations, 34 by Daesh and 10 attacks by radical leftist groups in 2016.

Pointing out that there were 109,000 associations in Turkey, Soylu said: "Only about 1% of these associations have been shut. We need to think rationally when trying to establish a link between cities and terrorist organizations, how these terrorists find their recruits. I would like to state that we are face to face with a structure which supports the PKK internally and externally through NGOs, providing human-resource and financial support. This is not just a threat for today's government, but also a threat to our unity and solidarity. "

The terrorist group resumed a 30-year armed campaign against the Turkish state in July 2015. Since then PKK terrorist attacks have killed more than 800 security personnel and claimed the lives of over 310 many civilians, including women and children, while more than 10,000 PKK terrorists have been killed or apprehended in army operations.