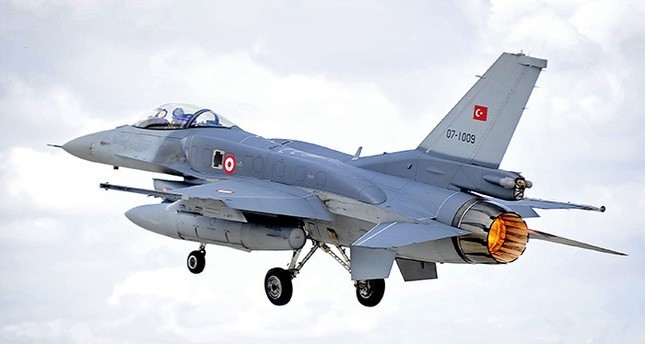 An F-16 Fighting Falcon of the Turkish Air Force takes off on a sortie
by daily sabah Nov 23, 2016 12:00 am
The outlawed terrorist group PKK's Syrian offshoot Democratic Union Party (PYD) and its armed wing Peoples' Protection Units (YPG) have threatened to shoot down Turkish jets after the Turkish military pounded YPG targets in Manbij.

Manbij Security Council released a video and issued a stern warning to the Turkish military, saying that Turkish warplanes targeting YPG targets in and around Manbij will be shot down.

Four PKK/PYD-affiliated Syrian Democratic Forces (SDF) targets were destroyed by Turkish jets in the Yulanli and Qurt Wiran regions of northern Syria last week, killing a militant and injuring a few others.

Turkey is determined to clear YPG presence in Manbij and has already given multiple warnings to the U.S. saying that the YPG must leave the area and retreat to the east of the Euphrates. The terrorist group, however, is yet to comply.

President Recep Tayyip Erdoğan yesterday said the next target for the Turkish military after liberating al-Bab will be Manbij, as part of Ankara's plan for a terror-free zone in Syria.

Saying "Manbij does not belong to the YPG," he asserted that Turkey will not let the YPG remain in the town.

Erdoğan railed at the Iraqi and Syrian governments as well. Underscoring Iraq and Syria's inaction against the PKK in their countries Erdoğan said terrorist attacks in Turkey originated from those countries.

"Where are the PKK's bases? All of them are in Syria and Iraq. They said they were not powerful enough when we asked them to take action against Qandil. We did what was necessary with our jets. Sinjar, Tal Afar... It has to be sorted out," Erdoğan said.

The president affirmed that Turkey will "get rid of" terror problems by 2023. "It is a matter of survival for us. It is a humanitarian issue for us," he said.
RELATED TOPICS