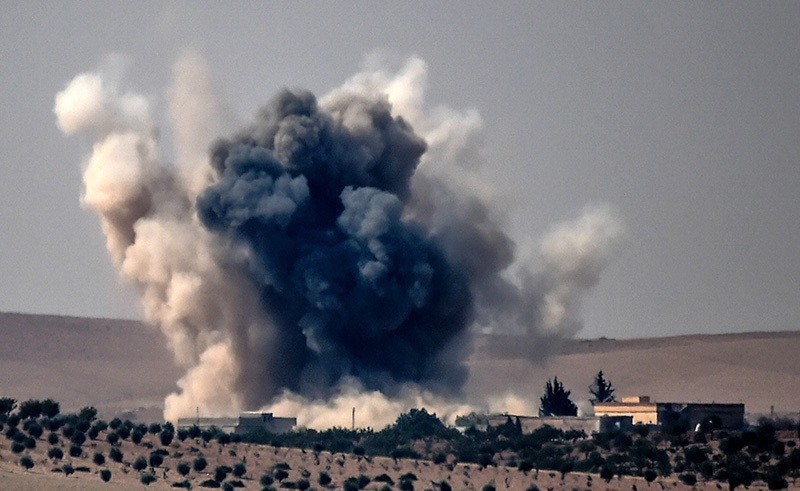 | File Photo
by Daily Sabah with AA Dec 07, 2016 12:00 am
The Turkish military hit nine Daesh terrorist targets as part of Operation Euphrates Shield in northern Syria, it was reported on Wednesday.

Four Daesh shelters, three headquarters and a tank were also destroyed in the airstrikes.

Over 215 residential areas, including more than 1,800 square kilometers (694 square miles) of land in northern Syria have been cleared of Daesh terrorists as part of the operation so far.

Meanwhile, speaking at a press conference in Ankara, Presidential spokesperson Ibrahim Kalın said that the operation has been moving forward as per the planned strategy, particularly the offensive on Syria's al-Bab.

"The operation is continuing decisively and as planned. Particularly, due to the Daesh terror organization's intense stocking, it is important to be very cautious in the offensive on al-Bab. As of now, a 1800-square-kilometer area, from Jarablus to Azaz and to the south of Azaz and al-Bab region, has been completely cleared of terrorists," Kalın said.

Ankara has been pushing southward, supporting FSA forces as part of Operation Euphrates Shield launched on Aug. 24, to now clear al-Bab from Daesh terrorists and form a terror-free zone of 5,000 square meters comprising of the towns of al-Bab, al-Rai, Azaz, Jarablus and Manbij. The terror-free corridor will ensure security for Turkey's southern border with Syria, while providing a safe shelter for locals in the region, which would stop the mass influx of refugees coming into Turkey.

Kalın also said that Turkey's stance toward Manbij has not changed. "The YPG elements were supposed to be leaving [Manbij]. It's the same with Raqqa, the operation there [Raqqa] must also be carried out similarly." Turkey has repeatedly argued that YPG forces have displaced the Arab and Turkmen locals from areas cleared of Daesh, in an aim to change the demographics of the region and assume full control over the captured areas. Both President Erdoğan and Prime Minister Binali Yıldırım have repeatedly voiced concern over such adjustments, saying the fight against Daesh should be executed through supporting local forces.