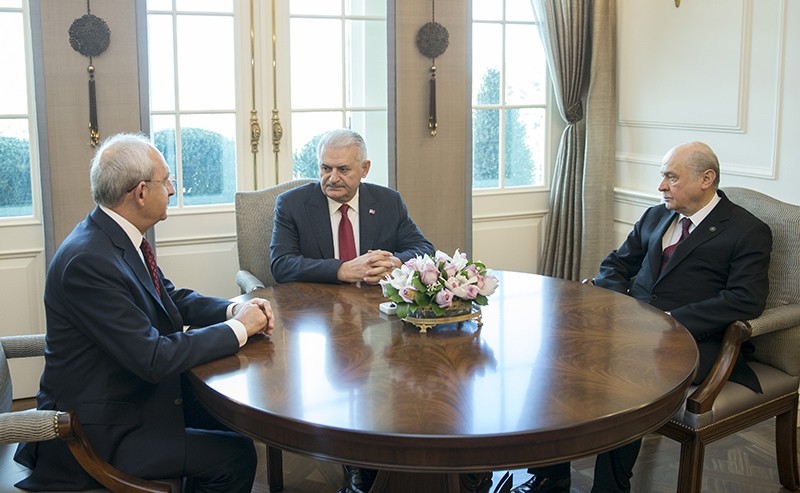 Speaking to the press in a joint press conference after a two-and-a-half-hour meeting in Ankara on Wednesday, Prime Minister Yıldırım said both the CHP and the MHP have agreed to support Turkey's fight against terrorism, while conveying some of their concerns to the government. "The issue of terrorism transcends politics," Yıldırım said and added that the ongoing anti-terror operations along Turkey's borders are a matter of the country's future. "The fight against terrorism in southeastern Anatolia and on our southern border is crucial for the survival of our country. It is all about our future as a country. We have evaluated these issues thoroughly and had the opportunity to share this information with the respective chairmen. We have also taken their opinions about the situation in consideration, and we have noted their suggestions," Yıldırım added.

CHP Chairman Kılıçdaroğlu said Yıldırım has informed both leaders about the current situation, while adding that all parties should support the fight against terrorism as it affects everyone. CHP Chairman Kılıçdaroğlu said: "Terror causes suffering; therefore, we should stand united against terrorism. We have expressed our opinions clearly and relayed our suggestions to Prime Minister Yıldırım. We have to put an end to terror."

In a statement released following a central executive board committee earlier on Wednesday, CHP said that the party is ready to provide support to the government in its fight against terrorism.

MHP Chairman Bahçeli, on the other hand, said all political parties must ensure that counter-terror operations proceed with the utmost determination. Continuing by saying the meeting was productive and happened in a positive atmosphere, Bahçeli said: "This meeting called by Prime Minister Yıldırım, which aimed to evaluate Turkey's fight against terror, was held with a level of maturity demanded by the Turkish people. Political parties are in support of the decisive and relentless fight against terrorism."

Prime Minister Yıldırım thanked the chairmen of both parties for their contribution to the meeting.

The ruling AK Party, the main opposition CHP and MHP signed a joint declaration condemning Saturday's terrorist attack, while the Peoples' Democratic Party (HDP), which is criticized for supporting PKK terrorists, refrained from signing it.

Saturday's twin terror attacks by the PKK's offshoot TAK -- one by a bomb-laden car and the other a suicide bomb -- against riot police near Maçka Park killed 44 people and left 155 wounded.