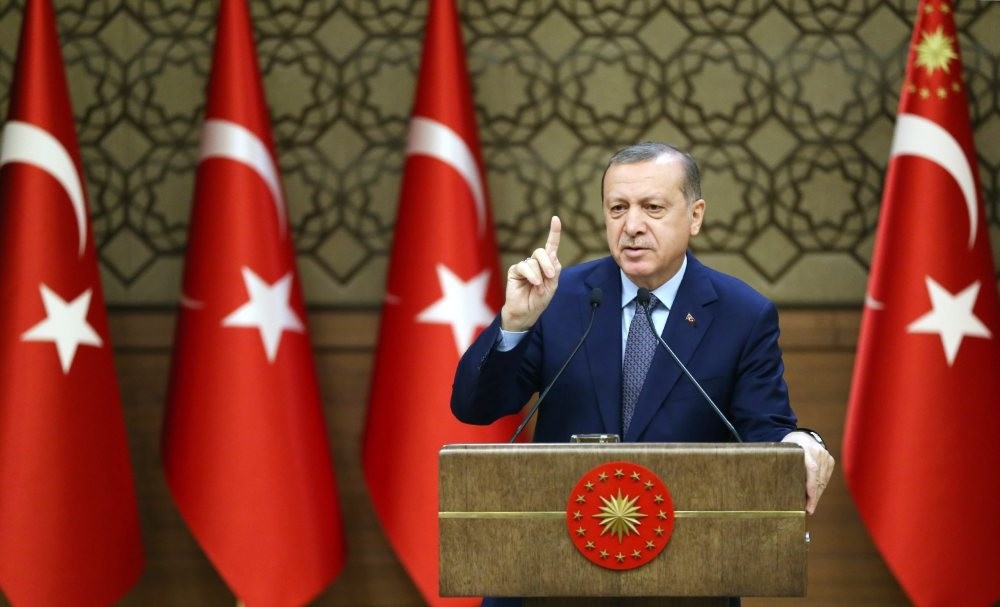 As Turkey struggles with deadly attacks by different terrorist groups, President Erdoğan called on the nation to mobilize while the state adopts a new counterterrorism strategy to hit terrorists wherever they are

Amid bloody terrorist attacks across the country targeting its national security, Turkey has adopted a new counterterrorism strategy to hit the terrorist groups in their "nests." "We will not let them organize themselves in winter, as we will destroy them in the places where they hide, their caves and havens," Interior Minister Süleyman Soylu said on Wednesday, introducing Turkey's new strategy. Interior Minister Soylu's remarks were quickly followed by President Recep Tayyip Erdoğan's call to stand up against terrorist groups. President Erdoğan declared national mobilization against all terrorist groups, including the PKK, Daesh and the Gülenist Terror Group (FETÖ), and he urged the international community to support Turkey's counterterrorism efforts.

Erdoğan also added that he made the call as his constitutional right.

Ankara also asserted that it will not hesitate to hit terror groups wherever they are. Turkey currently fights the PKK at home, while it fights Daesh and the PKK's Syrian offshoot, the Democratic Union Party (PYD) in Syria.

President Erdoğan shared information regarding deceased terrorists and slain security officers since the restart of the armed conflict against the PKK terrorist group.

"A total of 9,500 PKK terrorists have been killed, injured, or captured since the start of Turkey's anti-terror operations," Erdoğan said, adding that in Syria and Iraq, Turkey has killed 1,800 People's Protection Units (YPG) and Daesh terrorists.

The president asserted that Turkey will do whatever it takes to defend the rights of the oppressed.

"We know the game that they are storing up in Syria with the pretext of fighting Daesh," he said.

Ankara has recently employed a new, intensified anti-terror strategy, both in its fight against terror groups inside Turkey, as well as in its cross-border operations, where terrorists are being engaged before they are able to carry out attacks in Turkey.

Minister Soylu recently emphasized that anti-terror measures taken by Turkey are also important measures for the region beyond the country's borders.

On Saturday, at around 10:30 p.m. (1930GMT), a car bomb went off in Istanbul's Beşiktaş district, followed by a suicide bomb attack in Maçka Park in the same neighborhood, less than a minute apart. The majority of victims among the 44 dead were police personnel.

The PKK organization has so far killed 843 Turkish security personnel and 335 civilians since July 2015, Erdoğan said. The president said more than 40,000 people linked to the group had been detained so far, while over 10,500 people were remanded in custody.

"We do not have a country other than the Republic of Turkey. Everyone should know we will not allow anyone to take anything away from our country," the president added.

Advanced weapons to be deployed by March, says interior minister

Interior Minister Süleyman Soylu on Tuesday said a series of high technology weapons will be deployed in field operations as early as late February or March next year, an action which is expected to deal a heavy blow to the outlawed terrorist group the PKK.

Speaking in Turkey's southeastern province of Hakkari, Soylu issued a stern message for the PKK, saying, "We will introduce such technologically advanced weapons that they [PKK terrorists] will not be able to step outside their caves."

The minister also said the Turkish state took firm steps towards renewing the weaponry in its military arsenals.

He added that the HDP failed to reach any of its goals through its unwavering support for the terrorist group.

The interior minister vowed the PKK would be wiped out completely in April, and said: "I am saying it clearly these are their [PKK's] better days. After April, they will be surprised to see what is happening to them. Their end is near."